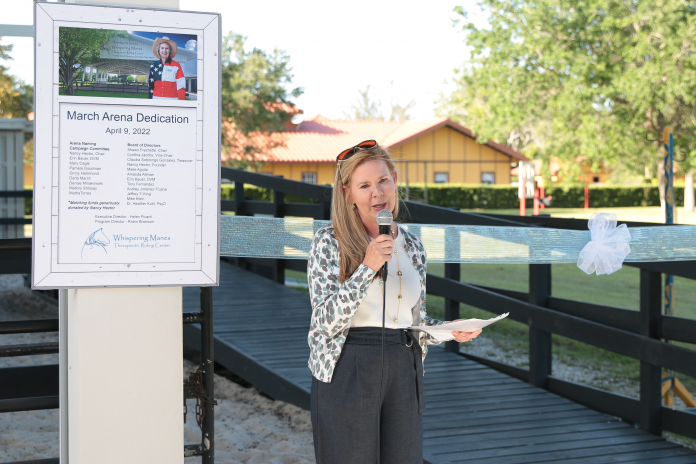 MIAMI FL (April 6, 2022) –In a lasting tribute to one of Miami’s foremost champions for people with disabilities and women and children’s causes, Whispering Manes Therapeutic Riding Center has dedicated its state-of the-art outdoor riding arena in honor of Marilyn March.

A tireless advocate for the physically challenged, elderly or disadvantaged, and for abandoned, abused or neglected children, March was also dedicated to women’s causes including equal pay and employment opportunity and freedom from domestic violence, sexual assault, and human trafficking. A past Executive Director of The Women’s Fund of Miami-Dade, she was very active with CHARLEE and Easter Seals, and served on the Board of Directors for Whispering Manes.  March passed away after a lengthy battle with Pancreatic cancer in May of 2020.

“Marilyn was a guiding light and beacon of hope for so many in the Miami community. She will never know how many lives she deeply touched, including mine. Her legacy lives on in this community, and we are humbled and grateful to be able to honor her by dedicating this outdoor arena allowing children and adults with disabilities to experience the life changing benefits from therapeutic horseback riding,” said Nancy Hector, founder of Whispering Manes.

More than $200,000 was raised for the effort to maintain the covered arena that allows instructors to provide necessary therapeutic riding classes regardless of weather conditions. Hector provided a matching grant of $100,000 with the Women’s Fund of Miami-Dade, raising more than $50,000 toward the naming campaign. In all $215,545 was raised.

During the ceremony a proclamation from Mayor Daniella Levine Cava was presented by Pat Morris, Director of Civic and Philanthropic Partnerships and a Congressional Record was presented from Congressman Carlos Gimenez

“As a past PTA president, she successfully argued before the School Board that classrooms with children with special needs would benefit from air conditioning to help keep their attention, which prompted the School Board to go one step further and air condition all the schools. She was kind, gentle, and compassionate, but also a force that wouldn’t take no for an answer,“ added Hector. “She is missed terribly.”

Whispering Manes is a horseback riding facility for the disabled located at 6105 SW 125th Avenue, benefitting children and adults with special needs or disabilities by offering them the opportunity to interact with dedicated horses in a manner that promotes physical, mental, and emotional wellbeing. Whispering Manes fosters therapeutic relationships with horses, crossing boundaries of speech and physical disabilities in a way that encourages healing and improved self-esteem.

Founded In 2010, by Nancy Hector, a philanthropist and champion of children’s causes, recognized the need in Miami-Dade County for a place where children and adults with disabilities could interact with horses in a therapeutic program. Mrs. Hector also recognized the poor accessibility of such centers to those who need it the most, so she first purchased the farm Whispering Manes because of its central location. In 2011, Whispering Manes Therapeutic Riding Center was formally established as a federally recognized 501(c)3 corporation dedicated to providing equine assisted activities to children and adults with disabilities.

At present, Whispering Manes serves up to 80 participants per week ranging in age from 5 to over 70 years old.  There are over 150 people enrolled in its equine assisted activities program annually, including current and former members of the armed services, participants from multiple local special education and Miami-Dade public schools, the Down Syndrome Association of Miami, Miami Cerebral Palsy Residences, and private individuals. Whispering Manes also strives to promote strong community ties by drawing on more than 100 volunteers from local service organizations, high schools, and individuals.

A PATH International Premier Accredited Center, Whispering Manes has achieved the GuideStar Gold Seal of Transparency and has been rated a top-rated nonprofit by Great Nonprofits every year since 2013.