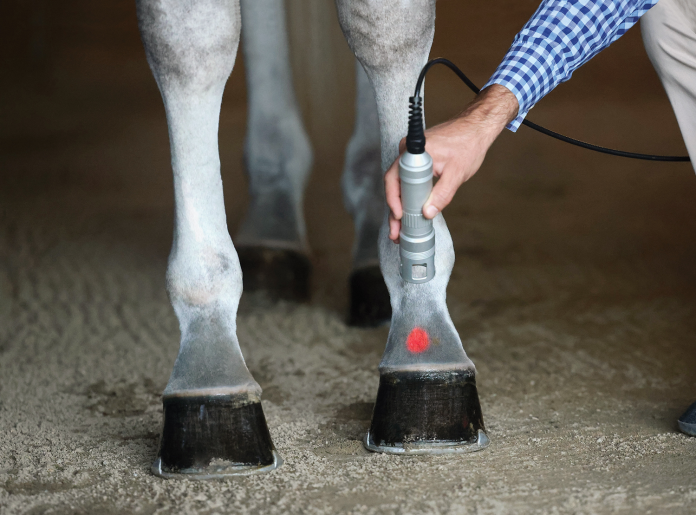 Injury prevention, recovery, and rehabilitation are crucial to the health and performance of show horses. As a professional Grand Prix rider, Florian Moreno found himself looking for the right support to help his horses, and cryotherapy was his answer. After seeing the benefits and abilities of cryotherapy firsthand, (the technique utilizes freezing temperatures to promote healing) he established America Cryo.

America Cryo offers a range of products and devices that aid in rehabilitation and recovery while providing preventative care. Pairing the top medical devices with cutting edge science, America Cryo products can make an immediate difference in the performance and health of show horses.

Moreno grew up in France and began riding at the age of four, and eventually established a career as a professional rider. He competed at the Grand Prix level for years, where he was first introduced to the science of cryotherapy.

“I found out about cryotherapy from my veterinarian. At the time, I had a horse rehabilitating from an injury and it really helped to shorten the recovery time,” says Moreno.

After shifting his career from riding and competing to buying and selling horses in France, he decided to make the move to the U.S., where he met his wife, Ali Leopold Moreno. Together, they own Leopold Farms based out of Calabasas, CA.

“I ride and sell horses with my wife, so I’m still very connected to the horse world,” he says. “But at the same time, I started my medical device company, where we manufacture and develop medical devices for humans and equines.”

Moreno’s first step to developing America Cryo was to reach out to the company that manufactured the first cryotherapy device that he had used back in France. He began distributing their products, and then started manufacturing accessories and selling them. Today, he owns America Cryo, and his products are manufactured in the U.S.

When he first began selling, Moreno was surprised to learn that cryotherapy was not well known in the U.S. but had been on the market for almost 20 years in Europe. However, after being in business for almost eight years, it is now a common practice for humans and horses in the states.

While America Cryo offers more than just cryotherapy, their Subzero Equine Cryotherapy device is their most popular among equine treatments. Subzero therapy uses pressurized CO2 to target specific areas on the body and provides pain relief and faster injury recovery for both humans and equines.

“With the device, you can treat any area of the body. You are not limited to certain areas like if you were to use an ice pack,” says Moreno. “The treatment time is very fast, it’s 30 seconds to one minute per area. The outcome outlasts, by far, any other type of cold treatment. It’s better than an ice bath, it’s better than ice packs, because it blows carbon dioxide at -110 degrees Farenheit on the body. By doing so, we lower the skin temperature from 89 degrees to 34 degrees within a few seconds, and this creates a thermal shock.”

“When you create a thermal shock in the body, you get a neurovegetative response, which is going to immediately create an analgesic effect, a muscle relaxant effect, and then in long-term effects, it will create a vasomotor and an anti-inflammatory effect. So it’s good for healing, pain relief, and swelling. It’s a very versatile product that can be used in many situations.”

A popular form of cryotherapy for humans is performed in a chamber, however, this provides a lesser effect. The Subzero Equine Cryotherapy offers localized cryotherapy, which is targeted and more effective.

With the device being handheld, you can use it on any part of your body or your horse’s body, but there are certain areas that Moreno recommends for optimal performance and recovery.

“Using the Subzero Equine Therapy device on a horse’s back helps flush out the lactic acid, relaxes the muscles, relieves pain, and de-stresses the fiber on the back,” he says. “This is also the only device where you can get the hooves this cold, because we can treat the feet from the navicular bone, the coronary band, the hoof wall, and the sole so you can attack the foot from four different angles to remove inflammation and pain. It’s helpful to take the sting away from jumping too often or too high. What people often do for preventative treatment is to treat the suspensory, as this is one of the main causes of lameness in sport horses. [Using Subzero Equine Therapy] preventatively after competition will help remove inflammation and help the ligaments recover faster.”

The device itself is very easy to use, and America Cryo offers one-hour training sessions. It is handheld, portable, and versatile.

America Cryo’s Cold Compression Therapy is another option that pairs compression with the concept of cryotherapy.

“The cold compression is a practical device in the sense that it is FEI allowed. You only need water and ice, and it allows you to treat the tendons and ligaments on the front and hind legs as well as the hocks,” says Moreno.

The Equine Shockwave is a device that is especially helpful for injuries, as it targets and speeds up recovery.

“The equine shockwave is a radial shockwave which makes it easier to handle, more affordable, more portable, and lower maintenance. It provides great outcomes for joint issues, soft tissue injuries, and pain. We create a shockwave using an electromagnetic diffuser that will accelerate a pin inside the handle that creates the wave. There are different types of tips to control how deep and how focal or radial we want the shockwave to be. It’s good to be used for maintenance and prevention with a low amount of shock, or it can be used for injury treatment with a higher amount of shock and energy.”

America Cryo offers three different laser therapy products that are all class IV superpulse. Each laser has the ability to also operate as class IIIB to provide a smaller amount of power. When you beam a laser wave, you can either do it continuously or pulsed. When you are able to pulse at a very high frequency, it is called superpulse. Studies have shown that a pulsed wave has a better and deeper interaction on the cells vs continuous, and this is why the brand’s lasers offer the superpulse option.

“We have a 10 watt with two wavelengths, we have a 20 watt with three wavelengths, and we have a 45 watt with four wavelengths,” says Moreno. “The more power you have, the shorter the treatment time is going to be. The more wavelengths you have, the more cells you can improve. The 650 is really good for superficial wound healing and skin issues, as it accelerates the healing of surface tissue and promotes cell growth. The 980 is mostly used for analgesic [purposes], as it works on the thermoreceptors and activates gait control mechanism. The 810 is good for ATP production, increasing hemoglobin oxygenation.”

One product that is distributed by the company but not manufactured by them is the Equine Infrasound: G5 Equitec, which is FEI allowed.

“The Equitec is a circulatory vibration device. It’s very helpful to prepare before a class, or with a different setup it’s very good for recovery as well,” Moreno says. “It uses infrasound waves to treat specific areas and can reach down to the muscle and provide immediate results, and has therapeutic benefits.”

While recovery and injury prevention are common practices in the care of our horses, it’s also important to take care of our human bodies as well. The Subzero and Cold Compression devices are able to be used by both horse and human, providing not only medical benefits for humans but aesthetic benefits as well.

“The subzero device was developed for orthopedic issues, pain relief, and anti-inflammatory recovery, but we found a few years ago that the technology also has aesthetic benefits as well, it can be used for facials, hair growth, and it can also be used for body sculpting by freezing fat.”

With America Cryo, you are able to not only aid in recovery, but take preventative steps to avoid injury. These revolutionary products work to deliver the most targeted and effective therapy to make visible differences in the health and performance of both equines and humans.

*This story was originally published in the April 2022 issue of The Plaid Horse. Click here to read it now and subscribe for issues delivered straight to your door!

Side Saddle is Back!