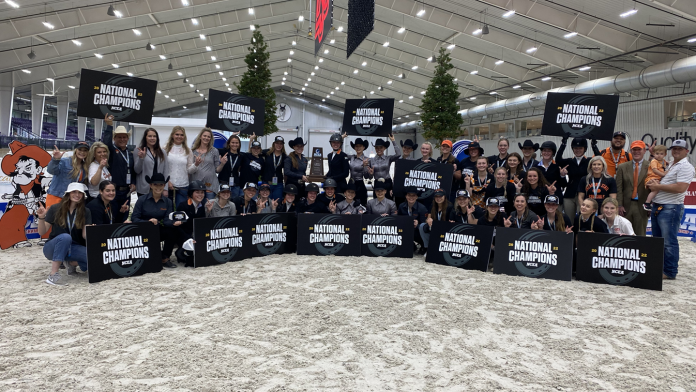 The day started off in Reining where Texas A&M won the event 3-2. Jojo Roberson defeated Taylor Masson 214-212.5 to take the first point of the day. Emmy Lu Marsh tied things up with a 213-204 win over Stephanie Helsen. Quincee Clark upended Keesa Luers 217.5-211.5 to lead 2-1. Lisa Bricker and Marissa Harrell won the final two points to lead by one going to Flat.

The Cowgirls tied the meet at the halfway point as they won Flat 3-2. Abigail Brayman, Katie Pelzel and Hope King garnered the first three points to gain a 5-3 lead until Kaitlyn Lovingfoss and Devon Thomas defeated their opponents to make it 5-5.

In Horsemanship, things remained tight. Maddie Fussell narrowly defeated MacKenzie Chapman 223.5-222 to regain the lead. Hayley Riddle tied up the meet once again with a 226-207 victory. Claire McDowall and Jojo Roberson claimed the next two points to lead 8-6. Cori Cansdale upended Natalie Vargo 225.5-221.5 to make it a one-point meet headed to the final event.

Closing out the day, OSU won Fences 3-2 to clinch the competition. Morgan Rosia routed Abigail Brayman 236-234. Emma Paycna and Riley Hogan were victorious in their rides as the Cowgirls led 10-8 with two rides to go. Devon Thomas topped Hope King 263-251 to come within one (10-9), but Sydnie Ziegler won her ride by a point and a half (250.5-249) to garner the win.

The No. 3 seeded Lynchburg Hornets were crowned the 2022 NCEA Single Discipline National Champions. Lynchburg gained an early lead, winning Fences 3-1. Fallyn Belcastro topped Britt Larson- Jackson by one point, 250-249, to garner the first point. Jacqi Needle won the second point with a 204-0 victory. Emma Schweizer took the third point for the Hornets with a 242-232 win over Katherine Atherton. Emmy Longest claimed the lone point for the Vixens, upending Kelley McCormick 208-198.

In Flat, the Vixens and the Hornets split the event. Sweet Briar garnered the first point as Katherine Atherton won 243-0. Schweizer topped Longest 234-169 to lead 4-2. Sweet Briar’s Kacie Freeburg upended Taylor Herzog 225.5-220 to push the meet to the final point. McCormick clinched the win with a 240-239.5 victory.

Taylor, Harris Insurance Services (THIS) was founded in 1987 to provide specialized insurance for all types of equine risk.We place our policies with the highest rated and most secure carriers, meticulously selected for reliability and prompt claims settlement. We are proud of our worldwide reputation for responsive and courteous service, and we welcome the opportunity to discuss your equine insurance needs and provide you with a quote.