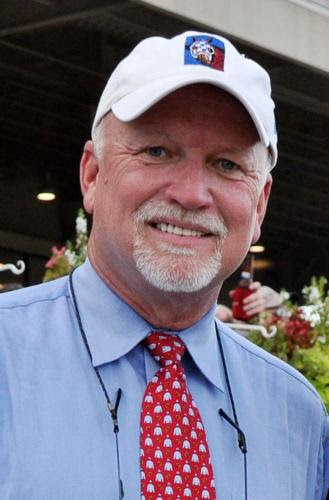 Glenn graduated from Fauquier High School in 1975 and from James Madison University in 1980 with a degree in journalism. After serving as horse sports editor of the Fauquier Times-Democrat, Glenn continued to follow his passion serving many impactful roles in the Virginia thoroughbred industry. In his decades-long career, he spearheaded the Virginia Thoroughbred Association with three separate terms as Executive Director, playing an integral role in the industry’s efforts to bring pari-mutuel wagering to the Commonwealth and the formation of the Virginia Breeders Fund. He also served as a senior advisor to the Maryland Jockey Club during the development and opening years of Colonial Downs Racetrack in New Kent, Virginia. Prior to his work at the VTA, Glenn played a key role at EMO Insurance with Ernie Oare, serving as Operations Director where he was instrumental in the formation of racing, breeding, and pinhooking partnerships and the formation and operation of EMO horse and farm insurance. He also worked in partnership with Tyson Gilpin for many years at the Stallion Service Bureau as a bloodstock advisor. In addition to these roles, Glenn served as Interim Executive Director of the Virginia Horse Center, a job he dearly loved, from April 2014 to January 2015, and served as a member, and later chair, of the Virginia Horse Industry Board, appointed by former Governor Mark Warner.

John Nicholson, VHCF CEO 2015-2021, offered this about Glenn’s time at the VHCF:
”In the spring of 2014, as I was retiring as Executive Director of the Kentucky Horse Park, Ernie Oare called and asked me to be a consultant for the Virginia Horse Center. He told me, also, that he had hired Glenn D. Petty as the interim CEO….” Please click HERE to continue reading.

Long time friend and business partner, Ernest Oare shared his memories:
“My association with Glenn really began in the late 60s when we would load up some horses and head to the Petty’s family farm, Gibraltar Farm, in Markham, VA to enjoy the wonderful schooling shows that they produced. Glenn was a pony jock in those days, and the love of the horse never left…” Please click HERE to continue reading.

The Virginia Horse Center Board of Directors will be adopting a Resolution recognizing Glenn D. Petty and his contribution to the Foundation.

From the Virginia Horse Center Foundation Board of Directors, as well as current and past staff, we offer our sincerest condolences to the Petty family at this time. The service will be held Friday, May 20, at 2:00 PM at Saint James Episcopal Church, 73 Culpepper St.,Warrenton, VA.

You may read the obituary for Glenn Douglas Petty HERE.

This Post Brougt to You by: Mane ‘n Tail