Home Blogs The Two-Horse Job: How Leverage Took Its Viewers Behind the Scenes of... 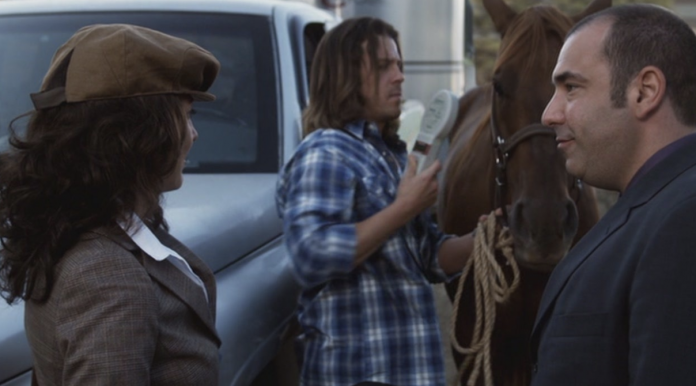 Horse racing is seen by the world as a noble sport with centuries-long tradition, celebrated athletes, and even more celebrated horses. What the average human doesn’t see is what goes on behind the scenes – the business of this noble sport. For most, horse racing is little more than a spectacle and live betting. One episode of Leverage that aired in 2008 shed a bit of light on what goes on behind the curtain – and it did it in the most fun and satisfying way possible.

For those unfamiliar with it, Leverage was – and still is, in some form – a popular TNT show created by Chris Downey, John Rogers, and producer Dean Devlin, about an unlikely crew of reformed crooks helping out those in need. The show had 77 episodes in five seasons, with the crew “stealing” everything from a country talent show (thanks to actor and country singer Christian Kane) and the Fashion Week. And, of course, a million-dollar horse.

Leverage ended its run in 2012 but was recently revived by Amazon via IMDb TV.

Horse trainer Willie Martin is framed for burning down his own stable for the insurance money. Baltimore, the only surviving horse from the stable, is taken from the trainer – it also inhales the smoke, rendering him unable to race. The culprit is not him, of course, but Wall Street investor Alan Foss, the owner of the horses, who planned to pocket the money after the animals didn’t run as he expected.

Martin wants to be cleared of the charges and Baltimore back. For this, he has to take on the investor and the insurance investigator James Sterling, who is every bit as sneaky and smart as our team of reformed criminals.

The crew decides to run “The Lost Heir”, a classic con involving a “long-lost offshoot of a royal family” – but instead of a blue-blood cousin, the noble blood is represented by the fastest horse in Kentucky.

The crew’s hitter, Elliot – played by Christian Kane – poses as a trainer, and the mastermind – played by Timothy Hutton – acts as a rich horse owner. To make sure the con is a success, they also come up with a sheik with deep pockets, and an attractive lady acting as a mediator. And, of course, an investor willing to buy the “horse”.

As usual, things don’t go exactly as planned – plot twists like a roadblock or a steamy encounter with an ex make the story more complicated than needed. The investor has the idea to create a consortium to own and run horses and make a lot of money. To this, he recruits several of his colleagues (and their money) to invest in the “lost heir”.

After a few complications, the crew cons Foss into paying up, and they also make sure Baltimore ends up in the right hands – those of Willie Martin, who treats him as a living being instead of an asset.