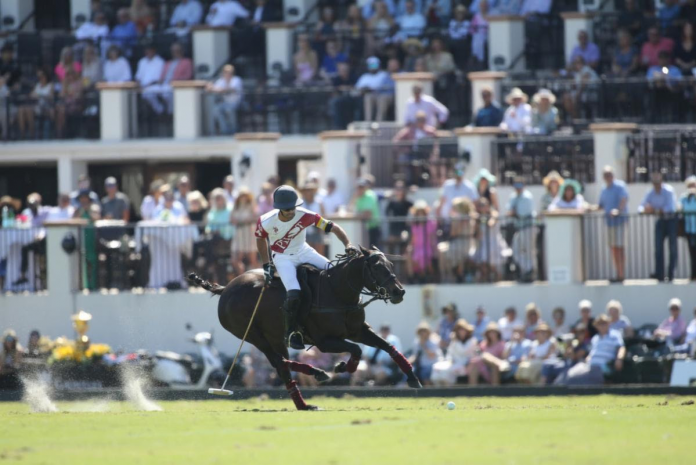 The United States Polo Association is pleased to announce that it has purchased the core assets of the International Polo Club Palm Beach in Wellington, Florida (“IPC”). The USPA has acquired 161 acres from WEP Polo LLC and WEP Polo Operations LLC, including Fields 1 through 5, the IPC grandstand, the Pavilion, the Mallet Grille, the Seventh Chukker, the USPA Clubhouse shop, the Outback Field, the Outback facility, and the IPC social club and its facilities, including a swimming pool, gym, and tennis courts.

The IPC property will be called “The USPA National Polo Center – Wellington” (“NPC”).

The purchase brings to life the USPA Board of Governors’ vision of a USPA-owned “Sunday Field” that will serve as the permanent center of polo in America and set the standard for excellence in polo. That vision was first articulated by USPA Chairman Stewart Armstrong in an essay called The Sunday Field that appeared in the Spring 2020 issue of Hurlingham Polo Magazine.

Mark Bellissimo, managing partner of Wellington Equestrian Partners (“WEP”), and Wellington’s largest private landowner, commented, “The sale of IPC to the USPA is part our ‘Wellington 3.0’ strategy which is focused on strengthening both the equestrian venues and the core lifestyle elements that are critical for Wellington’s long-term success. We chose the USPA over competing offers and real estate development strategies to ensure that this fundamental pillar of the Wellington equestrian domain will be here for the next 100 years. I was inspired by Stewart Armstrong’s vision and believe the USPA has the commitment and resources to take this venue and the sport of polo to the next level which is a win for all involved.”

The USPA will continue to host the Gauntlet of Polo® at NPC, but it will also use the facility to support polo played at the medium- and low-goal levels. The USPA intends to keep substantially all the current IPC staff in place. Tim Gannon, co-founder of Outback Steakhouse and three-time winner of the U.S. Open Polo Championship®, will serve as Chairman of the Board of a newly formed USPA subsidiary created to revitalize the social club and hospitality facilities.

With its ownership of the National Polo Center, the USPA has secured a perpetual home for polo in America that will serve the same function as the AAP-controlled Palermo fields and AAP-owned Pilar fields do in Argentina. In short, the facility will enable the USPA to showcase its tournaments, develop American players, and sustain an environment that will retain and attract new players and sponsors at every level. It will also secure the future of winter and spring polo in South Florida, which many of the sport’s key participants from throughout the country rely on as a major source of the annual income that allows them to participate in polo at their summer and fall club locations.

Through its use of NPC, the USPA aims to promote excellence as the goal for all who play polo in America. The USPA is confident that continuing to strive for excellence will lead to even greater demand for polo. Excellence means many things – among them are first-rate facilities to present the sport in the best light, intelligent rules, fair handicapping, quality umpiring, and a level playing field for all. It inspires both amateurs and professionals to be their best and play with the best and it results in an engaging experience for players and spectators. Excellence requires commitment – it doesn’t happen on its own.

Beginning this year with the FIP World Championship, which will be hosted by the USPA at Valiente Polo Farm and NPC from October 26 through November 6, 2022, the USPA plans to open the annual Wellington polo season in October. This expansion of play dates will allow USPA member clubs in and beyond Florida to play their tournament semifinals and finals at the National Polo Center when it is not being used for the Gauntlet®.

“The investment in a high-profile Sunday Field will enable the sport and brand to control our destiny for future generations,” said J. Michael Prince, President and CEO of USPA Global Licensing, which manages the global, multi-billion-dollar U.S. Polo Assn. brand. “With a global footprint across 190 countries, we view the Sunday Field as a unique opportunity to highlight U.S. Polo Assn.’s authentic connection to the sport and build additional global brand awareness. Additionally, this opportunity will create an epicenter of polo to promote not only high-goal events such as the Gauntlet of Polo®, but also other best-in-class opportunities at all levels supporting key polo competitions and demographics, such as international, low-goal, medium-goal, women’s, intercollegiate, interscholastic, youth and many others.”

Wellington Village Manager Jim Barnes is enthusiastic about the USPA expanding its footprint in the Village. “Wellington welcomes the USPA’s purchase of the former IPC facility and the establishment of the National Polo Center, which will ensure polo’s permanent and important presence in the Village for the mutual benefit of the polo community and Village residents.”

Widely regarded as the winter hub of world-class equestrian competition, Wellington has played a critical role in the development of the sport of polo in the United States and abroad since the 1970s. Every January through April, the Florida high-goal season attracts the world’s top polo organizations, highest-rated professionals, and top horses. South Florida is the home of the USPA and USPA Global Licensing, as well as the Museum of Polo & Hall of Fame and the Polo Training Foundation.