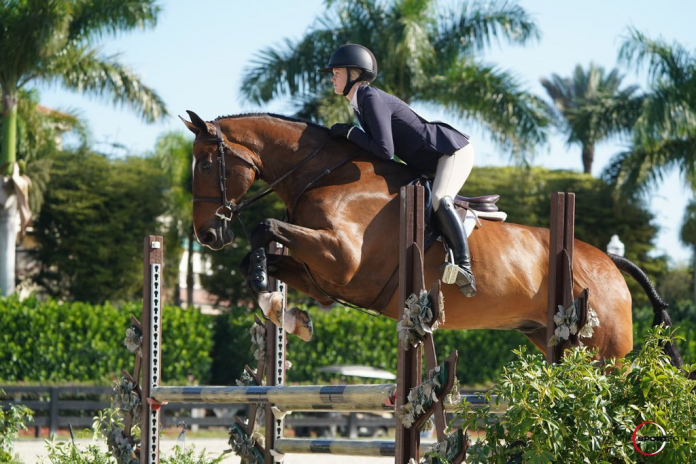 Catherine Kramer, an 18-year-old from Indiana, will begin her career as a student-athlete on Baylor University’s Hunt Seat Equestrian Team this fall after a successful junior career in the equitation and hunter rings. She currently sits at the top of the standings for the THIS NHS Adult Medal.

“I started riding when I was five years old at a local farm in Indiana, just taking lessons once a week through family friends. That was really the only sport that stuck,” says Kramer. “I’ve tried every sport when I was little—soccer, gymnastics, ballet, fencing, all the sports. Nothing really took off like horseback riding did, and I found an immediate attraction to it.”

After competing at the local level as a young rider, she moved to Abby Blankenship’s Three Ships LLC with the aim of showing within a more competitive circuit. During her junior years, she competed in the THIS National Children’s Medal, several 3’3” and 3’6” equitation medals and the 3’6” junior hunter division. Now competing as an adult, she shows in a variety of equitation medals as well as, the 3’3” Amateur-Owner Hunter division.

“I was sad to leave everything I’ve been competing in for years as a junior, but being an amateur [has] actually given me a different perspective of the sport,” she says. “It’s definitely a lot more fun; I’ve always had fun in the sport, but there’s a lot less pressure involved around the equitation especially [as an amateur rider]. It’s more focused on having fun and doing your best, and I’ve grown to appreciate that a lot more than I thought I would have.”

Kramer competes in the equitation on a horse named Gotye, who is owned by Lisa Carlsen.

“Gotye is definitely a good mix of mellowness and playfulness,” says Kramer. “He’s a very sweet horse, and he’ll always try his best for you. So, I really appreciate how much he works for me.”

While Kramer had only competed in the hunters until age 14, after showing in her first equitation class, she fell in love with the discipline.

“I became attracted to it, because it offered this different outlook on the sport. It was a lot more detail-oriented, and it allows the rider to work on the technical aspects of their riding,” says Kramer. “It has allowed me to grow as a rider and learn a lot of things that I will be able to take with me when I go to college and  apply in the hunters. The THIS Adult Medal has allowed me to grow by focusing on the intricacies of my riding that need improvement.”

As Kramer prepares to attend Baylor University this August, she also has goals to compete in the indoor equitation finals in the fall.

“Horseback riding has never been a sport that’s been affiliated with a school for me,” says Kramer. “Going to college where riding is suddenly a collegiate activity and is more intertwined with school is something that I’m excited to experience because I’ve never really been a student-athlete in the traditional sense. I’m excited for the culture that it brings, the team aspect that horseback riding traditionally doesn’t have, and to develop my relationships with my coaches and teammates.”