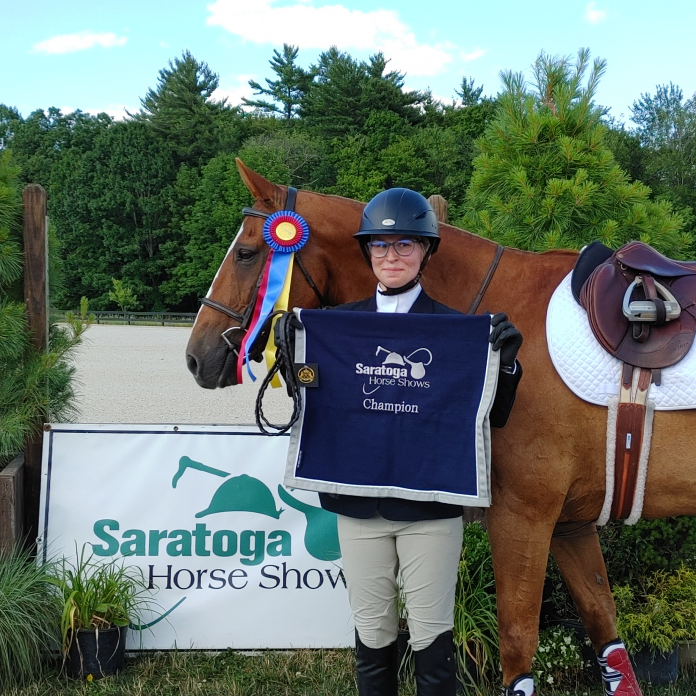 Stillwater, NY (July 18, 2022) “I won my first championship and…on my first polo pony!” exclaimed Ella Hoffman of Loudonville, NY, earning the inaugural Special Olympics New York (SONY) Summer Series championship under the discerning eye of judge and Amateur Owner Hunter Hall of Famer, Ellen Toon of South Salem, NY, at the Saratoga WIB (Women In Business) Spectacular. Hoffmann went to also laud the roached mane of her partner, Tarzan, provided by Mario Dino and Saratoga Polo School, “Plus no braids at the end of the show to take out!”

Hoffman, 21, has been riding for 12 years and has competed in equestrian competition locally as well as Special Olympics Unified Basketball in high school. This fall she will be entering a College Experience program at the College of Saint Rose in Albany.

Juno Cox of Brooklyn, NY, was tall in the saddle with Fargo, also provided by Saratoga Polo School, pinning as SONY Series Reserve Champion at the USEF A, Jumper 3* show, July 13-17, at White Hollow Farms in Stillwater. Juno is a gifted visual artist attending LaGuardia High School and rides with GallopNYC.

A third rider on the SONY Series squad, Sophie Baghdassarian, 25, of Great Neck (Long Island), NY, delivered a master class in catch riding with a winning round, on the second day of over fences competition, on Stillwater Farm’s Hanging With Mr Cooper, generously provided by Rachel and Madison Sagalyn just minutes before the class. The spunky equestrian and YouTuber has been a rider since her teens.

“Madison was so kind as to lend her horse, Cooper, and he was perfect, winning both classes,” Sagalyn said (Toon judged the SONY Series equitation class, preceding the over fences class, a three-way tie among Baghdassarian, Cox and Hoffman).  “I’m so proud of my kids, helping in any way they can.”

“I feel you [the SONY team] have been here just like any other rider,” Saratoga Horse Shows creator and executive director, Adele Einhorn told Series organizer and SONY assistant director of development, Lauren Reischer. “We’ve had great feedback from the trainers and the show staff, and see no reason why these riders shouldn’t become a regular part of this show.

“My steward cried,” Einhorn added. “She was so happy to see these riders here.”

Reischer says support and interest in the new SONY Series has been strong,  starting with the unbridled generosity of Squid Inc. trainer, coach, polo player and horse provider, Laurie Lynn Scott of Schuylerville.

“Laurie wins our ultimate MVP award,” Reischer said. “Laurie not only provided the three most wonderful, saintly horses in the world, she became our horse show mom extraordinaire, helping us feed, groom, bathe and school. This week was a success because of her.”

The Special Olympics New York Summer Show Series is a first of its kind platform that, with the support of Dover Saddlery, is providing its most advanced equestrian athletes with the chance to experience competing at three elite competitions. Launching its equitation and over fences classes under the inaugural auspices of the Saratoga WIB Spectacular (the first-ever hunter/jumper event created and operated by women, to benefit women’s health and showcasing Women In Business), the SONY Series will continue at HITS Saugerties, August 3-5, before culminating in series-end awards September 3 at the Hampton Classic on Long Island.

“We are proud to be offering our athletes this unique opportunity to showcase their talent at some of the most elite competitions in New York,” said SONY President & CEO, Stacey Hengsterman. “Thank you, to each of the venues, for including the Special Olympics in this year’s event.”

Special Olympics New York provides inclusive opportunities for people with intellectual disabilities to discover and unleash the champion within. SONY athletes experience the thrill of competing in authentic sports. They overcome defeat, taste victory and stay active for life, www.specialolympics-ny.org.

Disney Made a New Black Beauty Movie and I Have FEELINGS...