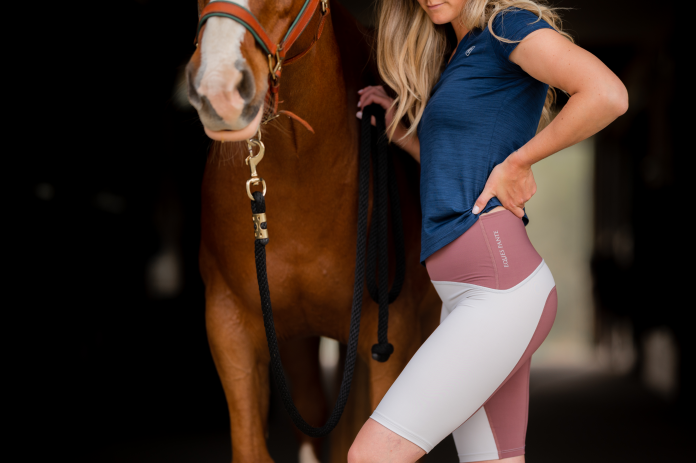 Jessica Andrews decided to take matters into her own hands after years of struggling with athletic undergarments. In 2021, she established Eques Pante, offering equestrian performance underwear. Complete with revolutionary materials, cut, and shape, Eques Pante gives riders the most comfortable fit—in and out of the saddle.

While Andrews has always been involved in the sport as a rider, prior to Eques Pante, she worked as a hair and makeup artist for red carpet events, based out of Los Angeles. Despite her vision to create her own equestrian performance underwear, her career never allowed her the time to fully develop a design and prototype. When the global pandemic hit, Andrews realized that it was her chance to develop Eques Pante. She quickly began designing and had a prototype ready four months later.

“I started riding in England, where I did a lot of cross country. When I moved to the US, I bought a young horse and decided to get into the dressage world,” says Andrews. “I began riding all these really big-moving warmbloods, and I started to get all these rashes and cuts from underwear, and I would just feel so uncomfortable in the saddle.”

Andrews began testing prototypes herself and decided to create her own blend of fabric. She created the Eques Pante blend, which is a nylon blend that is a moisture-wicking, breathable, performance fabric that additionally helps with cooling in the saddle.

“You can put them on, and it feels like you’re not wearing anything. They’re a lot cooler even though you have an additional bit of material,” says Andrews. “They really help with rashes—after riding in them, I never got rashes or hotspots again, and I really tested them in the heat of Southern California.”

The gusset area is constructed with 100% organic cotton, as Andrews did not want any chemicals or pesticides in such a sensitive area. For the comfort and longevity of the underwear, the gusset area is also seamless.

“I knew that the garment had to be very intricately designed, because the sport is very taxing on seams,” says Andrews. “The garment is designed in a way that really helps with the longevity and the durability of the garment with the seamless gusset area that I created and patented.

“The top has a slimming, contoured waistband that really helps to hold everything in, support you, and help with the durability of the garment,” she continues. “The length helps with rash protection and it helps with slippage too.”

Not only are Eques Pante perfect for riding, but they also double as a bike short as well. Whether you’re taking off your riding pants after a hot show day or using them as a workout pant, Eques Pante can be worn on its own.

“They’re invisible under the breeches, and when you wear them by themselves they’re also very flattering,” she says. “You can just take off your pants and walk around. They’re a bike short because they’re not see-through in any way.”

Since its launch in February of 2021, Eques Pante has developed a dedicated following, with sponsors worldwide from Australia to England. The Canadian Showjumping Team will proudly be wearing Eques Pante at the upcoming ECCO FEI World Championships in Herning, Denmark this August.

“What’s really nice about this product and what’s unique about it is it can be used in any of the disciplines,” says Andrews. “I have barrel racers, top dressage riders, and top show jumpers and hunter riders wearing them. I was lucky enough to get them in the hands of some really great top level riders which has really helped push the brand a little bit more. This year it looks like I’m on the road to doubling sales.”

Given Eques Pante’s uniqueness, some can be skeptical when first introduced to the bike short. However, Andrews has not received a bad review from any rider that has tested them in the saddle.

For Andrews, the success of her business means ever more because she was able to use her passion for hair and makeup to help fund and inspire Eques Pante.

“It all made sense how it happened. The reason why I got into hair and makeup was because I really loved how it made women feel confident,” says Andrews. “It’s great how I can translate that to Eques Pante because they take away all those rashes and discomfort and just allow women just to feel great in the saddle.”