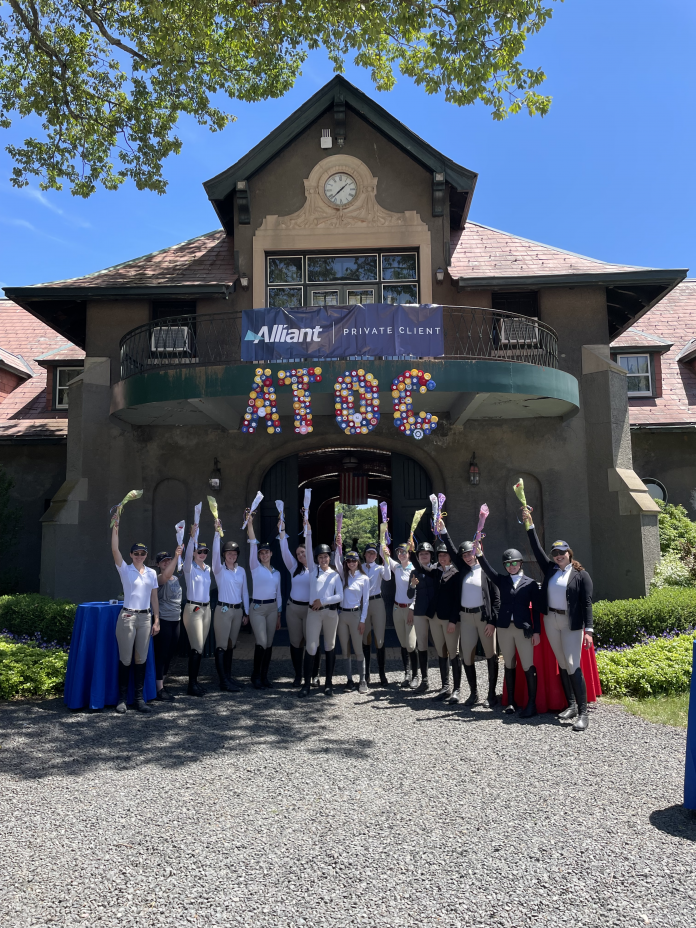 Under sunny, beautiful skies the 11th Alumni Tournament of Champions, Sponsored by Alliant Private Client Insurance was celebrated at the  iconic USET Foundation in Gladstone, NJ.  This was the first time the show was held over two back-to-back days at the same location, offering 15 individual classes, two team competitions, two sportsmanship awards, and two horse of the show awards, in addition to Saturday evening season high score awards.

A great mix of western and hunt seat riders resulted in record attendance for the IHSAA sponsored exhibitor party and awards reception held in the amazing USET rotunda. The top place and overall high score rider, out of hunt seat and western points, was Kathrn Kraft of St Mary’s of the Woods.

The always popular Campus Equestrian Reunion Fences class is open to those who were not actively showing members of the current show season. Centenary University graduate and IHSA nationals schooler extraordinaire Phillip Williamson ended up edging out Wilson College graduate Megan Mendenhall for the top spot.  Williamson said, “I thought my day was over before it started when I drew the 15.2 Thoroughbred mare,” (Williamson is 6’6″), but after his ride, he couldn’t wait to tell the horse provider how enjoyable his ride was.

One could say Mount Holyoke graduates had a stellar first experience, sweeping the future classes. The western champion was awarded to Hannah Brown, with her teammate Sara Hearn snagging the hunt seat trophy.  Another MHC grad, Sierra Dunn earned reserve in both western and hunt seat.  The IHSAA Future Alumni Cup (sponsored by IHSAA and presented by Tammy Cromonski, National IHSA representative) combines the score of an over fences round, a flat round, and a test for the top riders.  It was a pleasure welcoming 17 new alumni with the future alumni classes.  Riders were all recognized with roses sponsored by Penn State Alumni Mom Michele Rinda during the lunch break.

At the conclusion of over fences competition, a special retirement ceremony honored a longtime IHSA draw and fan favorite horse.  Briarwood draw Martel was sent off to spend the rest of his days in a lovely retirement home with former IHSA national alumni rep and strong ATOC supporter, Karen Sykes.

After all the classes were pinned, the Mane Jane Alumni Cup was awarded to a  teary-eyed, longtime supporter: University of Findlay graduate Erika Kurtz.  Along with her husband Tom and helpful barn kids, Kurtz’s Serenity Farm brought six horses for the day. To make the win even more special, she drew a horse she brought, Marley to clinch the win in the work-off.

In the team challenge, three riders join forces with people they may not have previously known to compete.  To encourage networking, teams could add bonus points for having riders from different states and competition zones.  Perri’s leather continued their tradition and sponsored the Sunday Hunt Seat championship, with each team member taking home a Perri’s Leather Halter.  Scores were tracked for each team member, with the lowest score dropped, and the win went to team “Barely Win Anything”—quite the hypocritical name!

The Midnight Minx Hunt Seat Sportsmanship award, sponsored by Jackie Annatone and voted on by riders at the show, went to Sara Lent.  The hunt seat horse of the show went to Phoenix Risings’s Artie, who went home with a nice gift certificate from Devocoux.

The Alumni Tournament of Champions is an IHSA style horse show for IHSA alumni from around the country. Riders draw horses before competing and are not able to practice on the horse before walking into the show ring. The purpose of the show is to expand opportunities for IHSA Alumni to ride in a finals type atmosphere, as many only show a few times a year with busy careers and limited funds.