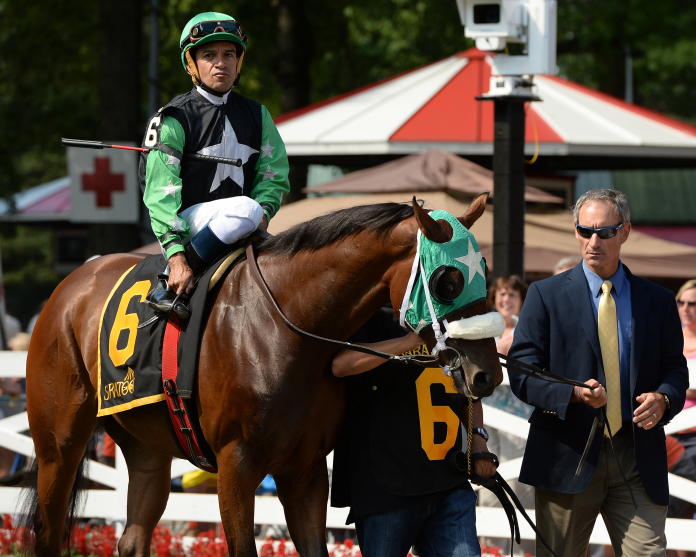 Thoroughbred owner Michael Sternklar, founder of Clear Stars Stable, has owned and raced horses in New York since 2005. Coming into the sport as a novice, he has spent the last 18 years learning about the business, including the importance of thoughtful Thoroughbred retirement and retraining. For his $5,000 contribution to the TAKE2 Second Career Thoroughbred Program’s 10th Anniversary celebration, Sternklar is recognized as TAKE2’s July’s “Donor of the Month.”

TAKE2, founded in March of 2012, set a goal of raising $10,000 a month for 10 months in honor of its milestone anniversary. With the generous help of previous “Donors of the Month” Len Green and the Green Group, TAKE2 competitor Patricia Hurter, Empire Racing Club’s Kyle Emmich, and the New York Thoroughbred Breeders and New York Thoroughbred Breeding and Development Fund, the campaign is ahead of its goal. Many more Thoroughbred lovers have contributed, raising more than $48,000 with 10 days to go before the half-way mark.

When Sternklar decided to get involved in racehorse ownership, he asked his friend, artist Michael Geraghty, for a trainer recommendation. Geraghty suggested Rick Schosberg, who for the last decade has led the New York Thoroughbred Horsemen’s Association TAKE THE LEAD retirement program, and Schosberg and Sternklar have worked together ever since.

“I wanted to throw myself into it and learn everything I could,” said Sternklar. “And Rick said, ‘This game needs young owners, and I’m here to teach you.’”

Sternklar stressed from that first meeting that he wanted to do things “the right way,” establishing ownership groups that care about the horses and putting the horses’ health first.

“Our group couldn’t be more supportive,” he said, “when it comes to giving horses down time or retiring them. We embrace what Rick has always wanted to do: we want to win, but we want to do it the right way.”

Together, Clear Stars and Schosberg have campaigned dozens of horses, with the trainer often an ownership partner. They purchased New York-bred Myfourchix for $90,000, and the Henny Hughes filly went on to win more than $300,000 and the Seeking the Ante Stakes at Saratoga Race Course.

In 2005, the focus on Thoroughbred aftercare was not what it is today. But when Clear Stars’ That’srightofficer was done racing in 2009, the relationships in the business that Sternklar had chosen and cultivated accelerated his commitment to horses when they are done racing.

Purchased from the consignment of Niall Brennan, agent, for $60,000 as a two-year-old, That’srightofficer is a graded stakes placed New York-bred by Officer that earned $230,000 and retired in 2009.

“Niall and his wife Stephanie have a program in which they’ll take back horses they sell and find them good second homes,” he said. “I thought that was the coolest thing. He became a jumper and I think he earned some awards.”

In 2006, Sternklar and Schosberg claimed a three-year-old out of Maria’s Mon (a horse Schosberg had trained) at Aqueduct Race Track. In his eighth start for his new connections, a second-place finish at Saratoga in 2007, Bold Mon sustained a career-ending injury. He became part of the Thoroughbred Retirement Foundation program at Wallkill Correctional Facility, a state-accredited vocational program in horse care and management for the inmates.

“He was there for about 11 years,” said Sternklar, “and I saw him two years ago, when he was in Saratoga as part of a TRF showcase. He had spent over a decade helping people who need help.”

Sternklar aims to retire horses while they are still sound enough to be retrained for another career, and he wants to be a vocal advocate for retirement programs.

“There’s no better way for me to spend my money,” he said of his donation. “I care a lot about the animals, and the least I can do is help them the way they’ve helped me. I’ve talked about it in interviews and other opportunities. I think it’s good for people to hear that owners are supporting these programs.”

Join the Cause: With the generous help of donors Len Green and the Green Group, Patricia Hurter, Kyle Emmich, NYTB/NYSTBDF, and Michael Sternklar, TAKE2’s “Perfect 10” campaign has already raised $48,739, ahead of our goal of raising $10,000 a month for 10 months in celebration of our 10th Anniversary. We encourage members of the Thoroughbred Horse Racing, Show Horse and Sport Horse communities to follow our supporters’ lead and honor the anniversary with donations of any size.

Post on Social Media: Throughout the campaign, TAKE2 will feature donors and surprise celebrity ambassadors on our social media platforms.  All owners of retired racehorses turned hunter/jumpers are also invited to share photos of their horses on TAKE2’s FaceBook, Twitter and Instagram accounts with the hashtag #TAKE2Happy10th.

To Make a Donation: Click here to make a donation today!  You can also donate by texting HAPPY10TH! to 44321.

Equisite at the Hampton Classic

When Perfectionism Holds You Back