Home Blogs Ask Patricia & Dottie: How Do You Prepare for Pony Finals? 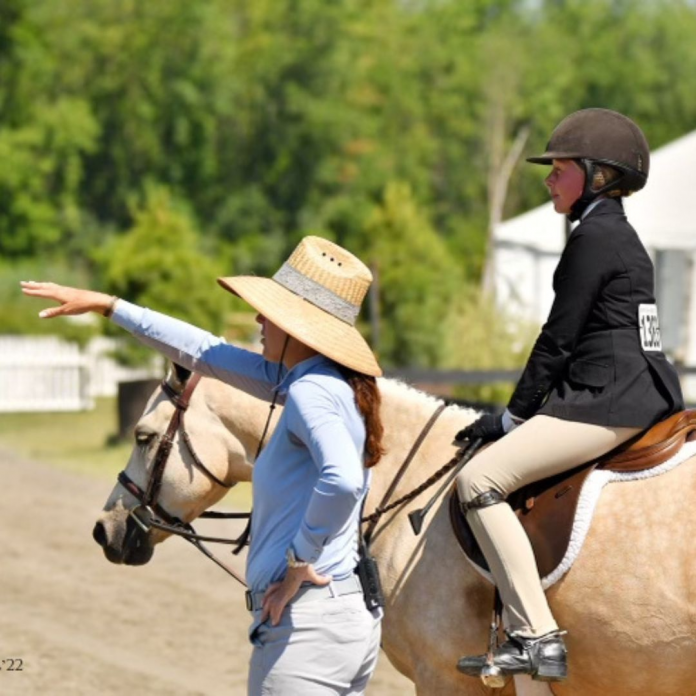 Professionals Patricia Griffith and Dottie Barnwell Areson have worked at Heritage Farm for a combined 35 years. Ahead of the 2022 USEF Pony Finals, they share some insight into how they prepare their riders for the one-of-a-kind championship in Lexington, KY.

Have a Dress Rehearsal

Every year ahead of Pony Finals, Griffith and Barnwell Areson utilize the facilities at Heritage Farm in Katonah, NY to create a Pony Finals dress rehearsal, putting up posters and flyers in Heritage’s main arena, setting a course with long, bending lines, and asking their riders to practice putting forth their best round, with one attempt.

“The equipment in the lower ring at Heritage is smaller, so that’s where the ponies ride a majority of the time,” Griffith said. “Before Pony Finals, we take over the top ring and make the jumps more user-friendly for the ponies. We take the liverpools out, remove the walls that are 3′ and larger, and simulate more of a long, bending line-type of course. Our two rings are right next to each other, so we use the lower ring as a mock schooling area, have our riders walk up the little ramp, walk into the ring, and go. After their round, I like to have them tell me what they think their score would be and why. It educates them. When you get to a show like Pony Finals where they announce scores, it can be shocking. These riders need to learn and understand why they got that score. It’s not necessarily that they rode poorly; it’s that there’s a certain score for a missed lead change or a trot step, and unfortunately that’s going to be in the 50-70 range.”

“In most of their lessons, these kids have the opportunity to ride the course multiple times and feel like they got it right,” Barnwell Areson said, “and at most horse shows, there is more than one jumping class. Pony Finals is unique in that there is one opportunity [over fences]. It’s really important to practice having the feeling of pressure. You have one shot, and you haven’t ridden the lines before. Kentucky has been such a great venue, because they have so many rings. Every day, there’s a full course of show jumps set for small, medium and large ponies. You have the opportunity to do ticketed schooling and warm-up over a show course, but it’s obviously not the same as the main arena.”

“You have to realize that the model starts way before the show—in the care of the ponies, making sure their tack fits perfectly, that their weight is good,” Griffith said. “You can’t get to the week before and think that a few extra baths and a brush will do it! You have to work on it all year round. These riders haven’t gotten to practice modeling or jogging (Many horse shows eliminated the model and jog from their schedules following the onset of the global pandemic). If your pony stands well but doesn’t trot, you’re not going to get a good score. You have to practice that, and you can’t leave it until the last second.”

“The depth of Heritage really helps,” Barnwell Areson said. “We have Caroline Passarelli (2016 USEF Pony Medal Final Champion) and Molly Sullivan, another past Pony Finals Champion, training here. Junior rider Erin Morera was Reserve Grand last year (with Nominee). They still feel passionate about it, and they help the other kids. They take the time to help explain the tips and tricks they’ve learned. We have the good fortune of having other kids step in and help their younger peers. It happens naturally here, because we have such a range of experiences, and we have that depth.”

Prepare for the Unexpected

“You need to be super organized at Pony Finals,” Griffith said. “On the surface, it might seem like you don’t need much staff there, because it’s a one-ring horse show. But the ring is far from the schooling area. You can’t miss your group. You don’t want to be late, but you don’t want to stand in the heat for hours. You need a good system, especially if you want to get in a warm-up round on your way up. It’s a balancing act.”

“At Pony Finals, you have to halt in the flat. A lot of barns that don’t have an emphasis on flatwork might not be used to practicing this,” Barnwell Areson said. “We practice this extensively in our flat lessons at Heritage and make sure our kids are comfortable with the halt. You have to be mindful of it. Some ponies might need a different bit for the under saddle. You have to prepare for what might be unexpected.”

“There can be a lot of stage fright on both the riders’ and ponies’ parts at Pony Finals,” Griffith said. “At a normal show, you get to ride in the morning. You get to acclimate the ponies, especially the green ponies. At Pony Finals, there’s not even a hand-walk scenario. We prepare our riders for that by practicing that at home. Typically before Pony Finals, we take the ponies to Brandywine, where our riders can practice riding a big class in the Dixon Oval. This year, we didn’t have that (Brandywine was cancelled), so we’re doing our best to recreate that at home.

“Only the rider competing may ride the pony for the entire week that you are there,” she added. “Pony riders have to know what their pony feels like when he’s ready to show, when he’s still fresh, and when he’s too tired,” Griffith said. “You need to know your pony and have a feel for what your pony is telling you on show day. We make sure our riders pitch in on the preparation of their ponies throughout the year.”

Make the Most of the Opportunity

“The USEF Pony Medal Final is back in the Alltech Arena. In a few years, many of these kids will ride the Maclay Finals there,” Barnwell Areson said. “You get to have the experience of riding in an equitation championship and having that one shot—hopefully, you make the second round, but to get there, you have to be able to walk in the ring and put the round in. The course designers make the course really fair for all the different pony heights, but it’s such a unique experience for these kids.”

“It’s their Olympics,” Griffith said. “It’s their moment on the main stage of a venue. Every bit feels important.”

American Bred: Dream Big, a Pony That Lives Up to His Name

Publisher’s Note: Is it a Measure Or Is it a Target?