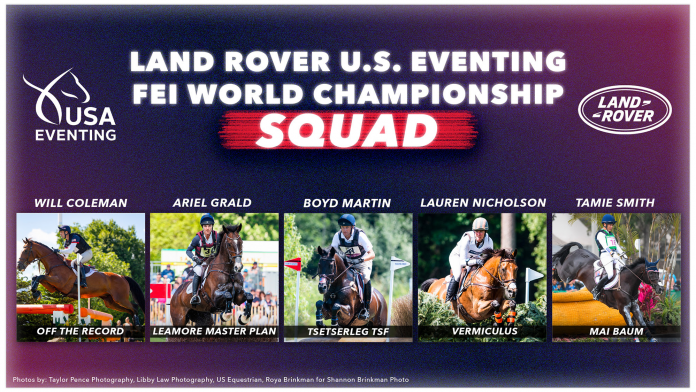 Lexington, Ky. – US Equestrian is pleased to announce the combinations selected to represent the Land Rover U.S. Eventing Team at the 2022 FEI Eventing World Championship, scheduled for September 14-18, 2022, in Pratoni del Vivaro, Italy. The team will be led by Chef d’Equipe Bobby Costello.

The following athlete-and-horse combinations have been selected for the Land Rover U.S. Eventing Squad at the 2022 FEI Eventing World Championship and are listed in alphabetical order:

The following combinations have been selected as alternates and are listed in alphabetical order.

Competition will begin with the first horse inspection on Wednesday, September 14, and will conclude with team and individual medals being awarded after the conclusion of the jumping phase on Sunday, September 18.

For more information, including schedule and results, visit pratoni2022.it/en/.