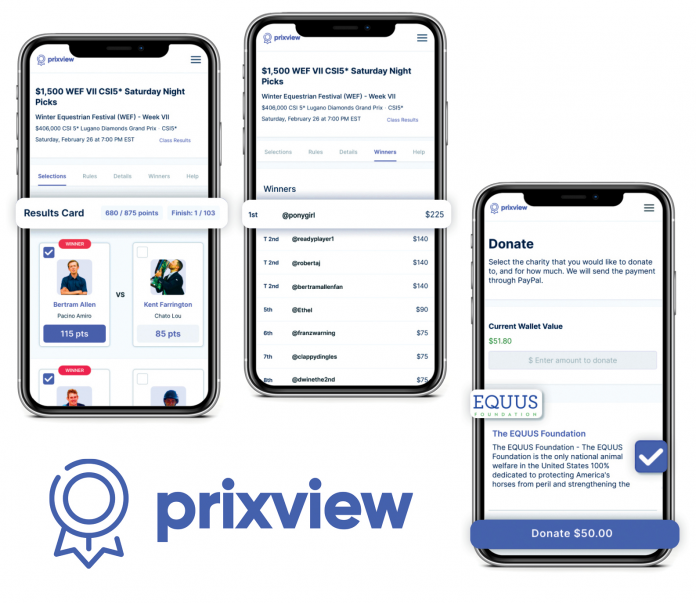 Lucy Davis has developed quite the list of accomplishments—from her Olympic silver medal to her bronze medal at the FEI World Equestrian Games, she continues to find success at the highest level of the sport. However, Davis’ latest accomplishment, while it may still involve horses, is something the sport has never seen before.

Prixview, founded by CEO Lucy Davis and Rob Gierkink, brings fantasy sports games to the equestrian industry, offering cash prizes as the leading sports data provider in the sport. It’s free to play, and users are able to not only participate in fantasy play, but also analyze competitions in a new, revolutionary way tracking jump types, faults, point of contact, terrain, and more.

Davis’ inspiration comes from not only her career, but her childhood experiences as well. Growing up in a family that was involved in the horse racing industry, she was exposed to the wagering aspect of horse racing. As a rider, she noticed the difference in the spectator aspect of the sport in Europe compared to the US, where large crowds gather to watch the top classes.

“At the Rio Olympics, I was quoted as the wrong age two days in a row, with the wrong trainer. Other than that, they just talked about how nice my horse was, and that we were a good partnership. But they didn’t say, ‘Lucy has had this percentage clear round rate over the past five years with this horse. Even though she’s the youngest on the team, she’s had six double clear Nation’s Cup performances. When she does have a rail it’s usually a vertical, and vertical into a combination.’”

It became clear to Davis that the sport was missing clear-cut data. Not only is Prixview looking to entertain and engage fans, the platform also aims to help these top athletes and coaches.

“Data is, in other sports, how they find their players. They use the data to place them in the best possible position to thrive. I hope athletes can use it as a resource to help elevate their performance,” she says. “It gets you thinking and hopefully helps you and your trainers figure out how you can improve.”

Prixview’s mission is to offer high-quality data in order to provide more context— to grow the fan base and create new monetization opportunities within the sport.

“Sports like golf are also all-day long with multiple athletes around the same course.  They all have different strategies, and it becomes super interesting to see the technicality,” she says. “What we’re building is a huge performance data archive. One of the reasons that this data is powerful is that it creates the possibility to serve audiences with insights that help them understand what’s going on…Gaming is the gateway to getting audiences interested in the competition, and then we can serve them with more and more educational content, statistics, and figures to grow their fandom.”

In April 2021, the idea of Prixview was born. Davis and Gierkink realized that gaming and sports betting was a way to engage fans through entertainment, while also providing an educational aspect as well.

“You have enough on the line, even in a free-to-play context, to learn more about the riders, the horses, and the format of the classes,” says Davis.

What presented itself as a challenge in terms of sports betting was the lack of data in the sport. Before any sort of fantasy platform could be established, first a live data collection infrastructure needed to be built. Davis and her team spent nine months developing a customized software for data collection.

“We’re trying to layer in a new level of detail,” she says. “We collect basic information, we code in all the jumps, then we actually collect in real time during the event, which faults each horse and rider combination has, from which lead, which point of contact, so the front legs or hind legs.”

The software then takes the data and processes it into real-time analytics for each horse and rider combination for the given class.

“These fantasy games we are providing are based off of this point system,” says Davis. “We’ll take a rider head-to-head, and we’ll take all of the variables that make the sport technical. [We’ll] find what their probability is of going clear and depending on what that is, we’ll set a point spread accordingly. The larger the point spread is indicative of the likeliness of one person to win over the other.”

In addition to the head-to-head format, Prixview offers another format that is over/under based on faults.

“We do the same with what we predict a combination will have given these variables, then we round up or down to .5 and set a spread according to that,” she says.

The only requirement to participate in a Prixview game is to be 18 or older to enter. The games are free to play, and offer cash prizes to either cash out or donate to charities.

“We’re running fantasy games fueled by detailed, live data in hopes that we can both better engage fans that already like horses and want to learn more and attract new eyeballs to the sport. We’re already finding that people, even existing fans and riders, are tuning into more classes than before and that makes our team so excited for the future.”

*This story was originally published in the August 2022 issue of The Plaid Horse. Click here to read it now and subscribe for issues delivered straight to your door!

The Ringmaster: The Quarterback of the Horse Show