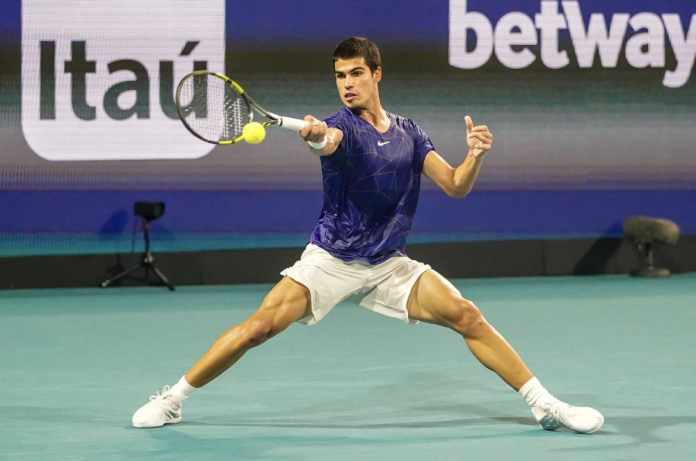 The hype surrounding 19-year-old Carlos Alcaraz reminds fans of another young Spaniard who burst onto the international tennis scene in their teenage years. That was Rafael Nadal, who since then has established himself as arguably the greatest men’s tennis player in the history of the sport.

While expecting Alcaraz to follow in the footsteps of his fellow countryman is an enormous burden to heap on the shoulders of someone so young, his form in 2022 would suggest that he has the potential to be a generational talent. He had the opportunity to further fulfil that potential and cap off an extremely successful calendar year last weekend, when he took on Casper Ruud in the US Open final.

His path to that point hadn’t been an easy one, as his three matches preceding Sunday’s blockbuster were all five set thrillers. As a result, many were concerned that he would be entering the decider with little left in the tank.

However, in spite of his arduous run to the final, Alcaraz was still the betting favourite to take out the Flushing Meadows title. First though, getting past Ruud was far from a forgone conclusion, as the Norwegian’s route to the big dance was less difficult when compared to Alcarez – having defeated his three previous challengers in four sets or fewer.

In addition to both players’ incredibly entertaining play, there was an air of excitement surrounding the clash as it marked the first time in the Open era that two players had gone head-to-head with both a maiden grand slam title and world number one ranking up for grabs.

As play began, Alcarez’s made his intentions known early – dazzling the crowd with his exceptionally creative stroke-play and athleticism. The Spaniard won the opening set 6-4, and with roughly 80% of tennis matches going in favour of those who win the first set, Ruud needed to hit back with authority if he had any chance of challenging.

He did just that, dominating the second set 6-2 with high percentage plays and mistake-free tennis. Alcarez’s audacious and innovative stroke-play began to work against him – and in what seemed to have happened in the blink of an eye – Rudd had snatched the momentum from his opponent.

Locked up at one set apiece, fans and pundits watched on with great interest to see how Alcaraz would handle the pressure at such a young age. He showed he possesses the mental fortitude and intangibles that you would expect of a player many years his senior. On serve and down 5-6 in the third, Alcaraz saved a set point to win the game and send it to a tiebreaker.

The Spaniard went on to comfortably take the tiebreaker 7-1 – proving a crucial blow to Ruud’s chances and confidence heading into the fourth. Knowing he had the upper hand on the score board, Alcaraz put the foot on the gas and played with a level of freedom and assertiveness that had the Arthur Ashe crowd watching on in awe.

He took the fourth set 6-3 – and in doing so – became the second youngest male to win the US Open, and the youngest player in ATP (Association of Tennis Professionals) history to be ranked number one in the world.For those who have access to free sports betting tips, Alcaraz has opened as the second favourite to win the Australian Open in January, with odds of 7/2.