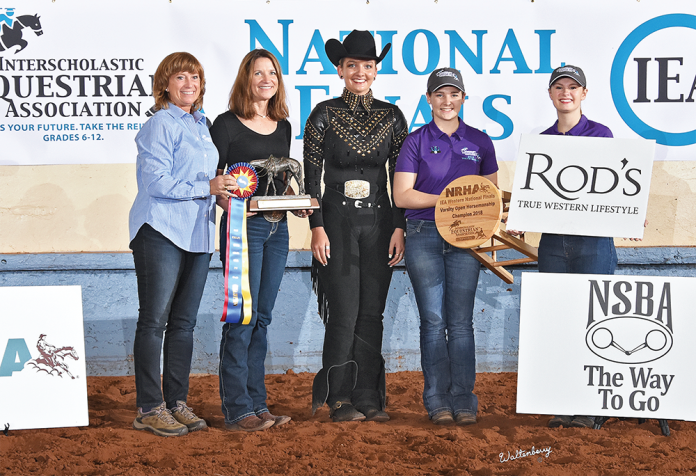 The Interscholastic Equestrian Association (IEA) has announced a renewed two-year agreement with the National Snaffle Bit Association (NSBA). With this alliance, the NSBA will be named the title sponsor for all horsemanship competition at the 2023 IEA Western National Finals, providing bronze trophies for all classes. NSBA also was the horsemanship competition title sponsor of the 2022 IEA Western National Finals held last April in Harrisburg, Pennsylvania during the IEA 20th Anniversary.

“We are thrilled to continue our partnership with NSBA,” stated Roxane Durant, Co-Founder and Executive Director of the IEA. “NSBA and specifically NSBA Executive Director, Stephanie Lynn, have been important partners of the IEA. Not only are they bringing significant sponsorship to our Western National Finals, but Stephanie has provided invaluable support to our Western program through her involvement on our Western Committee. Both IEA and NSBA are committed to promoting equestrian involvement and industry growth, so this alliance is inherently a win-win for both organizations and for the equine industry in general.”

“NSBA is pleased to be Member Partners of the IEA. Together, we can promote youth equestrianism by providing competition for young riders who may not otherwise have a platform to show horses,” stated NSBA Executive Director, Stephanie Lynn. “And for those IEA riders who do own their own horses, it was exciting to see IEA participate as an exhibition team this year in the NSBA sponsored National Youth Activities Team Tournament (NYATT) at the 2022 All American Quarter Horse Congress.”

The 2023 IEA Western National Finals will be held June 23-25, 2023 at the Will Rogers Memorial Coliseum Complex during the American Paint Horse Association (APHA) World Show in Fort Worth, TX.