Home Blogs Outside the Ring The Mule: Everything You Should Know About the Most Underrated Equines 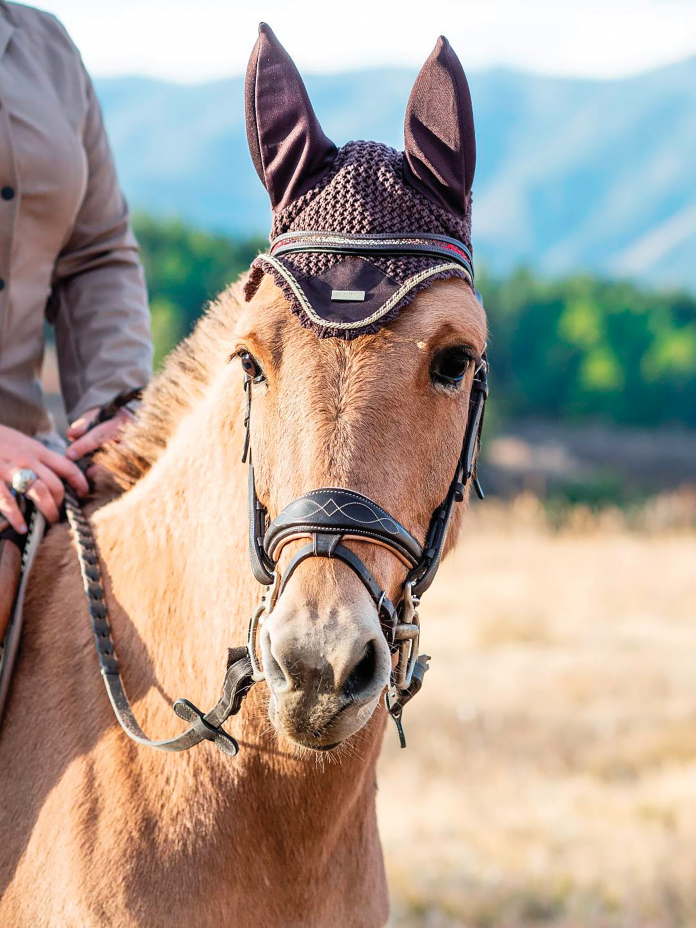 This is the latest story in Margie Sloan’s  “So! Who’s Your Daddy” series about some incredible stallions and their babies.

Molly was a sight to see: well groomed, athletic, and proud of the blue ribbon fastened to her bridle. The horse who came in next asked, “So! Who’s Your Daddy?”

The horse was flabbergasted.

“Yes, my Daddy is known as equus asinus. As his daughter, I’m a Molly Mule.

Molly elaborated that her parents, a donkey and a mare, gave her the best of each of them, and she could jump fences, execute dressage moves, win endurance races, help the farmers, and help soldiers in battle.

For all the Mollies and Johns out there, some good news: Since December 1, 2021, mules are allowed to compete in USHJA horse shows. For mule fans, the recognition is something to bray about as donkeys and their mule progeny have a place in our history and in our hearts.

The little long eared ones have been around for six thousand years. Donkey brethren were the beasts of burden throughout ancient world. It was the donkey Nester who carried Mary to Bethlehem and the donkey Dapple who carried Sancho Panza on his quest in Cervantes’ Don Quixote. Then, donkeys came to America in the 15th century.

Christopher Columbus brought four jack donkeys and two jenny donkeys to the New World on his second voyage in 1495. George Washington received a jack donkey from Spain and named him “Royal Gift.” The first president of the United States bred his donkey to selected mares to produce mules that could improve agriculture and assist the Army.

Fast forward a few centuries and we have Royal Gift’s descendant, Little Jack Horner. The late sire supreme of Lucky Three Ranch is owned by renowned donkey and mule trainer Meredith Hodges in Loveland, Colorado. In his day, Little Jack Horner reached second level dressage and jumped four feet in exhibition at Bishop Mule Days in 1991. Despite his achievements, he was not allowed to compete in sanctioned horse shows.

It was Meredith Hodges whom Katie Wetteland contacted in 2019 when she began her two-year campaign to allow mules to compete in hunter and jumper classes at USHJA shows.

Katie’s mule, Mjolnir The Long Ear is named after Thor’s hammer in Norse mythology. The result of a randy donkey visiting a racing quarter horse, Mjolnir didn’t have much of a life before Katie became his human partner. He was the scandalous embarrassment of his owner, languishing in a concrete stall with only one turn out a week. It all changed when Katie played tag with him in a round pen. The connection was there. Katie saw not just a mule, but an equine fluke with a fabulous future.

Mjolnir quickly advanced from lunge line jumping to oxers. Being excluded from jumper divisions in recognized horse shows was unacceptable to Katie and Mjolnir. They had something to prove and hoped to demonstrate to naysayers that mules have the sturdy legs and the power to jump high and land firmly on their big feet. Dressage, endurance and driving mules were accepted by USEF, but not jumpers.

Katie started a petition that found its way to Whitney Barnard at USHJA, who competes with a mule. Whitney steered Katie to the USHJA Jumper Working Group, and USHJA President Mary B. Knowlton, who submitted Katie’s request for the rule change.

Katie hopes to see more and more mules in jumping competition here in the USA and internationally.

“After all the mule has humbly given to America, I am honored to be a part of America giving the mule the recognition it deserves. To underestimate the value of donkeys and their mules is a disgrace to their species.”

When she looks at Mjolnir and the mules she breeds for showing, she sees the big personality, the big heart, and the even bigger talent for equestrian achievement. Katie uses reasoning to convince Mjolnir to perform as he has the mule trait of asking why.

“Once he agrees that it’s a good idea to jump the oxer, he goes for it with gusto!”

How could any donkey daddy not boast of his progeny as mascots of the US Military Academy at West Point? The tradition that started in 1899 continues today. Former Ambassador to Portugal, Al Hoffman, Jr was a cadet mule rider in 1954.

“None of the cadets were eager to volunteer to ride a mule in a football stadium with canons going off and enthusiastic fans. But I did! I rode a huge mule named Hannibal. I loved him! I jumped on him from the rear and he took off like a shot. He didn’t like going into the big stadium until a donkey named Skippy accompanied him. Skippy was a gift to the USMA from the Ambassador of Ecuador. What a pair they were.”

Steve Townes, the CEO of Ranger Aerospace, fell in love with mules when he was a cadet at West Point in 1974. He has pledged his donation of mules to West Point in perpetuity.

“I consider it a privilege to provide the mules. While at West Point, I rode a mule named Buckshot. Then I graduated and became an Army Ranger and went to fight in Vietnam.  My only ask of the USMA is that they always have one of the mules named Ranger.”

Palladin and Ranger IV will be exciting the crowd at the next Army Navy NCAA football game in December in Philadelphia. Previous Army mascot mules Ranger III and his half-brother Stryker are happily retired and living their best life with US Army Forces Command Veterinarian Anne Hessinger.

To date, five million donkeys have been slaughtered for their hides used in the making of ejiao, the traditional Chinese medicine and beauty product that has no scientific data to back up claims. The Donkey Sanctuary UK estimates that donkeys will be decimated in the coming years due to the increasing demand for ejiao.

Impoverished people in developing countries depend on their donkeys and mules for farming and for transportation. It is not only the donkey population that is at risk, but the people who need them for their survival. The USA is the third largest importer of ejiao. EBay discontinued selling ejiao, but Amazon continues despite, the thousands of petition signers and the ongoing efforts of humane groups. The sad truth for the equine world is that without donkeys, mules will disappear.

Dr. Amy McLean, Ph.D., Assistant Professor of Teaching at the University of California Davis, takes a pragmatic approach to preserving the world’s donkeys. She researches all aspects of donkey and mule behavior and pain management. She also owns and competes with a mule.

“I grew up showing mules in jumping and did a bit of western riding with them. They are unique in the equine world. My 16.3 Greystone’s Silhouette, a.k.a. Big Star Sarge, is a jack out of an Andalusian donkey at the University of Illinois. I’ve been competing with him for two years in jumping, cutting, and driving.”

For Amy and the many mule competitors, the reality of the ejioa trade is a loud wake-up call. Knowing that ejiao will continue to be manufactured in China, despite efforts to ban ejiao in several other countries, Amy taught the proper care of donkeys at the largest ejoia farm in China.

“The black market for donkeys is awful. I know I can’t stop it, but I have seen success in China where my proposals for care were adopted. I don’t see other cultures completely doing away with donkeys for a food source and for ejiao. I love them and hope to improve their living conditions and to teach handlers humane means of transport and about the deep feeling that donkeys have.”

The power of a donkey to reach the human psyche is something Ron King knows all about. Ron left his career as a media executive for Time Inc., and now is the CEO and co-founder of Oscar’s Place in Hopland, CA, where donkeys find refuge, veterinary care and love.

“The emotional and memory capacity of donkeys sets them apart from all other animals. We’ve rescued about a hundred donkeys so far. Nothing in my glamorous career in media could compare with the work I’m doing now. It’s a 24/7 job and I am thanked daily by the donkeys that fully comprehend that they have been saved. We promise them a healthy and peaceful life.”

Oscar’s Place has just opened a surrender village where owners who can no longer care for their donkeys can drop them off instead of taking them to auctions.

US Congressman Roger Williams from the 25th District in Texas, and his wife Patty, have been rescuing donkeys for several years at their ranch near Ft. Worth.

“They come to us from the weather disasters and from folks who just can’t keep them. We love them. They are God’s creatures and we consider them part of our family.”

Arnold Schwarzenegger, Reese Witherspoon, Martha Stewart, Amanda Seyfried, Jeffrey Dean Morgan, and Hilarie Burton all own donkeys. Children worldwide will no doubt continue their love of Eeyore from Winnie the Pooh and Donkey from Shrek.

As daddies go in the equine world, donkeys have contributed their heart and soul to their mule babies, and to the millions of humans who revere them.

*This story was originally published in the October/November 2022 issue of The Plaid Horse. Click here to read it now and subscribe for issues delivered straight to your door!