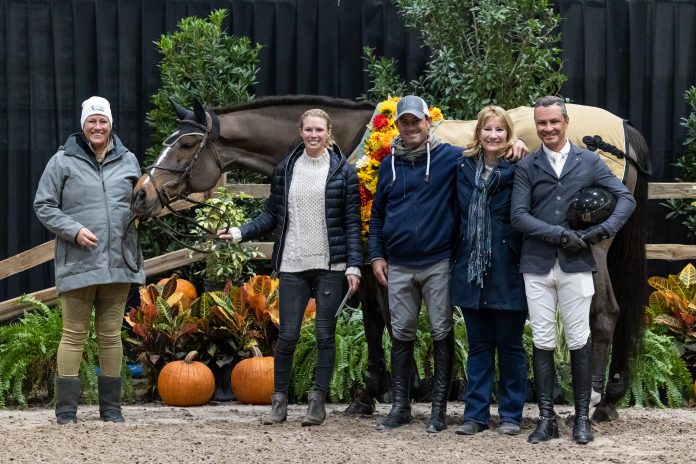 The 18-year-old Zangersheide mare Quilona V Z, owned by Carolyn Elsey since 2008, was retired in a special ceremony held on Saturday, November 12, at the Great Southwest Equestrian Center in Katy, TX.

After being born in the Netherlands, Quilona was started in California by Nicole Saathoff – before the mare was purchased off the internet by Elsey.

While some might have questioned Elsey’s sight-unseen decision at the time, it proved wise.

Trapp O’Neal of TKO Sporthorses took the irons on Quilona, taking her from the 1.20m to the grand prix ring and winning numerous welcome stake and grand prix classes along the way. They forged a great partnership, and O’Neal even made several trips to Texas A&M to visit and hang out with Quilona after she had a tumor removed from her sinus and was in the hospital for two months.

Quilona next stepped onto the world stage of Bolivia’s Daniel Bedoya, who made his FEI debut with the mare in 2017. That same year, Bedoya and Quilona V Z had the honor of representing Bolivia at the Bolivarian Games in Colombia.

“Being part of a national team was an amazing experience and was a once-in-a-lifetime honor,” said Elsey, of Cypress, TX. “I think Quilano actually enjoys Daniel playing with her and giving her helicopter ears!”

Quilano will now retire to a lush green pasture at home in Texas, as he passes the baton to her two-year-old son, Carter.

Can We Improve Horse Shows in a Post-Pandemic Circuit?