Home Blogs Outside the Ring Filming Horses for TV and Movies 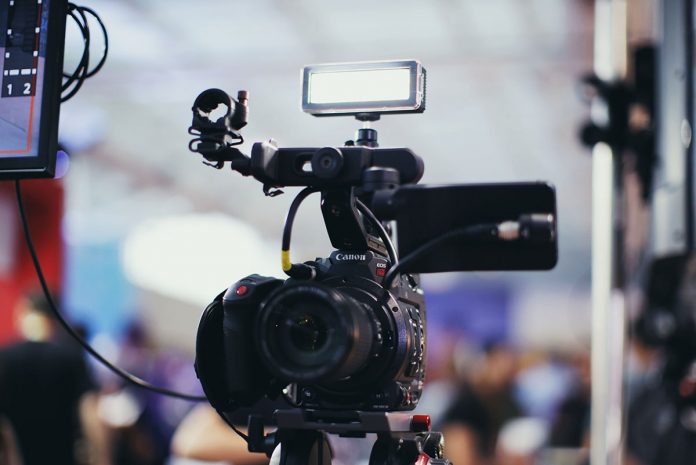 If you are doing a TV show, or film with or about horses, it’s helpful to have a cameraman who knows how to get the best angles. Many filmmakers don’t know how to shoot a horse scene to keep your viewer feeling the excitement, as if they are watching the action or riding the horse.

I introduce you to Lou Vaccarelli, a cameraman with these skills. He is an equestrian and cameraman for TV and Films.

The Donna Drake Show: Live it Up! is a weekly, one-hour television and digital series featuring interviews with celebrity entertainers, sports legends, top journalists, business moguls, authors, motivational speakers, medical professionals, health and wellness experts, beauty and fashion icons, chefs, non-profit groups and everyday heroes sharing their stories of triumph, inspiration and perseverance. It airs across the US and in 25 countries. Lou Vaccarelli is one of several cameramen that are a part of Drake Media Studios.

Donna Drake and Lou Vaccarelli have been collaborators for over 20 years. Recently, they visited Suffolk Stables with owner Deborah Lyons Greer and her friend Pearl Running Deer to film a segment for The Donna Drake Show.

Let’s talk about your work at the Donna Drake show.

Right now I work in Television for the Donna Drake Show, Drake Media Studios, and shoot many of her remotes. Thus far, not too many horses are involved. I consider myself more of a Photo Journalist. That is to say, I shoot on the go with no setup. It’s more random. When Donna is on location, I have to be prepared for any development. Bad lighting, crowds, sound interference, and distance between me and the subject.

You’ve been riding since the 1970’s. What equestrian division did you ride in?

I didn’t really ride in a division. Purchased my first horse, Serendipity, a gelding appendix horse, (quarter horse and thoroughbred mix) in 1975. Boarded him at Jamaica Bay riding academy in Brooklyn. Showed Stadium Jumping and Dressage. Moved him to Long Islands Stony Hill Riding Academy in 1977 where I took up Cross Country Jumping as well. As an aside, I drove a team of horses during the Bi-Centennial wagon train from Brooklyn to Valley Forge in 1976. I started later in life at 28. An old man compared to the much younger riders.

Why is it best to have a cameraman that knows the angle of how to shoot horses?

It’s best in order to not have to repeat the shot. Horses get tired. They can’t run all day. Even the pony express used many horses for one route. When I drove a team of 2 horses to Valley Forge PA from Brooklyn, over 115 miles. We had 2 teams’ covered wagons and 4 outriders. Took us a week and camped out. I assigned one outrider to be responsible for the horses. He happened to be the barn manager. He had the responsibility for the horses’ welfare. So many hours a day, frequent stops, plenty of water at a certain speed.

The worst shot for all us riders is when they shoot under the horse while jumping or coming at you with hooves! What do you think is the best angle to show the action?

I find the best shot is from the front quarter. Action movies with horses always seem to revolve around the horse falling or being shot at or chased. I’m not happy with that. On the other hand action movies about horses with positive outcomes I like. We need more of how horses help stabilize persons with mental health issues.

Were you ever a stunt rider in a film or TV show?

I auditioned for an AMEX commercial where I had to take a horse through Central Park, and jump a few park benches, which was the easy part, remembering the one line was more difficult. I didn’t get the part.

As a cameraman, do you see a horse show from a whole different outlook?

I think I have a better appreciation of filming and still action shots of horses. I was a cameraman before horses. I had no idea what went into the ride and the skill and athleticism needed to train and ride.

Pearl Running Deer was the first Native American who rode on the circuit in the 80’s-2002. Her trainer was Maurice Honig from the French Equestrian team. She would follow Frank Chapot or Bert De Nemethy teachings. In the 2003-13 she was a high fashion model at the Mercedes Benz Fashion Week in NYC. At the same time, she was working with film directors, as  ”Girl Friday” and continues with the film industry today. Ms. Running Deer teaches riding, coaching at horse shows and gives clinics.