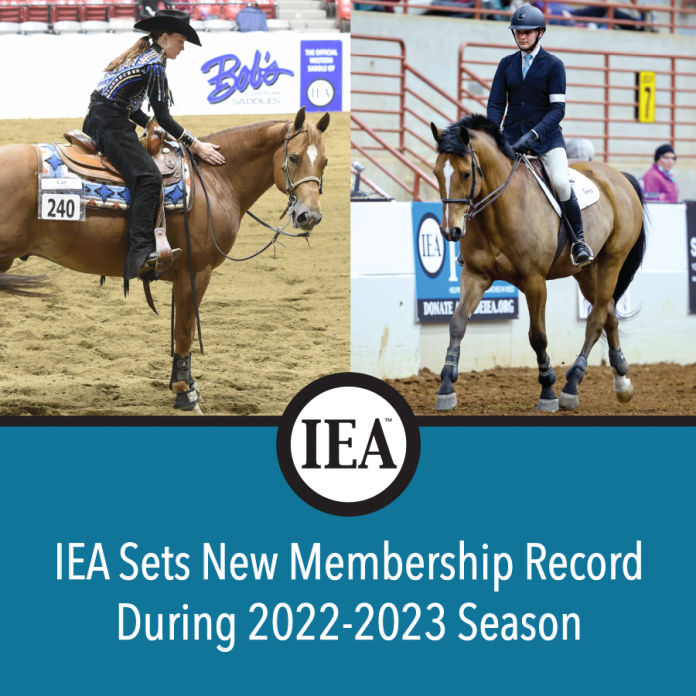 Now well into the 21st season, the Interscholastic Equestrian Association (IEA) has once again set new membership records for the 19th time in the organization’s history.

Following the success of their 20th Anniversary season which broke a major membership milestone, IEA continues to expand programs to attract new members – this season adding an adult pilot program. This small, burgeoning adult program was introduced at the start of the 2022-2023 season and has seen approximately 100 amateur riders participate so far. To date, IEA has now topped 14,550 active members this season – besting last year’s record of 14,201.

“It has been rewarding to see growth in almost all the areas of membership this year – not just the new adult pilot program,” says IEA Director of Marketing & Communications, Kimber Whanger. “Youth rider numbers have increased and we welcomed more than 130 new teams – including a first-time team from Canada. Rewarding in that we were unsure if we were going to maintain the same level of enthusiasm and growth following last year’s massive anniversary season.”

“Our goal was never to become the largest ‘anything’, said Roxane Durant, IEA Co-Founder and Executive Director. “We have, however, stayed true to our core of introducing as many youngsters as we can to equestrian sport at a more affordable cost than traditional horse ownership and showing. The success is a testament to delivering this type of competition to a previously underserved marketplace demand. As we move into our third decade of operation, we are now expanding our reach to adults who may have gone through an IEA/IHSA/NCEA program and are now looking to get back into regular riding and competing. It has been really fun to see parents participate in their own classes alongside their children.”

IEA offers affordable riding opportunities for student athletes in grades 4-12 and adult amateurs 21 and older using a draw-based competition format whereby riders do not need to own their own horse or tack. IEA show hosts provide horses for every level of competition from Beginner walk-trot through Varsity Open. Youth riders compete on teams and as individuals, accruing points throughout the season to qualify for regional, zone and national competitions.

IEA will host a combined Hunt Seat and Dressage National Finals on April 26-30, 2023 at Tryon International Equestrian Center in Tryon, North Carolina. IEA Western National Finals will be held on June 23-25, 2023 at the Will Rogers Show Complex in Fort Worth, Texas in conjunction with the American Paint Horse Association (APHA) World Show.

IEA Membership is open year-round for riders, coaches, teams and show officials with most regular season shows happening between August and January.

﻿Registration for the 2023-2024 season will officially open in June 2023. The best time to join is between June and August so that riders and teams are ready to show beginning August 1st.

Groom Your Favorite Breyer Horses for the Dressage at Devon Virtual...