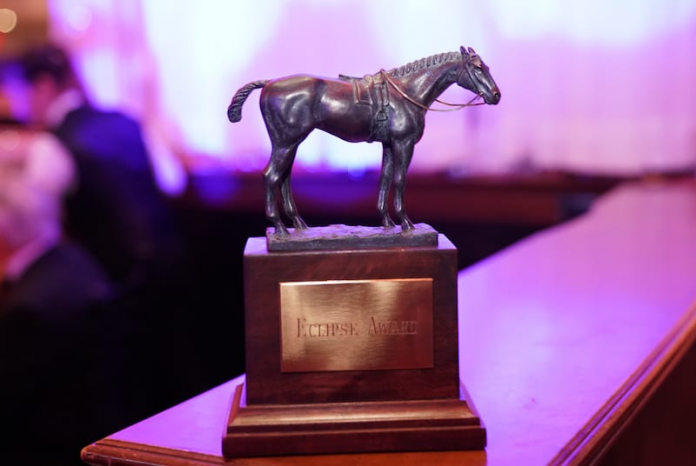 Tom Law, a senior writer for Mid-Atlantic Thoroughbred, will receive an Eclipse Award for his coverage of the 2022 Preakness Stakes in the magazine’s July edition. Law’s story about Early Voting’s win in the second jewel of the Triple Crown was recognized in the News/Enterprise category of the annual media Eclipse Awards contest overseen by the National Thoroughbred Racing Association, Daily Racing Form and National Turf Writers and Broadcasters. It was the second consecutive Eclipse for the magazine, following a feature by Sandra McKee in 2021.

Law wrote “Big Tally: Early Voting gives Klarman, Brown second victory in Preakness Stakes” for the July 2022 edition of the monthly magazine published by the Maryland Horse Breeders Association. The article anchored the magazine’s Preakness coverage and focused on the decision by owner Seth Klarman and trainer Chad Brown to keep their horse in New York – rather than ship to Florida with the rest of the string – late in 2021 and through the winter of 2022.

Chad Brown knew exactly what to do with Early Voting last fall, first at Saratoga Race Course with just about all the leaves on the ground and later at Belmont Park with long shadows and chilly afternoons.

Unlike some of his more heralded stablemates – Jack Christopher, Zandon, Gerrymander, Portfolio Company and Consumer Spending for starters – Early Voting had yet to make a start despite making an impression. Brown described the son of leading freshman sire Gun Runner as “big, handsome, burly,” and “like a bar fighter,” but didn’t want to take the late developing colt out of his routine. So, when it came time to shuffle his sizable stable’s deck – with the perceived “A String” going south to Florida and Payson Park Training Center – Brown opted to keep Early Voting in New York for the winter.The move paid off with a debut win in December, the Withers Stakes in early February and, ultimately, a classic victory.

It was the second Preakness win in six years for Klarman, who grew up a few blocks from Pimlico Race Course, and Brown as they teamed up to capture the 2017 race with Cloud Computing. In the final paragraph of the Eclipse-winning article, Klarman called the Preakness a memorable moment.

“You know, I’ve lived my adult life in Boston, but it’s an incredible experience to come back to my hometown and have a chance to compete at this level,” he said afterward. “It’s one of the highlights of a career owning racehorses. A really extraordinary feeling.”

You can read the full story here.

A native of Saratoga Springs, N.Y., Law grew up attending the races at Saratoga Race Course and started his career in journalism on the staff at The Saratogian in 1994. Law covered racing and other sports for the daily newspaper, and later moved to Kentucky for a job with Thoroughbred Times magazine in 1998. When that publication ceased operations in 2012, Law joined the team at ST Publishing – the parent company of The Saratoga Special newspaper and other projects including the editing of Mid-Atlantic Thoroughbred.

“Winning a second Eclipse Award is an incredible honor, and especially satisfying to be recognized for the coverage of a historic event like the Preakness,” Law said. “One of the many things I’ve learned working with colleagues, friends and partners Joe and Sean Clancy for more than 10 years is there’s always a story behind the story, and probably even another story. That was the case with Early Voting and his connections, who kept the colt in New York for the winter, skipped the Kentucky Derby and were rewarded for those moves in the Preakness. Jockey Jose Ortiz also provided great insight into his early impressions of Early Voting and a short conversation with him an hour after the race laid the groundwork for my coverage.

“I can’t thank Joe and Sean Clancy enough for their support, encouragement and inspiration, along with the entire editorial team at Mid-Atlantic Thoroughbred for their dedication to covering racing in the region and for the opportunity to be there to document it.”

The Eclipse is Law’s second, as he and former colleague Greg Charkoudian won an Eclipse in the audio/multi-media category for coverage of the Breeders’ Cup World Championships in 2011. In addition, Law has been recognized for writing excellence from all three Triple Crown races – with the Red Smith Award for writing about the Kentucky Derby, David Woods Award (Preakness) and Joe Hirsch Award (Belmont Stakes), plus two Breeders’ Cup writing awards. Law, 51, lives in Saratoga Springs, is president of the National Turf Writers and Broadcasters and serves on committees for racing’s Hall of Fame and the Thoroughbred Industry Employment Awards.

Law’s article is the fifth in Mid-Atlantic Thoroughbred to be honored with an Eclipse Award – following pieces by Don Clippinger in 1996, Vinnie Perrone in 2008, Joe Clancy in 2014 and Sandra McKee in 2021. Photographers Cindy Pierson Dulay (2004) and Skip Ball (1979) received Eclipses for work published in Mid-Atlantic Thoroughbred and its predecessor the Maryland Horse.

Mid-Atlantic Thoroughbred contributor Paul Halloran, a member of the ST Publishing team since 2019, earned an honorable mention in the News/Enterprise category for his piece “Fairytale,” about Cody’s Wish, which was published in the Aug. 31, 2022 edition of The Saratoga Special. Five-time Eclipse Award winner Jay Hovdey also earned honorable mention for his piece “Flightline Lands a Special Place in History,” published in the BloodHorse Daily Sept. 4, 2022.

The 2022 Eclipse Awards honoring Thoroughbred racing’s human and equine champions will be presented at The Breakers Palm Beach in Florida Jan. 26.