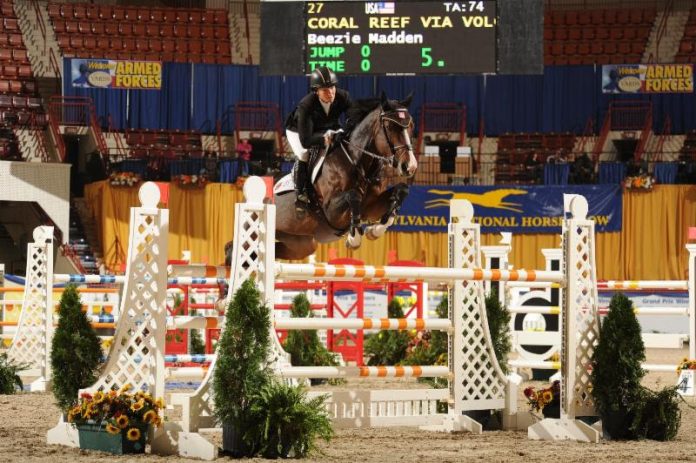 Harrisburg, PA – October 17, 2014 – Speed was the name of the game in the $33,000 Keystone Classic at the Pennsylvania Horse Show. Some of the biggest names in riding competed in the class and the spectators cheered and urged on their favorite rider as they galloped around the course.

Beezie Madden, of Cazenovia, NY, and her 2012 Olympic team partner CORAL REEF VIA VOLO, 24th into the ring, sailed around the course faultlessly in an unbeatable time of 59.52 seconds to clinch the win out of the 29 starters. The mare is known around the barn as “Shrimp” for her tiny size of 15.2 hands.

Karen Polle, of New York, NY, and WHAT EVER also jumped clear, but had a slightly slower time of 62.16 seconds to finish in second place. Switzerland’s Beat Mandli and ZAZA HARVEY finished just a fraction behind in 62.17 seconds, finishing in third place.

Reed Kessler, of Lexington, KY, was Crowned Open Jumper Speed Champion and received the Showday Farm Challenge Trophy for earning the greatest number of points in the section.

One of the most fun moments of the evening was the Celebrity Challenge 5 Drum Barrel race, in which four jumper riders competed again four of the Canadian Cowgirls. Lillie Keenan, Ali Wolff, Todd Minikus, and Charlie Jayne represented the jumpers, and were each given one of the Canadian Cowgirls’ horses to ride. Spectators cheered loudly as the riders sprinted around a pattern of three barrels. Keenan and Minikus, who were the final two competitors playfully tried to wrestle each other off of their horses before crossing the starting line. When Minikus was later crowned champion, they put their differences aside and completed their victory gallop hand-in-hand.

Next into the ring were the pint-sized pups who charged out of the gates to chase down a lure over a series of tiny hurdles for the Terrier Races. Ultimately it was Keegan, a two-year-old terrier who beat out his feisty competitors for the blue ribbon.

Live coverage of the competition, scoring results and more details on the show are all available at www.PAnational.org.

Kent Farrington Flies To Victory Aboard Jasper In The $20,000 Joe...