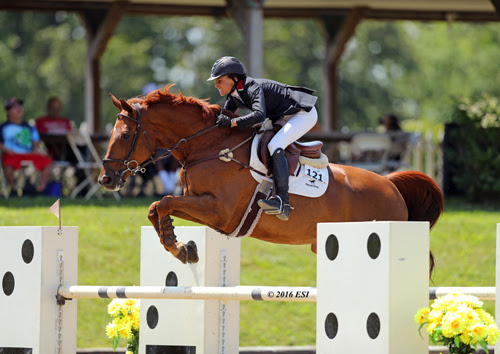 Saugerties, NY (August 6, 2016): A big day of elite competition commenced with Friday’s $25,000 SmartPak Grand Prix. An accomplished field of forty five tested the course set by Mark McGowan of Kilmarnock, Great Britain, but only one could take home the blue ribbon.

There is no slowing down when the Chapot’s are in town. Rider, Laura Chapot, and her mother and trainer, Mary Chapot, have been cleaning house this season at HITS Saugerties, and Friday’s victory just added to the impressive collection of ribbons and big payouts.

“Thank you to SmartPak for being such a great supporter of mine as well as the horse shows,” said Chapot after her win. “They make a great product and we really appreciate having them here at HITS and as a personal sponsor.”

Laura Chapot, a seasoned SmartPak-sponsored equestrian from New Jersey, won every featured Open Jumper class last week during HITS-on-the-Hudson V, in addition to an extensive string of other victories throughout spring and summer series. She returned with her dream-team of horses to once again sweep up the top spot, taking first place with Quointreau Un Prince, co-owned with Mclain Ward and fourth with ISHD Dual Star, owned by Mary Chapot.

A total of 14 returned to contest the shortened course in what would come down to of mere fractions of a second in contingency for the top five placings. The first-round course included a few tricky distances and a technical triple combination. The jump off course, set on a winding, mostly-right lead track, featured a double combination and several fences that required an angled approach.

“I think the triple caught a few people by surprise in the first round, B to C was bit longer than usual,” said Chapot on the course. “It surprised a few horses in that normally when they see vertical to vertical it’s very steady, and they’re used to that. In the jump-off, the angle at the first fence posed a challenge. There were several jumps you had to wind between to get your pace going then you had to keep the flow — keeping a good, strong rhythm was really key.”

Chapot re-entered the jump-off at the top of the order with winning mount, ISHD Dual Star. They crossed the finish in a speedy 38.479 to set the time for the remaining field to chase down.

Second place belonged to Irish equestrian Kevin Babington, riding out of Gwynedd Valley, Pennsylvania, and Double O Seven 7. They entered the ring to test the shortened course as the seventh pair in the jump-off order immediately following Chapot. They sped through the course, chasing the clock for a shot at the top of the leaderboard. They finished clear just behind Chapot in 39.077 to seal their spot in the placings.

Flemington, New Jersey equestrian Sarah Segal took home third place with Cantara 59, owned by Robert Segal. They stopped the clock at 39.394, just three-tenths behind Babington to bring in the yellow ribbon.
Chapot and her fourth place mount, ISHD Dual Star, came in again and had a fantastic clear round, but finished fractions of a second behind Segal’s round in 39.577.

Rounding out the top five was Christine McCrea of East Windsor, Connecticut, and Win For Life, owned by Candy Tribble and Windsor Show Stables, Inc. They crossed the timers in 40.027, claiming fifth for their efforts.