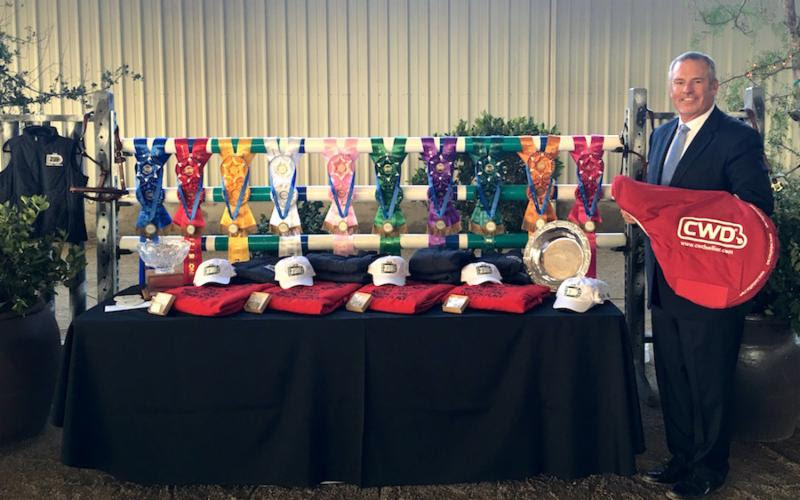 August 21, 2016 – San Juan Capistrano, CA – As the first Medal Final of the season, the California Professional Horsemen’s Association (CPHA) Junior and Amateur Hunt Seat Medal Finals set the stage for top notch competition. Paul Bennett, CPHA Awards Coordinator (pictured above), dressed up the indoor with a stunning display of ribbons, sashes and more, enhancing the championship experience. As host of this annual tradition, Blenheim EquiSports held the class in the Blenheim Farms Indoor Arena, the home of ACE Equestrian and the Cotton family.

Sarah Booker, Stacia Madden and Kip Rosenthal judged the three round competition, which included a hunter-type course, a jumper-type course, and a final, more technical equitation course for the top ten.

Round one on Friday and round two on Saturdayafternoon combined to determine the top ten scoring Juniors and Amateurs, who returned to compete for the top prize on Saturday evening.

Kacie Doyle of San Diego aboard her own Jet Jones earned the win in the Amateur Division, and Ransome Rombauer, riding Lalonde (Alexis Graves, owner), was top score in the first and third of the three rounds to lead the victory gallop by a large margin.

Beginning with an entry list of 51, the Junior Division included a strong group of top West Coast equitation competitors. Scott Starnes designed a first round that tested the ability to ride a track with turns and long gallops, including an option jump early on and jumps on both the short ends of the arena.

A few rounds later, Emma Crosbie finished with three scores in the eighties for 248 total, putting her in 5th overall, with ten points separating the top five after round one. Toward the end of the order, Samantha Gastelum earned the 4th spot in the standings.

More superb riding changed the top slightly during round two on Saturday afternoon. Sitting 7th after round one, Emily Maclean jumped into the 4th position, earning the highest scores in round two. Also quite competitive in the jumper round were Marlowe, Rombauer and Katie Browne, with just three points separating the top four scores of the round. Carrying a zero from round one, Browne didn’t advance, but earning an 88, 84 and 88 in the second round, she ended on a top note.

Going into the final round on Saturday evening, the top four all carried cumulative scores above 500. Rombauer held the top position with a two-round total of 519, with Marlowe sitting second with 513.5, Dejong in the third spot with 508.5 and Maclean moved into fourth overall with a total score of 507.

The final round was an eleven obstacle track with an option at fence one, two combinations and challenging distances. As often seen in the pressure of Medal Final performance, some positions shifted and others jumped up in the placings.

Rombauer, Gastelum, Nina Vogel and Eli Yeager each rose to the challenge, ultimately earning one of the top five spots, with Marlowe slipping into third. With scores of 91, 90, and 90, Rombauer achieved a final score of 790 for a landslide victory.

As the 2016 CPHA Junior Medal Final Champion, Rombauer entered wearing a medal around her neck and holding a beautiful bouquet of flowers, while her mount was dressed in a championship ribbon, sash and a wool cooler sponsored by Damoors Feed & Tack. She also won a new CWD saddle, an Antares helmet, a leather halter from Valencia Saddlery, as well as CPHA collectibles including a vest, a belt buckle and a stall plaque. Along with taking home a trophy to keep, her name will also go on the perpetual trophy.

Rombauer’s equitation mount is the lovely Lalonde. Known as ‘Frenchie’ in the barn, Rombauer has leased the gorgeous chestnut for the last three years. Training with Daniel Ighani, with coaching assistance from Karen Healey, the high school senior is rounding out her final junior year with some big goals, seeking to achieve a top five call in all the regional finals and a top 20 placing in the national finals. She has already earned a Gold Medal by winning twenty USEF Talent Search Medal classes before turning 21.

When not focused on school or sitting on a horse, Rombauer is known for her work rescuing, working with and rehoming miniature and also non-miniature horses.

With fifteen horse and rider combinations in the Amateur Division, Kacie Doyle and her equine partner Jet Jones came from behind to earn the top call. Sitting in fourth after round one, and second after round two, the pair clinched the win with the top score in round three.

Riding over the same tracks as the juniors, first to go on day one, Haley Webster entered the arena and laid down the winning ride with an 82, 83, 84 for an overall score of 249. The top four scores were within eight points of the lead, with Shannon Davidson coming in second, Emily Hartley third and Kacie Doyle fourth in the first round.

Earning the highest scores in round two, 87, 83.5, 78.5, Doyle moved up to second place with an overall score of 490. Webster held on to the top spot. Davidson slipped to third and Hartley fourth.

As mentioned previously, the final test can rattle the nerves and often changes the placings a bit. Doyle kept her composure and led the round by one point, finishing with excellent scores of 84, 87, 86, for an overall of 747. Earning final round scores of 85, 86, 85, Theresa Boucher jumped up from fifth to finish second overall.  Webster, who tied with Boucher in overall points, slipped to third and Belle Calkin moved from sixth to fourth, rounding out the final top four in the Amateur division.

Doyle was thrilled to triumph in her third attempt at these medal finals. Training with Hap Hansen Stables, she has ridden her horse ‘Jett’ for almost five years.

Finishing her final round, she was all smiles. “I love this horse show,” she said after her victory. “After the CPHA Foundation Finals and a few more shows, Jett will retire and I’m going to focus on the jumpers.”

Shannon Davidson, the top placing 36 & Over Amateur rider in the Finals, earned fifth place, and was awarded with a Tiffany necklace and a cooler.

Blenheim Summer Classic concludes today with the Celebration for Robert Ridland, Coach of the 2016 Olympic Silver Medal Show Jumping Team, followed by the $30,000 Markel Insurance Grand Prix, as well as an Interactive Mortgage U25 Qualifier. The CPHA Medal Finals season continues next week in Del Mar at the Showpark Summer Classic with the CPHA Foundation Equitation Finals.

Lumiere Horses’ Gabriela Reutter Scores Back to Back FEI 2* Victories...