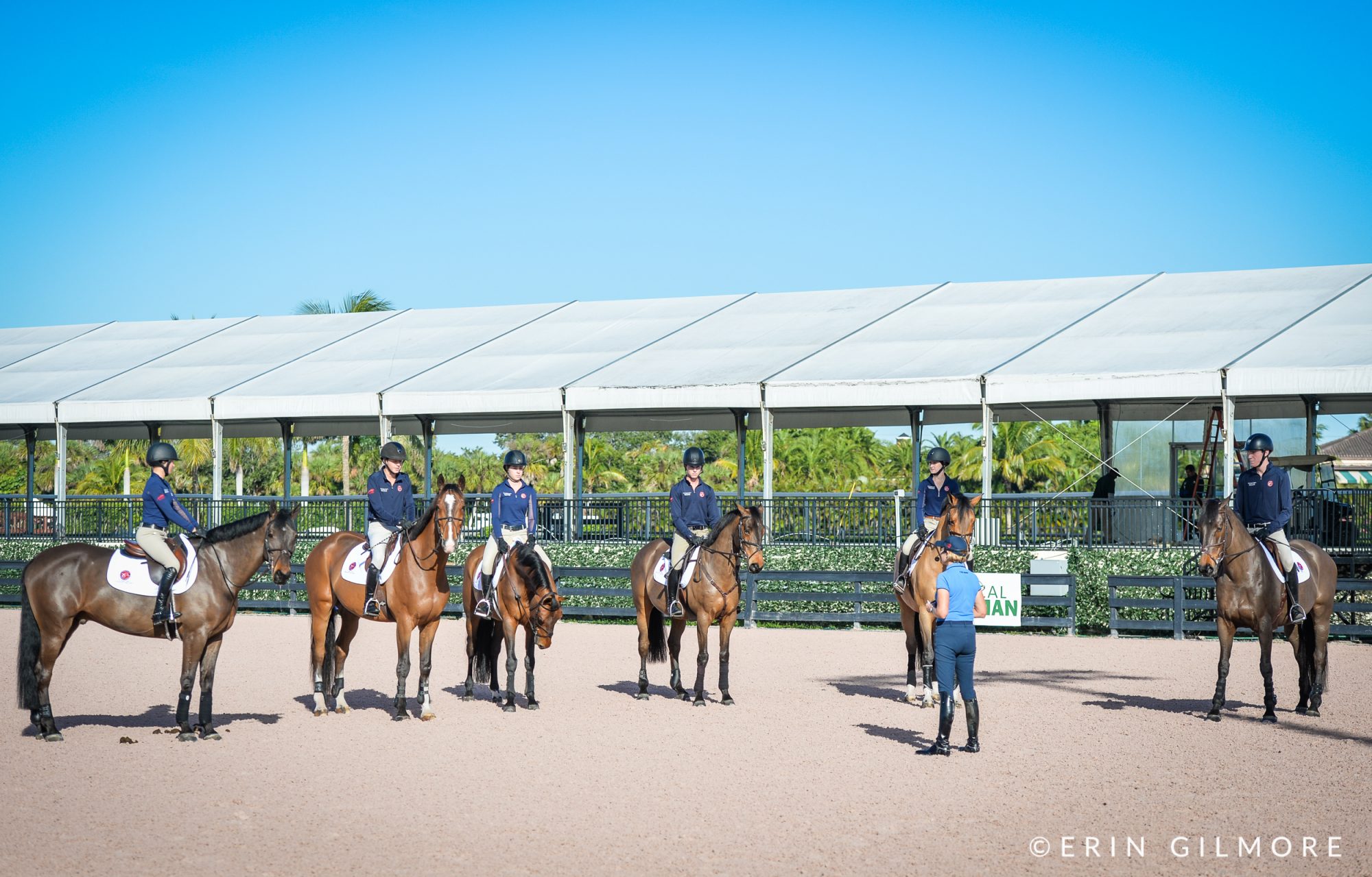 “In front of the leg, that’s what we’re going to talk about,” Anne Kursinski said calmly through her microphone as her horse stood up on his hind legs underneath her. Day one of the 2017 George H. Morris Horsemastership Training Session started off with plenty to talk about and lots to learn on January 5 in Wellington, Florida. Kursinski led the first mounted session of the week, focusing on flatwork routines with the 12 riders who qualified to attend through their 2016 results in major USEF competitions, the Emerging Athletes Program, and via wild card selection.

Kursinski might not have counted on her own demonstration horse, an 8-year-old warmblood named Caspar, giving quite the dramatic demonstration of freshness, but she handled it with aplomb and took attendees through every step of her ride. Within a few minutes, Caspar was listening to Anne’s soft rein aid and consistent contact, which he accepted in short order until he was indeed moving happily around the arena in front of the leg. as she watched and coached them through the movements. Any rider can relate to the pressure of riding in 90-minute flat sessions under the scrutiny of Anne, a group of spectators and a wider audience watching online from home (USEF Network reports that the GHM Horsemastership is their most-watched broadcast all year), but these young riders displayed skill and professionalism beyond their years.

A relaxed start with simple walk trot transitions developed into the real work; lateral movements, extensions, and plenty of drumming on the basics. By quizzing the riders often on their takeaway from each exercise, she kept up a collaborative balance that encouraged independent thinking.

Coco Fath, Maddy Goetzmann, Taylor St. Jacques, Cooper Dean, TJ O’Mara and Brian Moggre made up the first group, and entered the arena at 9:30am with the advantage of riding when temperatures were cooler (by Florida standards).

Finding not just a connection, but a consistent connection to create a round frame was key, and each horse handled the aids differently. Cooper’ hot-blooded, 15-year-old mount WEC Quidam-Quidam wound into a tighter and tighter ball until Anne asked him to hand over the reins for a few minutes. The riding lesson she gave is worth a replay: with a light, but firm seat, she rode the gelding into an accepting contact and relaxed frame inside of ten minutes, cantering with one hand on the rein and the horse stretching long and low.

“Don’t be overly critical of yourself,” she said. “How do you solve the puzzle differently? How do you ride effectively and correctly?”

It wouldn’t be a clinic in the name of George Morris if a long stretch of sitting trot weren’t included. Anne kept up this tradition, with the added challenge of reins knotted short to keep riders’ hands quiet, and in front of their saddle. With no stirrups and knots in the reins, Anne got tougher, demanding accuracy in transitions and in responsiveness from the leg. It wasn’t good enough for a horse to back up when it was asked for a turn on the forehand, and Anne narrowed in on the connection between weakness in rider position and weakness in the aids.

During the second session, she again retrieved her helmet from the rail and mounted up on Maya Nayyar’s horse Carlina. The mare’s shifting legs quickly began moving with purpose under Anne as she emphasized the importance of effective position. Group 2 riders Caroline Dance, Emma Marlowe, Gracie Marlowe, Halie Robinson and Michael Williamson looked on.

Those lessons will certainly carry over as the GHM Horsemastership Training Session moves on to a day of gymnastic jumping instruction by Beezie Madden, on Friday, January 6. Madden will also begin the day with a riding demonstration before guiding the two groups of riders through jumping exercises.

The 2017 GHM Horsemastership Training Session is available to watch live and on replay on USEFNetwork.com.

Keep your eye on the ball