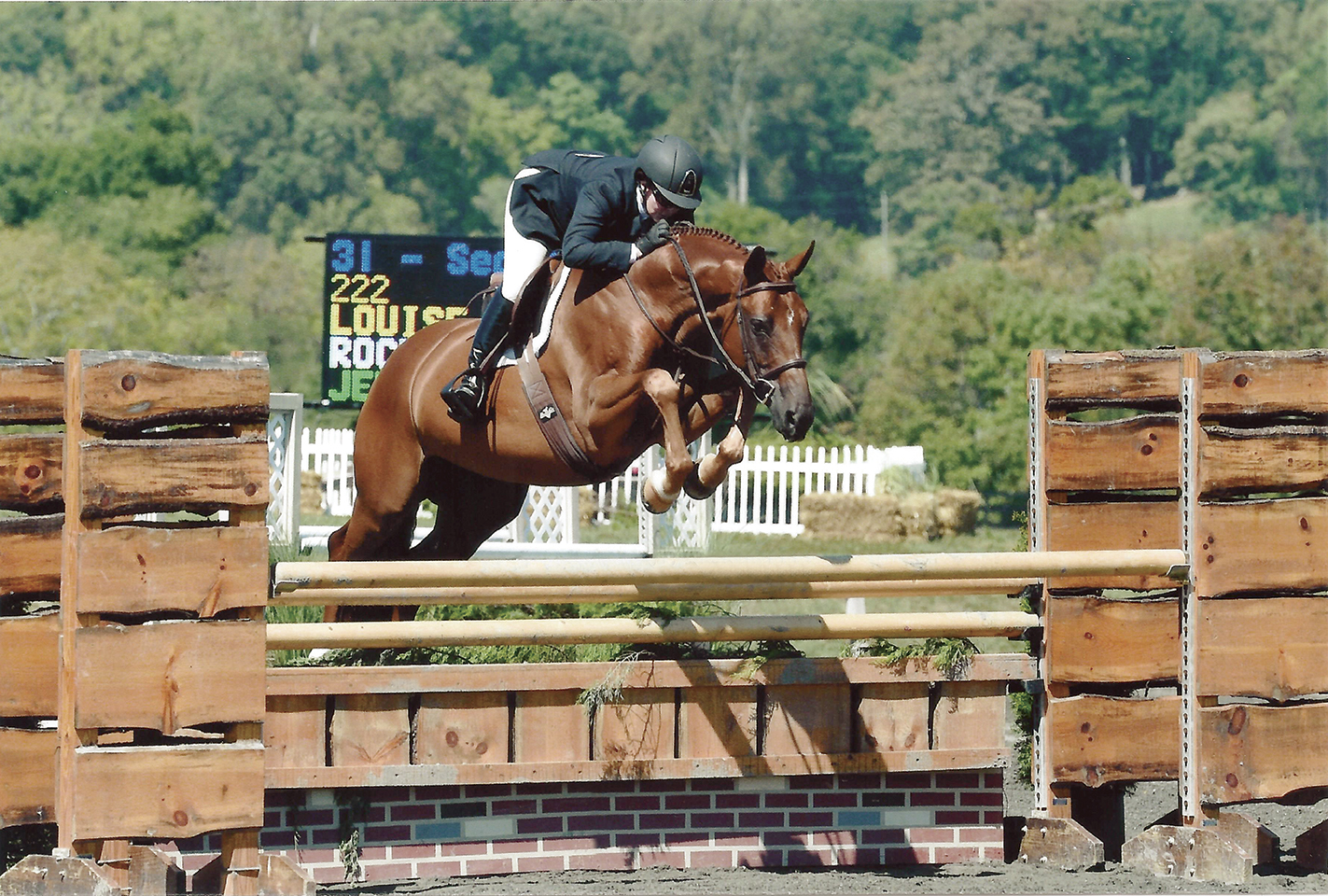 10 things to know about Louise Serio:

2. She is the oldest professional rider to be champion at Indoors.

3. She loves all things Star Wars.

4. She owned a reining horse and competed on it.

6. She has a granddaughter.

7. She has been Champion or Reserve Champion at the Devon Horse Show ten times.

8. She has ridden in three Grand Prix jumper classes.

10. Four generations of her family have resided at Derbydown in Kennett Square, Pennsylvania.

Find this story and more HERE, in the Feb. 2017 TPH Stallion Issue!

Horses are the essence of Louise Serio. They are her oxygen, her lifeblood. Growing up on a farm known then and now as Derbydown, Louise was riding as soon as she was able to keep one leg on each side. Her parents were horse trainers, her sister Mary Wade was an equestrian prodigy, and Louise was always happiest in the barn. Today, in her sixth decade, Louise Serio has left an indelible mark on our horse industry. She has reached the pinnacle of success as a rider, trainer, and mentor. She has founded far-reaching equestrian programs and foundations. She has raised a family, maintained a singular level of horsemanship, cultivated a premier facility, and engendered camaraderie among her peers. The most amazing thing about Louise Serio: she is not finished yet. Not even close.

In 1949, Louise’s parents, Mary and Buzz Warner, began a riding school at a rented facility in Unionville, Pennsylvania called Derbydown. Legend has it that the farm was won in a poker game when one player, out of money, was down to betting his hat. The player set his derby down on the table, won the hand, and subsequently purchased the farm. When the rented facility burned down, the Warners moved to another facility and took the name Derbydown with them.

The current home of Derbydown was purchased in 1958. A converted dairy barn nestled in bucolic Chester County, Pennsylvania, today it is still an oasis within a carefully preserved area. The Warners taught riding on a string of lesson horses that accommodated every level of rider. On Mondays through Wednesdays, Mary Warner taught outside clients hour upon hour, day into night. Thursdays and Fridays were lesson days for boarders. Saturdays or Sundays were filled with horse shows and foxhunts. Mary studied the art of riding and read books by the masters. Basic skills were paramount: position, feel, correctness. Horsemanship was integral as even the recreational, weekly rider was quizzed on basic knowledge of tack and the parts of the horse. Through her mother, Louise inherited her unwavering commitment to teaching the fundamentals. “I truly believe in the absolute importance of the basics of riding,” Serio explains. “It is hard to progress without the building blocks.”

Serio’s childhood is the stuff that horse-crazy kids dream of. At the time, Derbydown bred Shetland ponies. So, when Louise needed a new mount, she would march out to the field and grab one. She would teach the ponies to ride, drive, and swim. She would ride over to friends’ houses to spend the night, a change of clothes in her saddlebag. Foxhunting, pony club, horse shows, gymkanas, bareback, cross country, Western, English. Surprising given her success as a professional is the fact that Louise was not the celebrated equestrian in the family. Her older sister, Mary Wade, garnered most of the attention and praise. “I was not the chosen child, which may have been a plus. I was just having fun with no pressure. It was between the shows that I had the best time; I never felt like I had to win. I did not have good horses and I fell off a lot! But, I learned how to ride.”

And ride, she has. Serio has had arguably the longest, most successful hunter career in the history of the sport. Her roster of successful horses includes Red Panda, Gray Slipper, Irresistible, Harbor Bay, Catch a Spark, Rock Harbor, El Primero, and Castle Rock. Serio estimates that she has been Champion or Reserve Champion at the Devon Horse Show ten times in her career. In 2016, she was Champion at the Capital Challenge Horse Show, marking the latest big indoor win. Serio marvels at her good fortune. “I have had some seriously good horses. I watch old videos and think, ‘Wow, those were great horses by any standard.’”

In addition to her riding accomplishments, Serio has been a pivotal influence in the life of many young professionals. Sandy Farrell spent some of her junior career at Derbydown, returning as a young professional to ride for Serio. Similarly, Amanda Lyerly had a long, illustrious junior career with Serio and has grown to become a top trainer and rider. Ashley Hotz, Kim Zindel-Busby, Chrissie Kear, Troy Hendricks, and Linda Carrothers are among other young professionals who have benefitted from time at Derbydown. Long days, hard work, high standards. Honesty, loyalty, solidarity – all are hallmarks of the Derbydown experience that forever imprint the fabric of those who work there.

The riders of Derbydown have competed in the amateur, junior, pony, jumper, and equitation rings with decades of success in each. Most recently, Serio trained two noted junior riders in Grace Socha and Caroline Dance, both of whom were recruited by their top choice colleges as NCAA riders. Dance was a 2016 Emerging Athlete Program Finalist and qualified to participate in the George Morris Horsemastership Training session in Wellington, FL. Dance began riding with Serio as a young child and transitioned to local trainer Ellen Derrick. The young rider competed on a local level showing ponies and learning solid horsemanship skills. Four years ago, Dance returned to Derbydown on a children’s hunter horse. Under Serio’s tutelage, she moved to the Junior Hunter Division and was Champion at Junior Hunter Finals. Adding the jumper and equitation rings to her show schedule honed Dance’s equestrian skills, culminating in the opportunity to participate in EAP Finals. Serio praises her student. “She is talented, personable, polite and thoughtful. That goes a long way.”

Sport is contest; contests produce winners. The list of winners of significant classes, Horse of the Year Awards, and championships over the last forty years is long and illustrious. The list of equestrians who have significantly contributed to the sport during the same time period is considerably shorter. Louise Serio has tipped the axis of the equestrian world. Her hand has been in the formation of momentous programs such as the World Championship Hunter Rider Program, the USEF International and National Hunter Derby, the USHJA Foundation and Making a Dream Program, and the Pre-Green Incentive Program. She has been sitting on at least one USEF or USHJA committee since the 1990’s. “I was head of the AHSA Hunter Committee for almost ten years a long time ago. The names of the organizations have changed over the years, but I have always been involved in that part of our world. I have put my time in with governance. It doesn’t matter who you are, you have to get involved to make a change.”

As a professional who operates at the pinnacle of equestrian sport, Serio is cognizant of the need to cultivate the grass roots component of the constituency. A founding member of the USHJA Foundation, she was instrumental in creation of the Horseman’s Assistance Fund and Making a Dream Grant programs. The Making a Dream movement began when Serio was a member of the Hunter Team competing at the 2010 World Equestrian Games in Lexington, KY. She walked to the ring to watch a young girl giving an impressive trick riding demonstration. The young athlete was Lizzy Traband who was born with only one hand. “We started talking and her dream was to come to Wellington. I went to the Foundation, asked if we could make this happen for her, and Making a Dream began. Our industry is very generous and helpful.” Since that inaugural grant in 2011, Making a Dream has helped six riders facing hardship achieve their dreams.

Serio is a vocal proponent of the Trainer’s Certification Program, the Horsemanship Quiz Challenge, and the Emerging Athlete Program. Of the TCP handbook, she exclaims, “I love that book! It has such helpful information and lesson plans. Trainers need to have that knowledge. I think trainer certification is huge.” She believes in the absolute importance of identifying the needs of the entire horse show community and creating programmatic initiatives to serve all. “I think that we are on the right track with the hunters. We have good horses, footing, and jumps. The majority of us are honest, although the few cheaters make it hard. We need to continue to grow with Derbies and specialty classes to make it interesting. We need to educate and elevate.” Described by friends and clients as “indomitable,” “tireless,” and “a force,” Serio is often the first one on the tractor in the morning dragging the ring and the last one up at night going over accounting records or scouting new horses.

What is next? “I will always ride, that is certain,” she states. “But, I would like to ride less, train more, and help my young assistant trainers ascend. I have two great professionals to launch into the business. ” Serio employs two highly qualified assistants and riders in her daughter, Chrissy Serio, and Julie Oliver. An accomplished rider and perceptive teacher, Oliver hails from the Midwest and brings extensive pony ring experience learned from the late legendary pony expert, Mindy Darst. Oliver joined Derbydown after managing the hunter string of successful exhibitor Bryan Baldwin’s Meralex Farm. Chrissy Serio brings hunter and jumper knowledge to the business. Having successfully ridden both Grand Prix jumpers and International Derby horses, the young protégé has great feel, a natural eye, and a bright future. Look for Louise Serio and these young trainers in the pony, jumper, hunter, and equitation rings. With their mentor at the helm, the group will be a formidable presence. Serio plans to pass the torch of excellence and achievement to younger participants in our sport, including her granddaughter, Mary. Slowing down is not part of her vernacular. “I love this business because there is always a variety of things to do. Every day is different; every day presents a new goal.” Rider, trainer, mentor, visionary, Louise Serio will lead the next generation as they transform our equestrian world for the better. ◼

A Lifelong Bond Keeps This Blind General Going Without Eyes