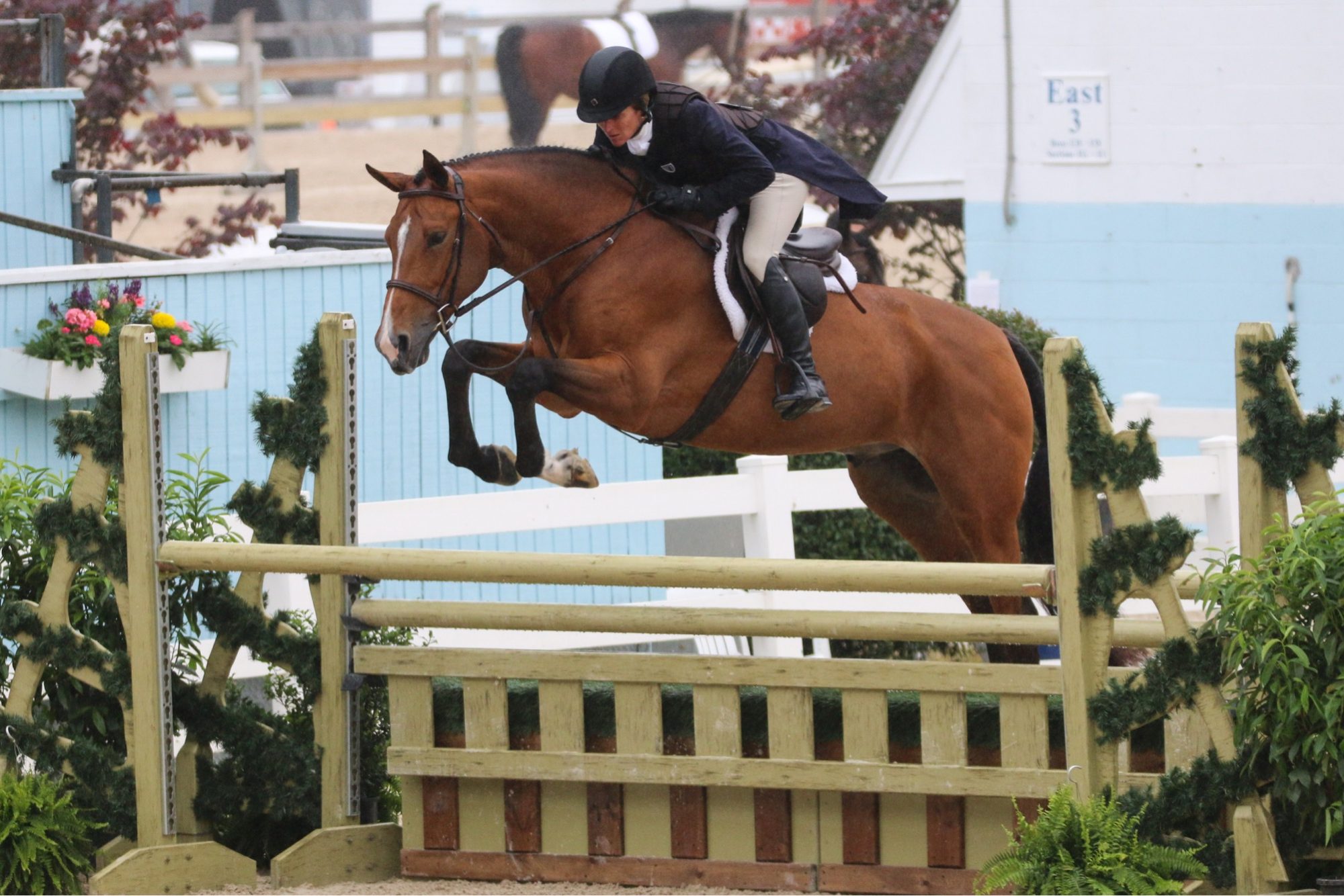 It had been nearly a decade since Sandy Ferrell had taken the long walk to the far end of the Dixon Oval to receive a tricolor. While waiting for the presenters to line up, she couldn’t help but throw in a few dance moves to celebrate her win. After a nine year drought at the Devon Horse Show, Ferrell rode Aizlynn Radwanski’s Because (Verdi x Paola) to the Championship in the 3’9” Green Hunters.

Ferrell grew up riding locally, and worked with Linda Andrisani and Jack Stedding as a junior. Upon completing college in Maryland, she started her professional career with Louise Serio.. After spending several years with Serio at her Derbydown, Ferrell went to the West Coast and worked for Carleton Brooks and for a family in Omaha, Nebraska. In 2002, Ferrell decided to move back to the East, where she opened her Royall Show Hunters, based in Bernville, Pennsylvania, and Wellington, Florida. Since that year, Ferrell had yet to walk out of the Dixon with a Championship until this year’s edition of the Devon Horse Show. Ferrell was left out of the saddle for the first part of the 2016 season after falling off a young horse and fracturing three vertebrae in her back and puncturing a lung. Despite having little pain, Ferrell took time out of the saddle to allow her back to heal properly, and donned an extravagantly decorated back brace during the winter circuit.

Since then, Ferrell has begun using a safety vest, more commonly seen on eventers during cross country. Ferrell wears the brace on the outside of her show jacket, and takes it off only for jogs and award presentations. “It feels like my seatbelt,” Ferrell said. “I won’t get on a horse without it.” Her mount at Devon was the incredible Because, which was bought in hopes of taking Radwanski to the winner’s circle in the Amateur Owners. “We knew that if Aizlynn wanted to be competitive in the AO’s, she needed to have the best horse we could find,” explained Ferrell. And thus, the Radwanski family began searching. Through a serendipitous conversation with a friend, Aizlynn discovered that Jane Gaston was selling Because. Because joined Ferrell at the Winter Equestrian Festival and collected the 3’9” Green Hunter Championship in Weeks 11 and 12,, as well as collecting ribbons with Aizlynn in the Amateurs. After just a few weeks of showing him, Because went to Devon. Ferrell and Because won the first class, but Ferrell admitted to making a mistake in the second class that day, leaving the pair out of the jog. The next day, Ferrell simply wanted to do her best, and walked away with a second in the handy, followed by a win in the Stake Class. Because’s efforts earned the duo the Championship, and created possibly the happiest Devon blue winner of the show. Because also went on to win a class with Aizlynn in the Younger Amateur Owners.

Ferrell’s outgoing nature and wide smile while riding show just how much she loves what she does. While her riding talent is in no question, she has now grown into a role model, inspiring others to put safety first. “If I can inspire just one person, it would be worth it,” she said. “I’ve been asked whether I think my vest has hurt my placings and I just look at them and say ‘Well, I just won a Championship at Devon!’”