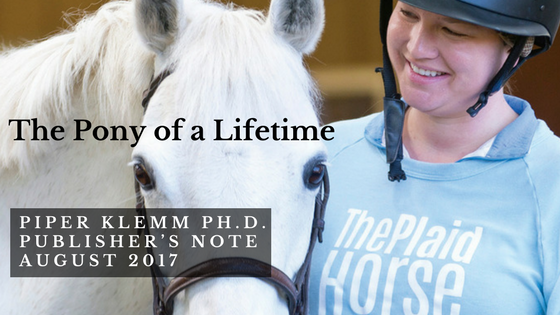 See this article and more in the 2017 Pony Issue HERE

As we prepare my fourth Annual Pony Issue and read all the stories of ponies who made their people, I have to share my favorite pony story. The pony was two years old, unbroke, and to call a two year old pony a monster is redundant. She was opinionated about simply everything. Trips to the paddock led to shredded blankets. Reins flying too fast over her head were broken. She was not patient while the little girl practiced braiding her jet black mane. And God forbid she had her mane pulled or ears clipped. No, the pony did not tolerate that at all. Some days were so hard that the little girl wanted to give up, but her mother supported her to keep trying and see what she could do.

It took the little girl forty minutes to catch her in her stall some days. But, the little girl had a pony. This was her pony and her only option to jump or show or trail ride again was to make it work. She pulled up a chair, put a basket of carrots next to her, and began to read her homework out loud. She couldn’t get behind in her schoolwork just because the pony was being stubborn. Eventually the pony wandered over and tentatively ate a carrot. She did it the next day and it didn’t take quite as long. She continued every day until the pony walked over and just hung out munching on carrots while she read her homework. One day, the pony nickered when she heard the girl’s footsteps coming around the corner and was waiting with her head out of her stall.

Then the pony needed to be broke. The girl laid over her back in her stall for weeks. From the left side, from the right side, patting her and taking it slow. Finally, she swung her leg over and sat up. The pony seemed huge. She was the biggest pony the little girl had ever ridden. She felt on top of the world.

Next came riding in the ring, trotting, cantering, lead changes, first jumps, first horse shows, baby green hunters, and incremental successes that thrilled the little girl. The pony won the under saddle and always put a smile on the shy girl’s face. The pony loved to jump and horse show and show off her athleticism. She continued to test nerves by jumping out of trailers, paddocks, and generally living life as she felt like it.

When the pony grew up and the little girl was not so little and didn’t look good on her, the pony started to be leased out and moved to California. The pony had found her home – she traveled up and down the state, never changing esidence, winning all that was available to her, and teaching little girls over and over to ride and to win. The pony was very competitive once she got a taste of horse showing. She hunted down her own distances out of the turn and performed in the ring. At home, she barely left the four beat canter and found practice to be rather boring and unnecessary.

She never stopped being opinionated. She still will not stand for being told what to do. She rears when you pull her mane. However, she has acknowledged that clipping her ears is cool in her old age. When asked, and not forced, she excelled at every task. She is the only pony I know to win in every program and with every trainer she went to. Today, I unloaded my Butet from my car and heard a nickering as I rounded the corner and she heard my footsteps. I groomed and tacked up Brighton Boast A Bit, the Posey Pony, age 19. While brushing her, I listened to a story of how they had turned her out in what she felt was the wrong paddock the week before, and she jumped out to graze in the “correct” paddock. Currying her now flea bitten coat brought back as many memories as riding her. Jumping her around, I never touched the reins and she hunted the distance out of the corners. Despite the many big horses I’ve now ridden, she still feels larger than life – her step, her jump, and her absolute importance.

She bought that saddle and my first plane ticket to Florida, and she marshalled me into the Gold Ring for the first time. Looking back, those are not the things that really mean the most. You see, she took all of the lessons that we learned together and used them to be one of the winningest ponies of her time, as well as a great teacher for generations of riders. I adapted the lessons she taught me to achieve through the progressions of my life and be a more considerate teacher.

To the pony who made me – who made me believe in myself, who taught me how to win. She taught me that anything worth doing is worth fighting tooth and nail for, and that anything is possible if you want it badly enough and do not give up, ever… Thank you Posey.

See this article and more in the 2017 Pony Issue HERE

The Show Should Not Go On: Why Horse Showing in Inclement...