Home Blogs Barn Lounge The Horse Made Me Do It 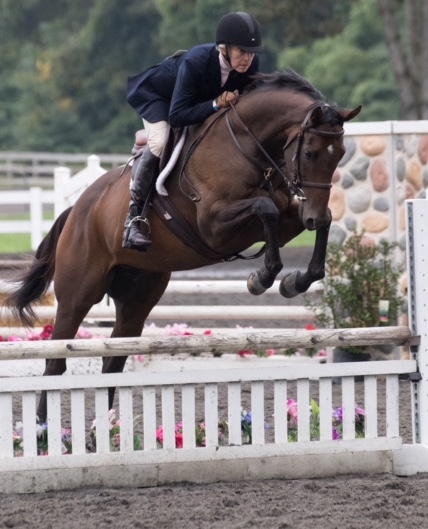 Above: Prue Osborn and Milo in the Baby Green Hunters.

After a little walk, trot and canter and two or three tiny jumps around an actual ring I knew this little off-the-tracker could be a show hunter.  Oh well, I thought, instead he is going to be my next foxhunter.

Horses I have chanced into in recent years have made me go directions I didn’t see coming.  Several years ago, my vet told me I just had to get a particular horse that was coming up for auction soon.  Our local horse community had been rocked and robbed blind by an unsavory guy who masqueraded as a rich polo-playing financial investor. He wormed his way into the lifesavings of many in what turned out to be a Ponzi scheme. With his ill-gotten gains, he had bought a glamorous horse property, built a mansion, bought a fleet of Irish hunting horses and a stable full of polo ponies.  Once on his way to the slammer, all of those and the very grand spoils of his phony life were auctioned in order to payback those he had robbed. Thus, I found myself the owner of a horse I, of course, named Ponzi who wanted to kill me if I dared enter his stall, wouldn’t make more than one circle in a ring before turning belligerently terrifying and even had to be cajoled into hacking cross country. Ponzi was only meant to do one job and at that he was amazing – dashing through the countryside with 70 or so others, jumping anything in his way, chasing a pack of hounds chasing a fox.  I had not foxhunted for 37 years.  Yes, 37.  But, Ponzi took me back.  I love it and I loved Ponzi, but only when he was hunting.

Milo, whose Jockey Club name is 60 Milesperhour, did not turn out to be that fast or sound on the track. Thankfully his knowing trainer and generous owners enabled him to try another career and he came to me. Luckily, he is sane, willing, athletic, brave and has so far shown no desire to kill me. We started out taking little hacks through the countryside with my patient neighbor as a babysitter, popping over logs that littered the paths and eventually actual small hunting fences.  I would do some flat work in my field, but soon it was time to put him in an actual program. Milo didn’t bat an eye going into an indoor for the first time.  I’ve gone this road of bringing along a young horse before and there is nothing more satisfying and fun than to feel the progress every week seems to bring.

It wasn’t long before my trainer said, “Prue, you really should take him to a show. I think he wants to show.”  She knew I had spent a lot of my young life showing at local and not so local shows.  As I got older, my performance anxiety escalated and it was only fun when it was over.  Standing at the in-gate I was ridiculously close to vomiting.  I couldn’t talk myself out of the nerves, so it was a relief to put that behind me.

I never looked back, until 20-some years later, when I had a youngster who wanted to be a show pony. I did not sleep the night before our debut in the not-exactly-daunting, yet to me still terrifying, baby green hunters.  Milo, my groom-in-training husband and I arrived at the little local Chester County horse show before anyone except one other early bird trailer. I was a little shakey, but Milo was calm and curious.  Warming up and schooling went well and I considered packing it in right then.  That would have been success enough, right? Apparently I was the only person who thought so.  I was entered, along with almost 30 other baby greens.  Yikes. There was no turning back now.

There were two hack classes and I was thrilled to maintain my composure and enjoy it.  I couldn’t believe how relaxed I was feeling. But, that was then. Time for two back to back classes over fences. It was happening again.  I hadn’t outgrown it.  I was on deck and I couldn’t feel my appendages.  I was going to need those to get around the ring. I was queasy.  I told myself to snap out of it.  It was supposed to be fun. I mean, really, this is a far cry from real show pressure. The gate opened and in we went.  I remembered the course, Milo remembered how to jump, but there were way too many moments where I forgot everything I ever knew how to do, like breathing and lead changes.  I reverted to foxhunter. Nervous, ugly foxhunter. It wasn’t pretty. We could be pretty. But, we had another chance.  Although sickly and shakey kneed, we got some things really right and the second round was verging on pretty. But, I still didn’t remember to breath.  That might help next time.

This horse, my trainer insists, really likes the confinement of the ring. So, there was a next time and we even brought home a ribbon.  I got better about remembering my role and Milo was nearly perfect.  He’s also a beginner foxhunter and seems to think that’s ok, too. It’s a lot to ask to want him to do a little of both, but if I can harness my stage fright, he can chase some hounds, all in the name of fun.

Prue Osborn is a freelance writer and avid fox hunter with Mr. Stewart’s Cheshire Foxhounds. She is the author of Scarlet on Scarlet, 100 Years of Hunting with Mr. Stewart’s Cheshire Foxhounds. Osborn has written several historical articles for The Plaid Horse including pieces on Michael Matz and Side Saddle. She lives in Unionville, PA with her family, horses, and mini-donkey, Moe.

Jessica Lohman: A Woman in All Corners of the Equine Industry