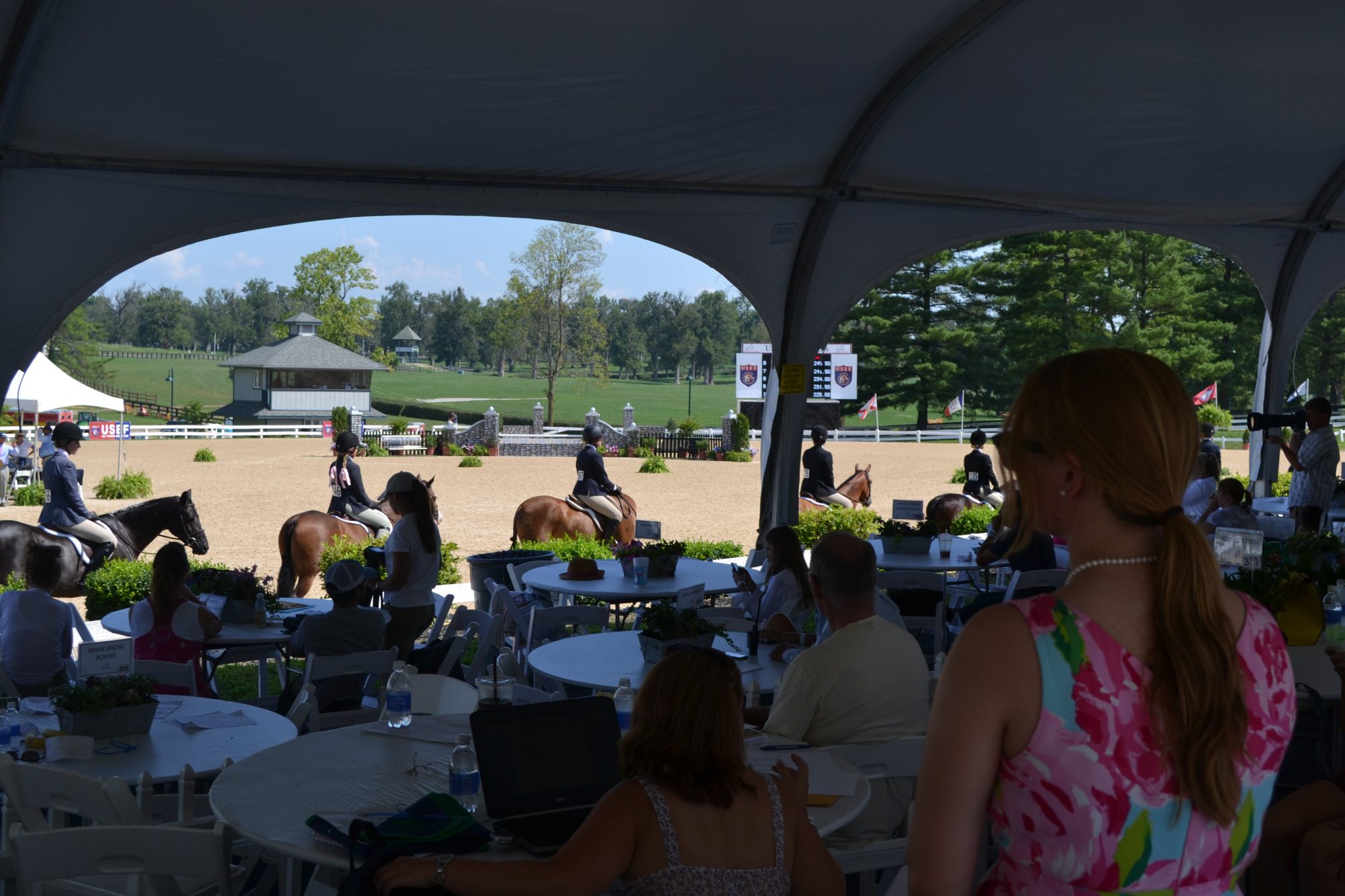 Above: The author enjoying every minute at USEF Pony Finals in 2012.

Dedicated to this year’s Finals competitors

Six years ago, I was living in California, publishing like mad in academia, and had put my foot in the stirrup about twice after an eight year hiatus from the saddle. My version of a toe back into the water of the horse show world was buying one, then two, then three lease ponies. It was an exciting year for me. In my first year back at it, my ponies had a lot of success in the Green Pony Hunters. All four that I owned qualified for Pony Finals that year and we decided to take the big plunge – I decided to fly one to Kentucky.

It was exciting in the way that only new things can be. Despite from my research stress, dash for year end awards and accolades in my dwindling graduate school career, and reviewer comments, I would look up from the pipette each day in the lab that summer and just smile. It was happening. One of my ponies was going to compete at Pony Finals.

I called my parents and invited them to come. My dad was available and flew in from Portland, Oregon.  Driving from the airport to the horse show that August, we had the very real conversation that this might never happen again. We talked about how we had to do every single thing because this might be my first and only trip to the Kentucky Horse Park. We talked about how we had to enjoy every minute because life is life and this was a huge trip, a huge expense, and it probably wouldn’t be feasible ever again.

And enjoy we did! Very few people are brave enough to bring a 5 year old pony to Pony Finals.  I don’t know if I was brave or naive, but the deck stacked in my favor as we came home with model, hack, and overall prizes, as well as Best Turned Out Pony. I was legitimately shocked by our success, the Kentucky Horse Park and everything it offered, and all of the people I met. The consummate experience. I flew straight to a conference to be named a 2012 Future Leader in Chemistry at the SciFinder campus in Ohio, and banked the memories away for a lifetime. If that was ‘my’ Pony Finals, it was pretty incredible.

As most of us know, my life ended up changing dramatically. Between 2012 and 2013 Pony Finals, my husband Adam Hill applied, interviewed, and was awarded an Assistant Professorship at St. Lawrence University in Canton, New York and we trekked back east. The ponies followed us soon after to join Stonewall Farm in Wisconsin. Pony Finals became a very attainable goal. For the last five years, I have attended, cheered, cried, brought home a haul of prizes, and covered for The Plaid Horse.

Why am I telling you about this?

Because this Fall, all I have heard is a cacophony of “next year.”

Next year, Harrisburg will have their footing figured out.

Next year, the live streams will work.

Next year, the vendors will have a good year.

Next year, the stands will be full.

So many people in the sport get a shot or two. The backbone of our sport is amateurs heading back to indoors for the first time as adult riders, juniors who do the medals once, riders who have that one special pony that puts them on the national stage, a feat they won’t ever replicate in their riding career.

We appeal over and over to the ever- dwindling core group of people who can guarantee to us that they will be around next year. Is that how we grow our sport and make it great? Or do we look toward the future, demand change now (right now, this year, this instant), and make our sport what it should be – a group of finalists all hoping to have the day of their lives in a hallowed indoor arena?

My business has grown in scale and is supported by a structure sturdy enough to guarantee that I will have ponies competing at Pony Finals for the next decade. We know what trainers will definitely be at Medal Finals next year. But think about the middle and bottom level – the trainers that are one or two clients away from bailing all together and not making the trip, the ones that might take a client or two a few times and never make it back. Think about the families that have made significant personal and financial sacrifices in support of their child. Let’s give them an experience to remember and to talk about the rest of their lives – our sport deserves that.

Riders Get Tough with Laura Kraut on Final Day of GHM...