Home Blogs Barn Lounge And Then It Rained… 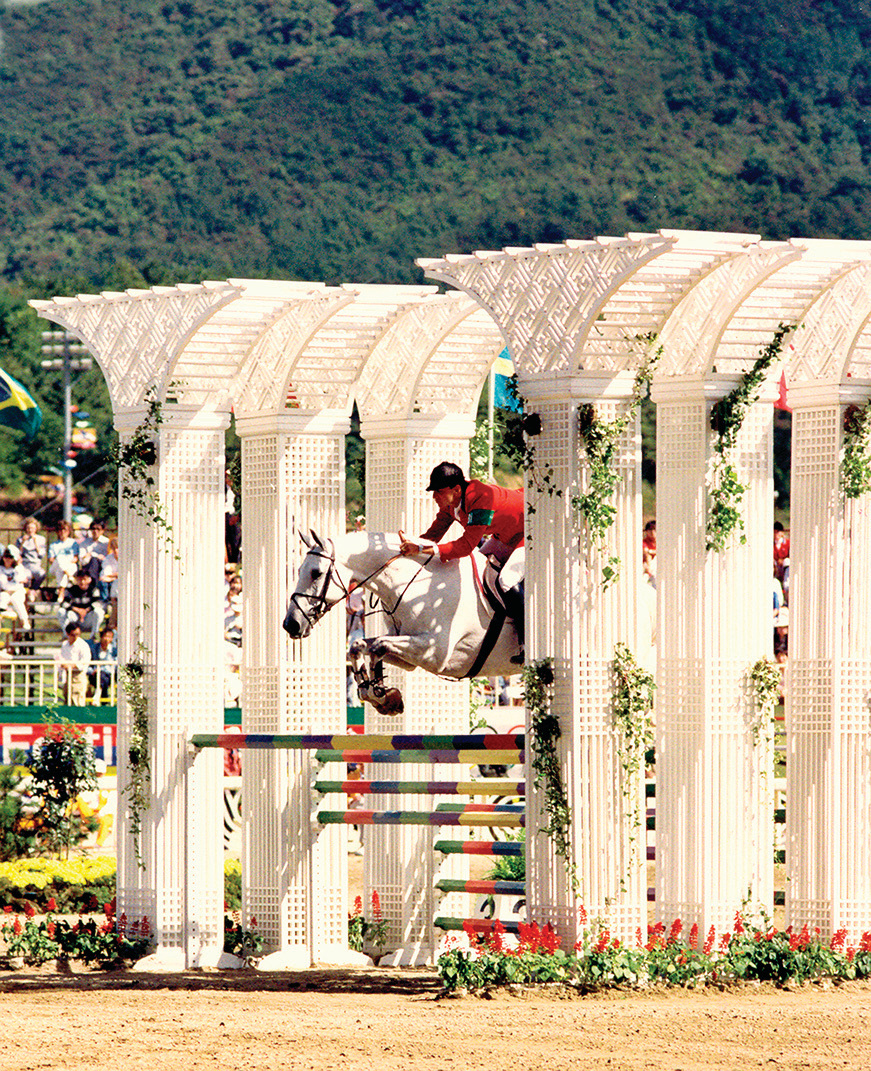 Above: Greg Best and Gem Twist. Photo by Tish Quirk.

Maybe one out of ten 8th grade creative writing papers starts with, “It was a dark and stormy night,” and that over-used opening perfectly describes May 26, 1992 at the Devon Horse Show and Country Fair. A steady rain had turned the Dixon Oval from a ring into a lake. As night pushed day aside and raindrops glistened under the stadium lights, from beneath the Where Champions Meet sign strode the champ of all champs – Gem Twist. Regal and confident, white as snow, with a face that only Munnings could believe, Gem was, as always, ridden by tall and handsome Greg Best, resplendent in the perfectly contrasting scarlet coat of the USET. At that moment, they held the hearts of all Americans – iconic as the best that U.S. Show Jumping had to offer.

Devon was holding the first of its two Olympic Show jumping trials, part of a six class series that would be used as the sole criteria for choosing the U.S. Olympic Team for the games in Barcelona. The class was a nice mix of Olympic veterans like Michael Matz, Lisa Jacquin, Anne Kursinski, and Leslie Howard with a smattering of young guns like future star Laura Kraut. But the clear favorite, the star of the show, and the brightest light in the U.S. team barn was Gem Twist and his long time pilot Greg Best.

Gem Twist was bred, raised, and trained by the legendary Frank Chapot, a veteran of six Olympic Games as a rider and two more as Chef d’Equipe of the team. Gem was considered one of the very best jumpers on the planet and seemed at that moment to be a horse at the top of his game. Gem and Greg had been together for most of the last ten years. “We lived down the road from the Chapots and my mom (Maxine) was determined that Frank was going to be my coach,” remembers Best. By the spring of 1982, Greg was one of the best junior riders in the country. Not from a wealthy family, his early career consisted of catch riding whatever came his way and making the best of each ride. “Mom was really persistent and finally wore Frank down, and I started riding afternoons after school and weekends at Chado Farm. Gem was 2 ½ or 3 at the time and Frank and I both rode him, and later started him over small jumps,” Best recalls. At the time nothing about Gem screamed superstar and the following year while Greg was at University of Pennsylvania, trainer Arlene Orr brought two horses back from Chado Farm for her novice adult rider Michael Golden to try out. Golden chose Gem, then named Icy Twist, and a deal was made. For $12,000, Icy Twist had a new home and eventually a new name.

Fast forward one year, a year of ups and downs and parting company more than a few times, and Golden decided that Gem was a bit too much horse for a career in the Adult Jumper ring. “Arlene and I knew that not only did we have something with talent, but that I better get off of him,” Golden recounts with humor. “We decided to send him back to Frank so he could get the best possible training, and that’s when he and Greg became a team.”

“The thing about the Chado horses was that they had great technique and were very, very careful”, recalls Greg. “Gem started to convince Frank and me that he may be a really good young horse.” The following year, 21 year old Greg and 6 year old Gem Twist had their first big win at the Young Riders Talent Derby (now the USET Talent Search) in Hamilton, MA. “This was their coming out. It was indicative of things to come,” recalls proud owner Golden. 1986 was spent getting miles and winning classes in the tough Intermediate Jumper (today’s 1.40M ). “Rodney Jenkins had Czar and there were a lot of other talented up and comers in every class,” says Greg. “But, we did really well, won a lot”.  By the next winter in Wellington, Chapot decided his young protégés were ready to move up to the big time. They jumped around two Grand Prix’s in Wellington, crossed the state and won one in Tampa, and finished out the winter with a fifth place in the American Invitational against the very toughest beasts of the east. A good spring and early summer earned Greg and Gem a spot on the U.S. Team for the Pan American Games. Heading towards the 1988 Olympic year, the duo had gained international street cred.

After a year of winning at almost every stop, and slicing through the Olympic Trials like a knife through warm butter, Gem and Greg were off to Seoul, South Korea’s 1988 Olympics and their ascent to glory. Team Silver alongside Lisa Jacquin (For The Moment), Anne Kursinski (Starman), and Joe Fargis (Mill Pearl) was followed by Individual Silver with a single downed rail keeping them from the top of the stand. The iconic photo of Greg and Gem Twist jumping the triple bar through the 12 foot white Olympic torch standards became the poster on the bedroom walls of a generation of teenagers.

The years between the 1988 and 1992 Games were spent winning on both the national and international stages. By the winter of 1992, Greg and Gem were ranked #1 in the show jumping world. Coming up to the first two Olympic Trials at Devon, Frank Chapot had chosen to show Gem in only eight classes in order to keep him fresh and sharp for what would be a grueling group of trials.

And then it rained.

1992 marked an abrupt change in the format for Olympic Show Jumping selection. A contentious lawsuit brought by Charles Dolan on behalf of daughter, Debbie, after she was left off both the 1988 Olympic and 1990 World Championship Teams forced the USET to abandon the subjective choice system that had been used successfully for a more objective points- based system. This attempt to increase objectivity and transparency was sorely tested that Olympic year.

Noting the contrast, current U.S. Show Jumping Chef d’Equipe, former Olympian, and 1992 Olympic Trial course designer Robert Ridland remembers that in 1972 and 1976 Chef d’Equipe Bertalan DeNemethy had a selection committee made up of “Bert and whomever he felt like talking to at the time.” For the Gold and Silver Medal teams of 1984 and 1988, chef Frank Chapot used a four person Selection Committee and a series of trials. But the Dolan suit changed everything. Now, there was to be a points- based system stipulating that to be eligible for selection, the horse must complete the first round of of each trial. Simple enough. What could possibly go wrong?

Robert Ridland built a big demanding course in the iconic Dixon Oval befitting the importance of the moment. By the time the first horse walked in, daylight was dwindling to a close, the lights were on, and the ring shimmered under the steady downpour. There was a liverpool- liverpool combination halfway through the course- very close to the out gate. While other horses jumped through it just fine, for Gem Twist and Greg Best it was their Waterloo. Once. Twice. Thrice. They jumped in, and a seemingly disoriented Gem never jumped out. “He just seemed lost in there.” remembers Greg. “He couldn’t tell what was liverpool and what was rainwater. I think it all looked like one big lake.” Linda Sheridan, who for eight years was Gem’s groom, says, “The thing about Gem was he never ever stopped, never had a water problem. And then, for one awful moment, he had both.” And suddenly, it was over. To the stunned disbelief of Greg Best, Frank Chapot, Linda Sheridan, Robert Ridland, and 10,000 drenched fans in the stands, the beautiful gray horse and his talented rider walked out of the Dixon Oval and Olympic contention. You could have heard a pin drop.

Even though the rules forbade Gem Twist from making the U.S. Team, he was still allowed to compete in the trials. Two days later at Devon, Gem and Greg won. To underscore the foolishness of the points- only system, they won again in Gladstone. But no matter how much the show jumping world wanted Gem and Greg to represent the U.S. in the Olympics, the best horse and rider combo in the world, the rules were firm and the deal was done.

For Greg Best that lonely, quiet walk from the ring in the rain was just the start of a really bad year that would forever change the course of his life. Two months later, his mother Maxine, the person whose dedication and doggedness made all good things possible, died of brain cancer. Then in September, back in the very same Dixon Oval, Greg had a horrendous fall that shattered his shoulder, tore his rotator cuff, and ultimately ended his partnership with Gem Twist. From the pinnacle of success and achievement to the cellar of pain and loss, the young superstar reeled from the events of 1992.

Needing a change of scenery, Greg moved to Florida that winter and, staring his thirtieth birthday in the eye, tried to figure out the direction of his life. Recalling the memory of a long ago competition trip made with old friend Louie Jacobs to New Zealand, Greg followed his heart and went west ‘til he was east. In New Zealand, he began to recover physically and psychologically. “For the first two years, I was a farmhand,” he explained.  After a while, he eased back into showing and then teaching and finally a clinic schedule that brought him back to his native land. He has been Chef d’Equipe for the New Zealand Olympic Show Jumping Team, and now spends part of the year in bucolic Wellesley, MA, where he is the new coach of the Dana Hall School riding program. Another journey, another challenge. With wife Kim and young children, Will and Pippa, he spends some of the year here enjoying his homeland and some in New Zealand.

The man he made himself into is the man he brings back all these decades later. But, surely his younger life is still there- somewhere back in the shadows of a not so distant memory. As Robert Ridland said when remembering that one bad night so long ago, “ The worst possible moment just illustrates the contrast to an amazing career. For so long, Gem Twist and Greg were the very best we had. One bad class can’t take that away.”  It was a dark and stormy night in an otherwise luminous career.

This piece originally appeared in the December 2017/January 2018 print edition of The Plaid Horse.