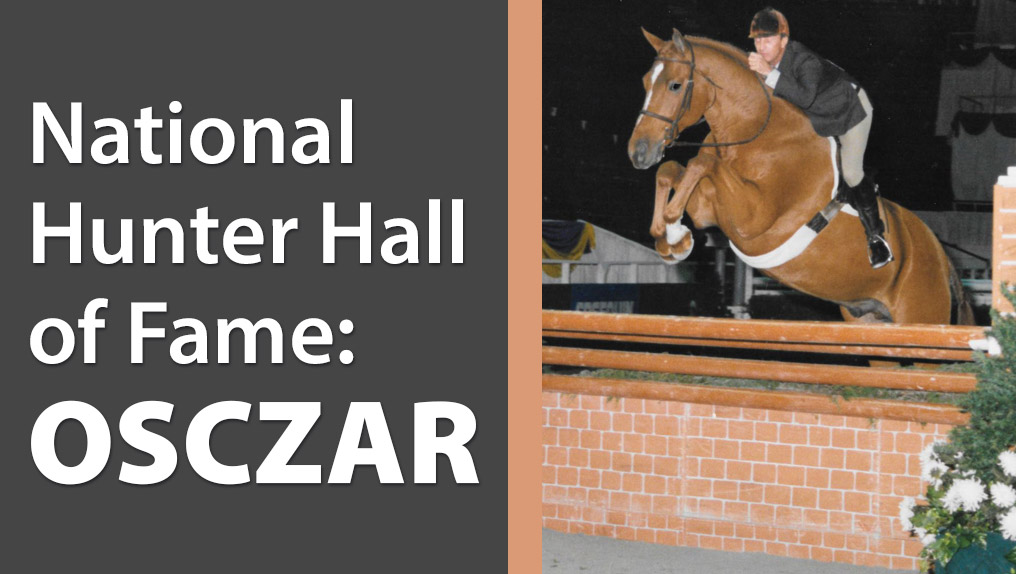 In the 1976 Olympic Games in Montreal, Canada, gymnast Nadia Comaneci scored a perfect 10. Her performance left the crowd hushed and spellbound. The scoreboard was not programmed for a perfect score, so it showed a 1.0. Confused onlookers were silent until they realized what had happened, and the roof was raised with applause.

In 1997, a handsome 17.0 hand chestnut gelding named Osczar entered the ring at the Capital Challenge Horse Show in Upper Marlboro, Maryland. The crowd was stunned and silent as he jumped around the course flawlessly. Elegant across the ground, consistent in cadence and pace, Osczar jumped each four -foot obstacle with ease. High belly, round back, legs perfectly folded and even, he loped around the course with his ears up and a pleasurable expression on his face. All eyes were on the scoreboard; not to see if he had won, but to see how high a score he would receive. Not only did Osczar and rider Rick Fancher post the first perfect score of 100 ever given, they received a standing ovation from the panel of judges.

In both cases, the judges defined the performance as perfection. Is there such a thing? While all humans are flawed, all athletic performances are not. It is possible to fulfill every requirement of an athletic performance, although it is very rare. In gymnastics, the scoring has been changed to make a perfect score statistically impossible. In the hunter discipline, there have only been two perfect scores awarded in 25 years of scoring: Osczar in 1997 and In Disguise and Shachine Belle in 2003.

Rider and trainer Rick Fancher first saw Osczar near his farm in Prospect, KY, as a two year old. At 17.0 hands, Fancher described him as “gigantic.” His breeder, Maureen Martin, brought the just broken horse over for Fancher to ride. From his first moments astride, the Kentucky horseman knew that this big, chestnut colt was something special. Despite his age and size, he had a natural balance, agility, and a perfect lead change. As Fancher remembers, “He always had a push from behind and floated in front. I cantered across the ring and turned his head and he just swapped his lead. He jumped his first crossrail beautifully, and jumped every jump afterward just the same. He was a natural.”

Osczar was sold to Ted Wright, a local trainer, who took his time with the horse. Wright spent a lot of time at local shows with the big colt, allowing him to progress slowly and at his own pace. In 1993, Fancher rode Osczar to victory in the Four Year Old division of the International Hunter Futurity Championships. With a prescient glimpse into the future, Fancher sold him to client, Dawn Fogel, as her future Amateur Owner Hunter. The die was cast for what was to become one of the most successful horses in the history of show hunters in both the professional and Amateur Owner divisions.

With Fancher in the Green Conformation and Regular Working divisions and Fogel in the Amateur Owner division, Osczar was a consummate winner. Fancher prides himself on taking his time with the talented horse, allowing him to develop without the pressure of winning. Osczar earned Championship honors at every major horse show on the East Coast: Devon, Pennsylvania National, Washington International, Capital Challenge, Winter Equestrian Festival, and the National Horse Show. As Fancher states, “He had many fans, most of whom were his competitors. People who knew what they were looking at knew how good he was.” He was a horse that people would go to the rail of the ring to watch; he was that impressive.

For all of his successes, Osczar may always be best remembered for his perfect score on that day in October,1997. Fancher remembers being “dumbstruck” when the number 100 was flashed on the scoreboard. “I knew he jumped out of his skin, and I thought he would win. But, I never expected a perfect score. If a horse ever deserved that recognition, it would be him.”

Osczar retired from the professional divisions in 1997 and from the Amateur Owner division in 2002. He lived out his days on his home turf in Prospect, KY, and died in 2015. Fancher calls him, “a gift… the horse of a lifetime.” The hunter world calls him one of the best that ever was.

Where to Check US Online Casino License: Everything You Need to...