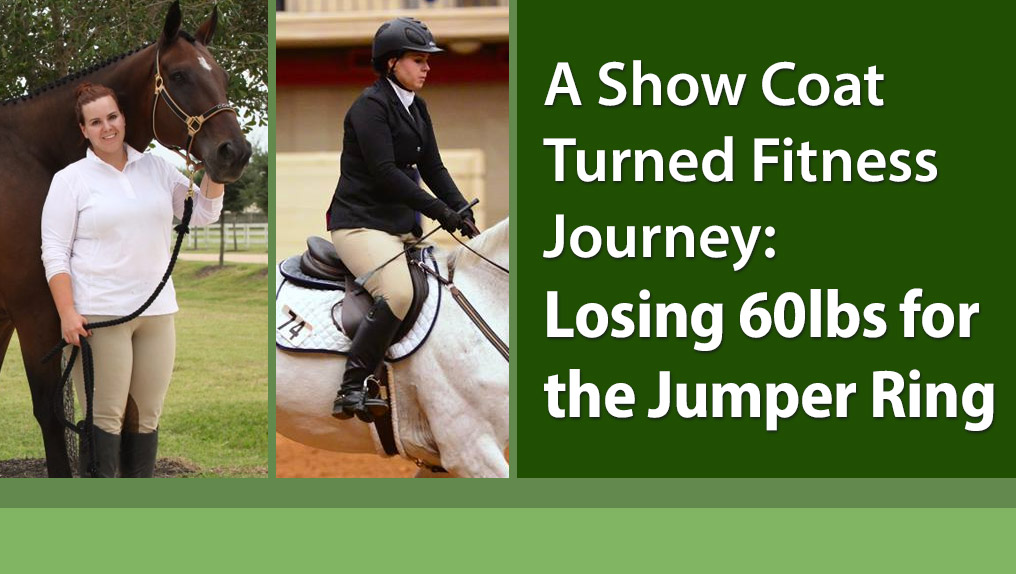 Though it’s something many riders struggle with, weight isn’t often talked about in the hunter/jumper world. There is a silent pressure to adhere to “Eq Diets” and be the tall, slim riders we often see at the top levels. Plus, any person who’s ever battled with a few extra pounds can never forget the infamous quote attributed to George Morris, “The best exercise for your riding? Put down your fork.” But fitness, body image and weight are important aspects of this sport.

As a working adult amateur in Texas, Alie found herself in a situation familiar to many, after always having been on the heavier side, she started showing carrying more weight than she wanted. “I was up there,” she said. “Enough that I had to peruse a few different sites before I could find a coat in my size (Shoutout to SmartPak and FITS for their extended sizing).”

At her heaviest weight, Alie believed the extra pounds were holding her back from jumping bigger fences and believing she could advance in the show ring. “I was cognizant of the fact that I was much heavier than the other riders in the Hunter ring, but I never felt like I placed lower because of my weight,” she said. For Alie, a competitive and goal driven equestrian, being overweight wasn’t something that held her back from riding in general, but rather blocked her mentally and physically from moving up in the show ring. Still, the catalyst for real change didn’t happen until she went shopping for a show coat.

“When I switched from hunters to jumpers, I wanted to buy all the ‘fun’ Jumper gear with bling – show coats with crystals, cool shirts to wear in training classes, stuff like that,” Alie explained. “I remember being at a show and going to a retailer wanting to try on Equiline coats – and the only one that fit was a men’s jacket. It was at that point I was like, something needs to change.” The ordeal embarrassed Alie, and forced her to take a harder look at her weight. “My drive to get fitter came from a place of vanity rather than poor performance—I came home from that show and immediately bought a pair of running shoes and started doing Couch to 5k,” she said.

Through the Couch to 5k and calorie tracking apps, Alie began a conscious effort to change. “At first I was way too nervous that people would laugh at me walk/jogging on the street, so I stayed in my neighborhood and ran the same small loop over and over,” she said. As the weeks passed, she grew more confident and started running longer distances in different locations. Over the course of months, Alie’s breeches started fitting looser and she could see a difference in what she looked like in riding videos.  Her hard work led to a sixty-pound weight loss in the course of a year.

For Alie, losing weight helped her feel more confident about belonging in the jumper ring as well as adjusting to a different riding style with her new horse. “My gelding likes me to sit deeper in the saddle,” she explained. “When I was heavier, I never wanted to sit the canter – I felt like I was hurting the horse with all that weight in the saddle. Now I feel that I can sit the canter to the fences and it’s not going to cause my horse pain or discomfort.”

In the aftermath of her fitness journey, Alie enjoys feeling more confident about her body in the jumper ring, even though building and maintaining this confidence is a work in progress. She can now shop through various bedazzled, European show coats as she wants, but she remembers what the other side felt like. “I think if everyone is more honest about the shared struggles all equestrians face, the amount of shaming – about weight, ability, or anything else – will hopefully start to decline,” she said.

Alie wants riders of all sizes to avoid conflating body image with weight loss. “You can be a heavier rider, and have every bit of the talent that a thinner rider does. In fact, I’ve recently gained back almost 15 pounds but am riding better than I ever have, including times when I was a lower number on the scale,” she said.

Weight and fitness is an individual journey, both within our sport and outside of it. “Your worth and riding ability isn’t determined by your weight, but by the amount of determination you have in yourself,” Alie said. She believes that if losing weight is something a person needs or wants to do to perform at a higher level, then there’s nothing holding them back from tackling that goal. “If you’re riding great at a heavier weight and your horse is fit and happy, that’s totally okay too!” she added.

Even if we can’t forget the dreaded fork quote, or feel pressure to have the same body type as the teens winning in the equitation ring, the most important thing is to be honest and true to yourself. Alie’s journey might not look like yours, but that’s okay. All of us run different marathons, some literal and some metaphorical, but being transparent about our struggles and successes will build a stronger platform to discuss important topics. It’s better to discuss the things that make us uncomfortable, including weight, than it is to feel alone.