Home Blogs Barn Lounge How to Train the Adult Amateur (and the kid of the Adult... 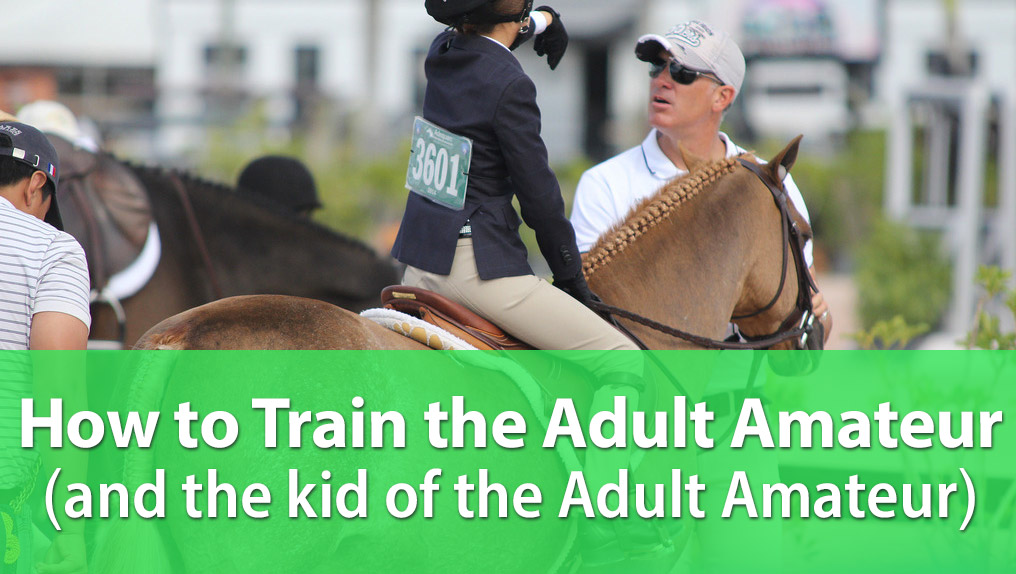 The trainer/client dynamic is, well, complicated. To the outsider (for example, my husband), the client is the customer and we all know that the customer is always right. Therefore, the trainer should do what the customer says. Which sounds great in theory, but if you just want someone to agree with you, you could save yourself a ton of money and just buy yourself a recording of someone saying, “You’re the best! Keep it up!” What we want and need from our trainer is someone who can correct our mistakes, help navigate challenges, and believe in us enough to make us believe in ourselves.

In the past year, I found myself in unfamiliar territory. I have never left a trainer until this year. Ever. In 40 years. My childhood trainer moved away when I was in college. For a long time after college, I just rode for fun. It wasn’t until my oldest child started lessons that I really started riding, like REALLY riding, again. By then, the student/teacher relationship had shifted somehow.

When I was a kid, my trainer was like some combination of a teacher, mother, cool older sister, and friend. I spent many, many nights at her house before shows. I watched her son while she taught another lesson. She carted me all over the place to try horses out for clients, or to eat dinner after a lesson, even to look at colleges when it was time for that. She let me ask a million questions, and asked me to think about what I thought the answer was, before she told me her thoughts. She exposed me to so many programs and ways of thinking about every aspect of the industry, from feed to race horses, and I learned every minute I was with her… even if I didn’t realize it.

When it came to the horses, she was all business. Literally, when she said “jump,” I said “how high.” If she said your pony’s mane needs pulling, you better believe I did it – and fast. It was never a fear-based listening, but she was the boss and I knew it and respected it (and in all fairness, she was usually right). The adult was in charge and told me what to do, and I did it — as it should be. If she told me I could go jump that jump, I believed I could do it. Because she had confidence in me, there was no room for doubt.

By the time I was “shopping” for a trainer again, it was more important to me to find the right program for my child. Whatever that ended up being, would have to work for me too.

Luckily, a barn I was very familiar with that took impeccable care of the horses at a convenient location to our house had a lesson program. That worked for us, and we stayed, adding several ponies along the way as I watched the child grow into a decent little rider and (mostly) kept my amateur nerves in check.

Though things at the barn were the same they had always been, I had changed. For one thing, I grew up. The appeal of being told what to do “Because I said so” had worn off. Once fearless, I found the thought of a 3’ oxer terrifying (the ground has gotten harder, as I’ve gotten older for sure!). But more importantly, I had enough knowledge and experience to not accept everything as it was.

“That’s the way we do it” wasn’t enough of a reason for me, even though I’m fully aware that I don’t know everything. For the first time in my riding career, I needed someone to discuss and explain things to me. I was no longer the ten-year-old kid who would blindly follow.

I will be the first to admit, that it has to be REALLY hard to deal with an experienced, adult client who is also the mother of another client. Especially when you factor in that most of the parents trainers deal with, are not horse savvy. Those parents often blindly follow the trainer, because they have no other option. If you don’t know any better and trainer says “This brand is the only brand of fly spray worth using,” what else will you do, except buy that fly spray?

If you’ve never shopped for a pony before, you don’t know what to look for, and don’t happen to know lots of trainers in your area, you have no option but to do what the trainer says. But, it can get tricky when a client like me knows some people, and has some of the same knowledge and experience.

Time has a way of exposing weaknesses in any relationship. The first disagreement I had with the trainer involved my child and a bit. The child’s otherwise saintly pony liked to root, yanking the reins out of the child’s (who was maybe 40 lbs soaking wet) hands. At home, we fixed the problem with grazing reins since super smart pony never tried this with strong adults. But at shows, it was a problem. I wanted to change the bit from a french link to a slow twist so the child could get a little bit more leverage, but was told firmly “No.” No explanation. Had the trainer said, “I think we should try X, Y, and Z first, because…” we could have had a productive conversation and reached a decision together, but she wasn’t willing to discuss it further.

Issues like this continued for years: I wasn’t allowed to communicate with the owner of a leased pony myself (who I knew quite well), I wasn’t allowed to school my own pony at shows, and I wasn’t given the opportunity to figure out on my own what worked for me and what didn’t. When we finally did leave, it was because the child was no longer thriving in the situation.

Now we have a new trainer who has a very different way of teaching that is working very well for both of us. She asks and observes, and then asks what went wrong or right. Our first show with the new trainer, she told me to find my own path through a crowded schooling ring, and I froze. After years of going back to the ten-year-old kid that followed blindly, I realized I was actually incapable of making a decision on my pony, by myself. I had lost all confidence in my abilities because for so long, I was discouraged to think for myself.

These days, I’m finding my way back to the confident rider I used to be. It’s taken some time, some falls, lots of mistakes, but I know my new trainer believes in me enough for both of us, even when I don’t act like it. I know my child has grown in leaps and bounds since making the switch. She too, stumbles when asked what she thinks (old habits die hard), but is learning to think about a given situation and recognize what she can do to change it.

I recognize that us mom/pony mom/ammy’s are a hard group to teach, but I think I can speak for many of us when I say what it is we are looking for:

We want a trainer who will push us out of of comfort zone, not because that is what is next on the list of “what we do,” but because they know we are capable of doing more.

We want a friend who will listen while we vent, and believe us when we talk about how good we used to be, but then tell us to “buck up and get back on and try again,” when we feel discouraged.

We want you to recognize improvements, even when they aren’t huge improvements – we’ve had LOTS of time to create bad habits and they are hard to break.

For our kids, we want you to treat them like we do – demand hard work and respect, but encourage them to question methods, engage in conversations, and to really think about their role as a rider. I want my child to look back on her days with her childhood trainer and remember how she took the time to explain why “inside leg to outside rein” works, or how a Pelham functions.

Most of all, we want you to know that in our minds, we are still the fearless kid who can still do all the same things we could before. So when reality comes up to bite us, or fear appears out of nowhere, it genuinely catches us off guard.

We have survived decades in the horse world, even if we aren’t an easy group of people to deal with. But if we have chosen you to be trusted with our horses and our children, then that’s a pretty big deal. You know how to do your job better than we do, but also realize that sometimes we know our children better than you.

Ask our opinions, and we’ll talk about options. Maybe we end up with your plan. Maybe we find a new idea in discussing it. Maybe we say ‘forget it’ and go grab a margarita, but include us in the process, and then fuss at the child if she didn’t clean her tack.

Life is too short, and this sport is too expensive, to not feel included in the conversation and respected by your trainer.

From a Wheelchair to the World Equestrian Center: An Average Equestrian’s...