Home Blogs Barn Lounge That Time I Had a Temper Tantrum at the Horse Show as... 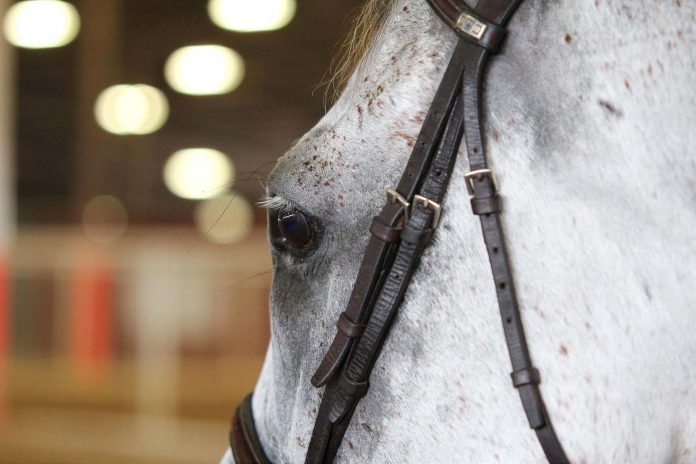 Winning isn’t everything, but wanting to win is. -Vince Lombardi

Here is the truth, I am competitive. Mostly with myself. I like to win. I mean, why else would I be willing to pay obscene amounts of money for someone to judge me against other people? I am a smart enough person, to know that sometimes it is a far bigger victory to accomplish a goal, than it is to win a blue ribbon. But I also know myself well enough to know that I really like to win. And I think all of us that go to shows, want to win on some level. We want the confirmation that we are doing everything right.

The mom side of me is able to separate winning and showing. Honestly, I don’t care if the child never wins another ribbon her whole life, as long as SHE is ok with that. But I know my kid, and I know nothing motivates her to work harder than going to a show and not placing well. Her desire to go home with an armload of ribbons is strong enough to push her to ride without stirrups at home, to find time to hack one extra day, and overall make the extra effort.

In my house we have only 2 rules: try your best, and be kind. That’s all I ever ask. Sometimes it takes a lousy horse show for her to realize she was trying, but not trying her best — and I think that’s a pretty great lesson.

We are very fortunate that our local show circuits are plentiful, competitive, and very well attended. At a show last month, there were 25 kids in the short stirrup… that’s crazy! They combined the pre-childrens with the pre-adults, and we had 30 in that division — and a competitive 30 at that! In both divisions, that meant a mistake, even a relatively minor mistake, put you pretty much out of the ribbons. It’s unfortunate, but it’s the way it is.

My pony is still green (getting less green daily) and the last time we were in a large flat class, he came unglued and kind of lost his marbles…so much so that I scrapped the rest of his classes that day. So, as we were going into the insanely full hack, I was really just hoping he didn’t try and kill me or someone else in the ring. But he was awesome! Total rockstar, and finished 3rd.

Over fences, he did great too. Maybe missed a lead change here or there, or got a little deeper than I’d like to a fence or two, but overall I was really pleased with his efforts and with my own riding. I fixed a big struggle I’ve been having with my riding, and he was a good baby! Sounds lovely, right? Except I wouldn’t be sharing this with you all if there wasn’t more to it.

It took about a million hours for all 30 entries to jump 3-4 trips each, and when they finally pinned the classes, we only placed in one over fences. And… I was ticked off.

I was angry at myself, but not because of how we did compared to everyone else. I was mad because, before they announced the results, I was pretty pleased with him and myself. But when I heard how we placed, it changed how I felt about my riding. Suddenly, I was disappointed I didn’t work harder for that lead change, or kept my pace in the corners so we found the fences better. Suddenly, what was progress earlier was defeat now, and I was so mad at myself for feeling that way.

Which led to a full on what-am-I-doing-this-for-at-40-years-old moment. Why am I paying someone to judge me, and then changing how I feel about myself, based on their opinions that I asked them to give? Why was I angry when really we did make good progress. Why even bother showing if that’s how I feel at the end of the day? And truly, I didn’t want to show again the next day.

After being talked off the ledge by my trainer (who should probably be given an honorary degree in psychology at this point), I agreed to give it another go the next day. To go in and fix the mistakes from the first day…focus on staying straight and keeping the pace. Flats went quite well again (I mean not the eq…I’m never going to do well in an eq on the flat) and honestly we laid down some of the best trips we’ve ever had, in the history of ever, over fences.

I smiled the whole time and it was FUN. It was fun, because it truly was our best effort. When it was time to announce the ribbons, I didn’t listen. It didn’t matter. There was nothing I could have, or should have, done differently (my child, however, did go listen and that little baby pony of mine took home a second and third…out of 30!).

Had I placed better the first day in a smaller class where mediocre might have been acceptable with an arm full of ribbons and content feeling about my riding, I wouldn’t have tried harder the next day. And it was that next day when the lightbulb really came on (and has stayed consistent since then, amazingly). It took getting mad at myself for caring what someone else thought, to make myself better and try harder.

That’s why I pay obscene amounts of money for someone to judge me, because it makes me realize that I can do better and try harder. It’s easy to get complacent and stop trying to improve.

It would be easier (and a whole lot less expensive!) to not show, but I honestly don’t think we would improve as quickly. And I definitely would not have the opportunity to process my self-reflection in as timely a manner. I needed to have my little temper tantrum, to find my best self and my best effort. And THAT is worth more than a blue ribbon.

Five Ways to Support Your Fellow Equestrians During COVID-19