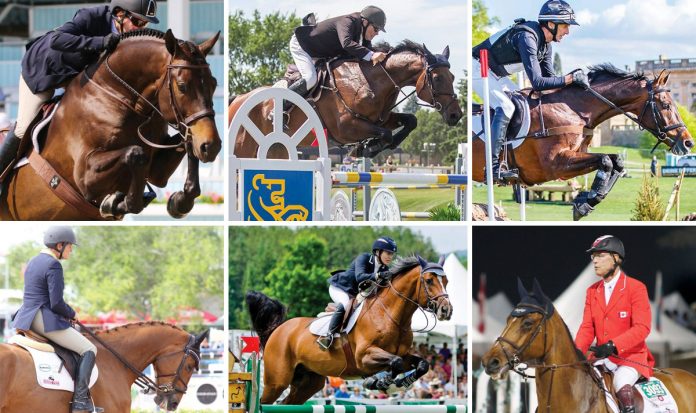 As a birthday milestone looms on the horizon like a noose from a gnarled tree, I look around our world for inspiration. Is there life after 60 or should I waddle off to a world of sedentary observation?

For most, the arc of riding skill descends as we begin to age, each reaching our peak at a different point. Injury, physical wear and tear, changes in attitude all contribute to the decision to hand off the reins to a younger rider. And then, there are the few for whom the wave does not crest and crash to the beach, the few for whom age does not impede ability, the few who continue to dominate their fields into their seventh and eighth decade. Read about these six riders over the age of sixty who continue to perform at the top of their sport…

Louise may claim that she is slowing down, but the evidence has yet to present itself. At the top of her riding game, she bested a field of elite hunters at the 2018 Winter Equestrian festival in Wellington, FL, to win the prestigious $100,000 WCHR Peter Wetherill Hunter Classic. Recent Serio winners include Rock Harbor, El Primero, and First Look. They are additions to an illustrious roster: Gray Slipper, Red Panda, Irresistible, Rock On, Rock Star, and Dream Date, to name a few.

With a rock solid training and sales business in Derbydown, Inc., Serio has plenty of opportunity outside of the saddle. Why does she still ride with focus and ferocity? “I am a competitive person. It is also my job to produce good rounds. Mostly, I love the feeling of bringing a good horse along and having success. It is an honor to work with these animals.”

Hugh Graham won four Grand Prix events in the summer of 2018 at the age of 68. When asked about his motivation to continue riding into his seventh decade, he responded with humor. “Well, what the hell else am I going to do? I don’t know how to do anything else.” While Graham makes light of his career options, he takes his work as a rider very seriously. “I practice my skills every single day,” he says earnestly. “I don’t jump much, but I practice turns and galloping every day.”

Graham has had (and continues to have) a stellar career. He is a horseman in every pore of his skin. From his 1963 Calf Roper of the Year Award at age 14 to a Championship at The Royal Winter Fair at 21 years old, two years after taking up showjumping, to training the winner of the iconic Queen’s Plate flat race, Graham knows horses. He has reached the pinnacle of success in many equestrian fields, and he may be out in the ring practicing his craft as this very minute.

Some readers may be thinking, Mark Todd? This is a hunter/jumper magazine. True. However, there can be no discussion of success and longetivity without including Mark Todd. In 1978, he represented his native New Zealand on the first world championship team ever fielded by the small country. In 2018, forty years later, he is still a contender to be reckoned with at major competitions throughout the world.

Todd won the Badminton Horse Trails three times and earned an Olympic Bronze Medal at the Sydney, Australia Games in 2000. After the Olympics, he decided it was time to retire and walked away from the sport. Todd developed success training racehorses in New Zealand, but the itch to ride again led him back to eventing. He announced his return to the sport six months before the 2008 Hong Kong Olympics and his intent to make the team. In a 2017 interview with The Telegraph, Todd explains. “I never thought I’d come back full time. It was just a bit of a dare to see if I could make it back to the Olympics in six months.”

Todd made the team after qualifying in his eighth event in eight years. While Hong Kong was not the fairytale comeback he had hoped for, he continued to press on to the 2012 London Olympics where he won Team Bronze. Again at the top of his game, Todd earned a place on the 2016 Olympic Team bound for Rio de Janeiro where New Zealand finished fifth in team competition and Todd finished seventh individually.

In 2018, at the age of 63, Mark Todd will represent his country in Tryon, NC, at the World Equestrian Games (appearance #6). In addition, he has his sights firmly on the 2020 Tokyo Olympic Games where he would compete at the age of 65. “You are only as old as the horse you are riding,” he claims.

Career Highlights:
• Competed in more Olympic Games (10) than any athlete in history, in any sport
• Olympic Team Silver in the 2008 Beijing Olympic Games at age 61
• First rider in show jumping to win back-to-back World Cup Finals: 1988 in Gothenburg and 1989 in Tampa, both aboard Big Ben
• Nine medals (including two individual Golds) in nine Pan American Games, more than any other show jumper in history
• Twelve-time Canadian National Champion
• Two-time winner of the $1 Million CN International Grand Prix at Spruce Meadows
• Canadian Showjumping Hall of Fame Inductee

Ian Millar is known throughout equestrian sport as Captain Canada. Over a period of forty years (forty!), Millar competed on 10 Olympic Teams, making him the longest-competing athlete at Olympic Games by total Olympic appearances. He has medaled in the Olympics, the Pan American Games, competed in the World Equestrian Games. In 1988 and 1989, Millar and legendary partner Big Ben became the first-ever horse and rider combination to win back-to-back World Cup Finals.

Big Ben is to Canada what Secretariat is to the United States. The 17.3 hand liver chestnut was the heartthrob of a nation and thousands turned out to see him in his farewell tour across Canada.

While Millar will forever be linked to Big Ben, he is by no means a one horse wonder. The Canadian has had numerous successful international Grand Prix horses including Ivar, Star Power, In Style, Baranus, and Dixson. Most recently aboard Dixson, Millar as part of Team Canada bested an uber competitive field to win the $450,000 Longines FEI Nations Cup of the United States in Ocala, FL. Captain Canada continues at the helm of Canadian showjumping.

Leslie is a shining example of the success of the American system. Raised in New Jersey, she came from a family who had no history with horses. But Leslie found her way to a nearby barn and has never looked back. She was a catch rider for the extremely successful pony and hunter barn, Highfields Farm, cutting her teeth by riding any mount offered. At the age of 14, she began to train with George Morris, and at 15, she won the Maclay Finals.

Leslie aged out of the junior and right in to the professional ranks. Her career has been long and prodigious as has her influence on other professional and amateur riders. Her love of teaching is reflected in the impressive list of those she has mentored. Kent Farrington, Molly Ashe Cawley, Christine Tribble McCrea, Judy Garofalo Torres, Nicole Shahinian Simpson, Lisa Jacquin, Marley Goodman, Mary Shirley, and Debbie Dolan Sweeney are a few. As fit as ever, Leslie’s determined visage and steely look continue to be her trademark. At 5’1″, Margie Goldstein Engle is diminutive in height only. She has the command of a giant astride a horse and no one who has seen her ride doubts her herculean strength. When asked if it is difficult to be a small rider on a big, strong horse such as Royce or the 18 hands tall Dicas, she replied, “No matter your size, if you get into a muscle fight with a horse, the horse is going to win. You have to get your horses on your side through finesse, communication, and body language. You have to get them wanting to ride nicely for you.”

Margie celebrated her 60th birthday with a win in the most difficult Grand Prix at the Winter Equestrian Festival, the $500,000 Rolex Grand Prix. She is a contender for the 2018 World Equestrian Games and, no doubt, has her eyes on the 2020 Olympics.

Six riders over the age of 60 still riding victory gallops. As I prepare to stare the next decade firmly in the eye, I will not flinch. I will continue to CrossFit, Orange Theory, run, gym, and Soul Cycle until I cannot do it anymore, so that I can step into the stirrup, swing my leg over, and feel the same joy in the saddle that I have felt my entire life.