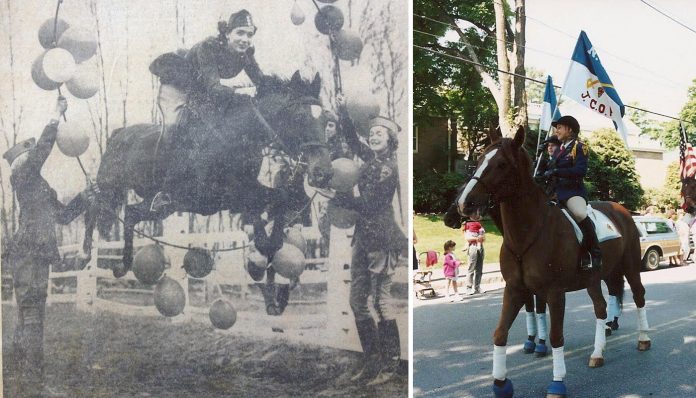 These days, there is a lot of criticism stating that proper horsemanship has fallen to the wayside in favor of more hours in the saddle. We’ve all known riders who are incredibly talented in the ring, but struggle with basic ground skills. How do we ensure that the future leaders of our sport grow up to be well rounded, competent horse-people and keep the tradition of the sport alive? One barn located in New Canaan, Connecticut might be able to provide an answer.

New Canaan Mounted Troop or NCMT, affectionately dubbed Troop, was founded in 1939 by Margaret Cabell Self as the fourth branch of the Junior Cavalry of America. Self was an avid equestrian, educator and author. She published more than 40 books within her lifetime, many of them about proper horsemanship. Believing that money should never be a barrier to pursuing a love of horses, all of the horses were shared among her students from the beginning. Everyone wore the same uniform, and students worked in the barn to keep costs down.

Discipline and compassion were paramount, both in the barn and in the community. Many of Self’s books contain stories of young “Troopers” trudging through several feet of snow to feed morning grain during a harsh winter or organizing circuses to raise money for war orphans in the community. Described as “scouts on horseback,” Troop was a place to develop the whole person and learn life lessons both in and out of the saddle.

79 years later, NCMT is still standing tall. There have been some surface changes; a beautiful new 30 stall barn was built in 2009, and uniforms are now only required for special occasions. At its core, however, Troop is still striving for the same values Self embodied.

Troop is now a 501(c)(3) nonprofit organization, whose mission is to “build leadership, responsibility and confidence in youth through sound horsemanship and enriching the lives of individuals with special needs through equine assisted activities.” The full horsemanship program currently has over a hundred Troopers age 7-17, and the therapeutic program known as Super Troopers, serves approximately 125 individuals with disabilities. Everyone of NCMT’s equine herd was donated to the program, some stepping down from competitive show careers, others coming from racetracks and carriage barns. As before, Troopers are required to spend a weekly “barn day” completing barn chores and caring for the horses in addition to riding. The idea of “horsemanship from the ground up” is poured into every aspect of the program.

As the last remaining branch of the Junior Cavalry of America, Troop maintains many military traditions such as rank. Each Trooper, no matter how old they are, begins their experience as an inductee. In order to progress to Cadet, they must recite this maxim:

I pledge myself to be kind to animals, to be a sportsperson, win or lose, to be courteous and obedient to my officers, to work and play with my fellow cadets as I would have them work and play with me, to hold honor, troop, and courage in high regard.

As their horsemanship skills grow, they are promoted from Cadet to Corporal, Sergeant, 2nd Lieutenant, 1st Lieutenant, Captain, and one yearly election is held for the leader of the Troop, Cadet Major. The higher a student’s rank, the greater their responsibilities. Barn Days are run by high ranking Troopers as they teach younger Cadets how to hay, water, feed, sweep, do laundry, perform basic veterinary care and more. The highest-ranking officer on each Barn Day is responsible for assigning chores and ensuring that all of the horses are properly taken care of for the day. In addition to barn chores, Barn Day also includes a half-hour lecture on topics such as breeds, anatomy, types of bits, and common diseases to name a few.

The role of officers goes beyond Barn Day. The Troop Leadership Council, comprised of high school aged officers and lead by the Cadet Major, organizes fundraisers and social events throughout the year such as the yearly Halloween Parade and Carnival, and the descendant of Margaret Self’s circus for war orphans. They participate in community events, such as marching in formation in New Canaan’s Memorial Day Parade. Each spring, the officers form a mounted Drill Team and perform a pattern of their own design. Margaret Cabell Self’s mission to create well rounded leaders and horse people is alive and well.

Troop is a unique program, in many ways the only one left of its kind although it shouldn’t be. There are many uneducated or undereducated young riders competing across all levels of competition. Traditionalists express anxiety over what that means for our sport. However, by accusing these riders of being lazy and disinterested, we do a great disservice to all the hard work they put into the ring and lose an opportunity to redirect that energy into the barn.

Instead, let’s develop more ways to actively provide that education to every rider, from walk trotters to high junior jumpers. Let’s create more lesson programs that are structured around all aspects of horsemanship and allow this cohort of young riders to grow, apply their knowledge, and pass it on to the next generation. NCMT has nearly 80 years of history and may be the way to a better future for our sport.