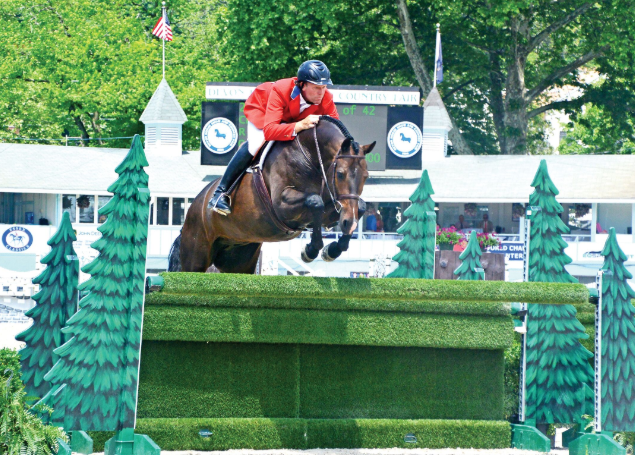 I’ve been riding all my life. I started when I was 7 years old. I would braid my pony and load him on the trailer in the morning. Then I’d go up to the house and wake my parents with the question: “Please, will you take me to a horse show?” Even then, I was a very passionate rider.

By the time I was 15, I was riding full-time, missing a lot of school, going to horse shows every weekend and spending the whole summer riding. At 16, I won the Maclay Finals at Madison Square Garden, and riding sort of took over everything I did. I think my parents were a little bit concerned that this was all I was doing.

At the time, I was attending a good small high school. As a junior I told my advisor that I wasn’t going to college because I was going to be a professional horse person. I planned on riding for the rest of my life and felt pretty strongly about it. Then during the second semester of my senior year – when all students had the opportunity to do an apprenticeship in a profession that interested them – I arranged to spend the three months in Florida, riding and showing. I lived the life, day in and day out. When I returned to school for the month of May to finish the year and graduate, I realized I didn’t know many of my classmates and they didn’t know who I was either. I thought to myself, I’m really missing out on a lot. I decided I wanted to attend college. My parents were willing to pay for me to go to school. I was certain I was going to ride every day of the rest of my life, but I also knew it would be really foolish for me to pass up the opportunity to go to a good university.

When it was time to start college (I attended Tufts University just outside of Boston), I said to myself, No more leaving every Thursday and going to a horse show during school. I had two horses, and instead of playing a sport while I was in school, I would ride – only ride. I would not allow myself to show except during the summer when we were on break, and then I showed as an Amateur.

I went to all my classes – I don’t think I missed one. I got involved in as many different club activities as I could and I met some of the most fascinating people in my life. Many are still friends. I try to keep that connection with people who have nothing to do with horses because it is interesting, and life is too short to be focused on only one thing.

The day after I graduated, I opened a business. I got a small stable, and I’ve been a horse professional ever since. But I am so happy and so thankful that I made the decision to go to a university and be exposed to a variety of things. It was so much different than my high school experience, which was very narrow-minded. I encourage everyone to go to a university if you have the opportunity. You can pursue a degree in a traditional subject like liberal arts or science or whatever. (I studied history and sociology, which had nothing to do with horses.) It’s also possible now to take courses in whatever horse-related area interests you: marketing, business and public relations to name just a few. Plus, there are some fantastic universities that have great riding programs.

During my time at Tufts University I was a member of their Equestrian Team and participated in the IHSA program. I won the Cacchione Cup when I was a Sophomore. It was a great experience being on the Tufts team – I had a lot of fun and met some fantastic people from all levels of riding.

The equestrian industry is big, and there are many opportunities. College can give you a leg up on whatever it is you want in your horse-related career. Horses are difficult and they take a lot of time and a lot of passion. But if you have that passion and work hard, you can succeed. Don’t ever think that you can’t.

Originally published in the November/December 2015 issue.