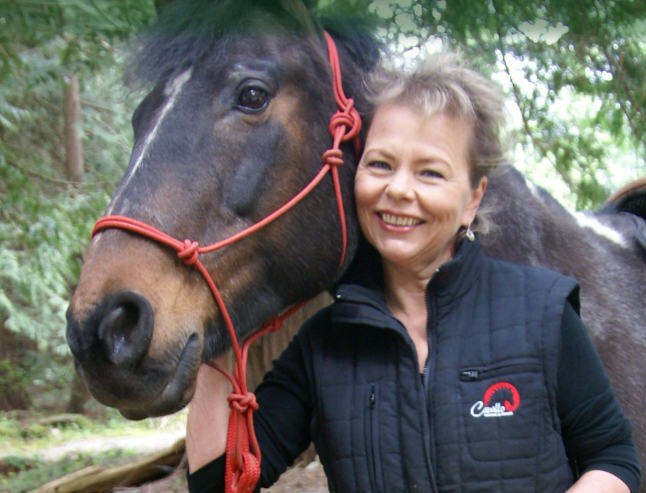 Q: Hi Carole, my horse was just diagnosed with laminitis. I have worked with my veterinarian to develop a plan–and we are ordering new Cavallo hoof boots to help during recovery. Still, I would love to hear your thoughts and experiences. Will I be able to ride again soon without causing him pain? I need a dose of hope.

A: Healing from laminitis can be a tough journey. You’ll find that recovery isn’t always a straight trajectory, but a combination of pieces. You’ll see progress and stagnation, combined. Overall, your horse will feel more comfortable in hoof boots and we hope that he heals as soon as possible. At Cavallo (http://cavallo-inc.com), we often receive stories about how horses have benefited after wearing boots during and after laminitis diagnoses. Most recently, this one came in. You’ll see, you are not alone.

Here’s the real-life story of Luna, who became a barefoot, booted, rideable horse after her first bout of laminitis. Luna’s owner, Debs Parton, looked for solutions to help her horse return to the trail rides they enjoyed together. The 15-year-old bay roan Criollo Gaucho pony (imported from South America) first developed laminitis in August and her owner was able to ride about five months later. I hope this provides you with additional hope and commitment to the process. Parton took careful notes during her horse’s recovery and provided this timeline. Read on to see what she did and how Luna progressed after her laminitic onset.

August: Luna contracted laminitis after the weather was dry then suddenly shifted to rain. The mare lived outside all the time and was slightly overweight. When she looked uncomfortable, Parton called the veterinarian. Radiographs showed pedal bone rotation with just 4 mm clearance from the inside of her sole on her left front hoof. This was the only affected foot. Her metal horseshoes were removed and a gel pad was molded and fit to her left front hoof—attached with vet wrap and tape. The veterinarian recommended constant stall rest with soft bedding for 12 weeks. After that time, she showed little improvement and was stiffening in her hindquarters.

Parton read Founder – Prevention & Cure by Jaime Jackson, a respected author on this subject. She believed in the natural methods discussed and created a plan to implement what she read.

With all bandages removed and her hoof crumbling, Luna was on Bute twice daily. Her digital pulses still hammered.

Parton created a rubber-matted turnout area so that Luna could move more freely and at her own pace. Luna could see the outside world and interact with her environment. This immediately changed the horse’s demeanor—it seemed better for her mental well being.

Parton began soaking the affected foot in salt water for 10 minutes twice daily at feeding time. Luna was eating hay, oats, barley, and a hoof supplement. She also brushed vigorously around the horse’s fetlock area to help increase blood circulation. Parton made sure she had no manufactured foods and had a salt lick available. She also continued soaking Luna’s hoof until the end of November. However, Parton did stop Bute treatments and only administered when digital pulses elevated or if Luna looked uncomfortable.

Luna was allowed access to the rubber mat area as well as the larger gravel pen. She appeared slightly sore again after walking on the gravel and pebbles. Parton put down old carpets on the gravel area so that Luna could walk around in a larger area.

Luna walked in hand around a two-acre field every night to help loosen her back and hindquarters. She was allowed to hand graze a little. Soon, she was lead in circles and serpentines and during short trotting sessions. Luna seemed more confident using her left hoof as the days went on.

Luna stepped out well on soft ground in the field when led. She looked almost sound but was still sore on the gravel areas and when turning sharply. Parton took her on walks down the lane and Luna walked well when traveling in straight lines. She was still sore when traveling on stone. Parton began researching hoof boots that would be good during Luna’s recovery and later, for riding.

Luna was turned out in a large paddock for 10 minutes each morning and evening. She was free to move as she chose. Luna galloped through the field and bucked, reared and pranced. Her daily walks down the lane continued, too. This turnout time was a turning point. Finally, Parton felt hope that there was a chance for a full recovery.

Parton reached out to Cavallo Hoof Boots and immediately received a response. She learned how to measure Luna for new boots for her front hooves. Parton also talked with her farrier, who agreed that trying hoof boots and not hot-shoeing was a good idea.

The farrier helped reduce Luna’s heel and only filed the edges of her feet– leaving the soles intact. The left sole had been convex from the pressure of the pedal bone. Now, it appeared flat and nearly normal. Luna continued on hoof supplements.

Luna needed a size three in the Cavallo Hoof Boots. Parton purchased a pair and the gel pad inserts. The boots arrived at the end of week two.

The Cavallo Hoof Boots fit well. At first, Parton outfitted Luna with a sock beneath the boot to avoid any rubs as the horse got used to the fit. The sole on her left foot now appeared concave and the frog was healthier than before. The bars on the sole were well defined. Growth rings from the coronet band downwards were visible and appeared healthy over a quarter way down the hoof. Hoof walls were strong/robust and appeared much better than the crumbling foot in October.

Parton allowed her to walk around for 10 minutes in the new boots. Luna did not seem bothered by the new feel.

Luna and Parton went for an in-hand walk along the lane. Luna walked out far more confidently than when barefoot and looked quite comfortable.

Parton put a saddle on Luna to get her used to the feeling once again. The horse hadn’t been ridden since August. Luna was unconcerned at this new element and was calm and comfortable.

Parton stepped into the saddle once the horse and rider team returned to the paddock after a 10-minute, in-hand walk. Parton says that she sat quietly and allowed Luna to wander about with no rein or head contact at all. Luna was accepting.

Again, Luna was tacked up for a gentle ride down the lane where she had been hand-walked. She walked out confidently and was sound. Parton was elated.

Between December 27 and January 2:

Luna had three more rides—each one with increasing distance and working up to a two-mile trip. Luna continued to walk out comfortably and with confidence. In addition to riding, Parton continued in-hand walks to keep her moving and allowed her twice daily turnout time in a field. Keeping her moving seemed paramount to her recovery and provided blood circulation to the hoof.

Luna was on the ‘road to recovery’. Parton recommends that anyone try Cavallo Boots instead of metal shoeing for a horse who is recovering from laminitis. “Why would you want to put any trauma on a recovering hoof capsule?” she asks. “The padded sole in the Cavallo boots really helps, too. It allows the foot to breathe, expand, and retract with hot and cold. That’s what the foot is designed to do by mother nature.”

Sign up here for the free newsletter and special community discounts: https://www.cavallo-inc.com/CavalloNews

Cavallo President Carole Herder is the author of the #1 International Bestseller, There Are No Horseshoes in Heaven, and the newly released Hoofprints on The Journey. She has been involved in horse health since 1993. Her company, Cavallo Horse & Rider Inc., develops, manufactures, and distributes horse products in 26 countries. Herder designed and developed Cavallo Hoof Boots and Total Comfort System Saddle Pads. She presents training sessions around the world to teach the benefits of keeping horses in a natural state. Herder is an honored recipient of the Royal Bank of Canada Woman Entrepreneur of the Year Award. She is a member of the Women’s Presidents Organization, supporting female entrepreneurs in every industry.

What Are The Effects Of HHC Vape Pens?

Confessions of an Equine Risk Manager