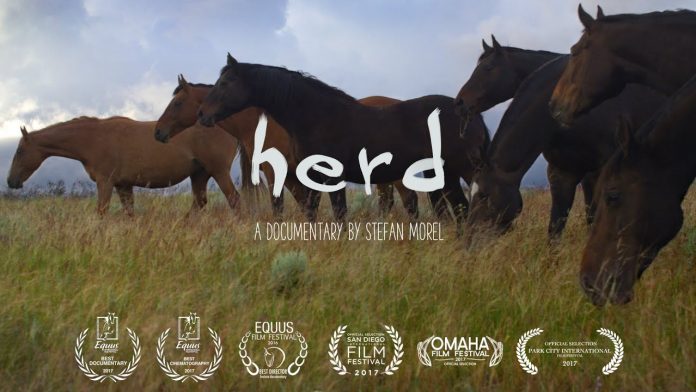 I have known for all of my life that horses can heal. In the past, I have seen horses help people through hard times both mentally and physically. And every kid or teenager knows they can rely on their horse for a much needed break from the world. Those are the ideas explored in the 2016 documentary HERD- A Spiritual Journey directed by Stefan Morel.

HERD follows a group of people who go on a nature retreat to a ranch called “Equinisity” in British Columbia. Throughout their week-long journey these eight people learn to cope with the chaos and darkness that lies on the other side of the fence.

On the website of Equinisity they describe the retreat as a “unique journey inviting each person to find their life path, heart’s desires, and true healing.”

The documentary starts off with peaceful establishing shots of the ranch. Horses grazing, the wind in a horses tail, and the relaxing views of a sunrise peeking over hills are a few of the scenes the audience is greeted with. Then the camera follows the owner of the ranch Liz Ryan as she starts her morning chores.

Ryan talks about her ideas behind starting her ranch as a horse/nature retreat. Saying that her land was called sacred “Dragon Land” by a chamen that she brought to the ranch. Dragon land meaning metamorphosis and manifestation. After Ryan’s own “becoming one with the herd” story she decided to share it with other people. The rest of the documentary is filled with spirit drumming, meditation, multiple scenes of people crying, walks with the herd and one lady who bonded with a cow.

As an audience member, I am someone who looks for new and exciting information I can learn about a topic. That craving for knowledge is what draws me to documentaries.

There was a portion of the documentary that focused on liberty and having a bond with a horse. According to the information given in the documentary, a person’s “aura” can move a horse and make them do what we think. If a person were to think move left or right the horse will simply do so.

Liberty is something that can make a horse and rider one. Many hours spent with a horse can help a team achieve full liberty. However the people in this video have little to no previous horse experience. How was this working?

I decided to test the theories used in the documentary. I put my volunteer horse “Samson” who I’ve been working with for over two months in a halter and lead. I tried to think about my aura and move Samson around similar to the ways used in the film. Instead Samson looked at me with confusion on what I was doing standing there and not giving him treats.

After watching this 51 minute documentary, I enjoyed the cinematography and the music the most. While it might not exactly offer training or liberty tips for equestrians, any documentary about horses is an interesting watch!

Does Your Horse Need a Ration Balancer?

Yoga for Every Equestrian