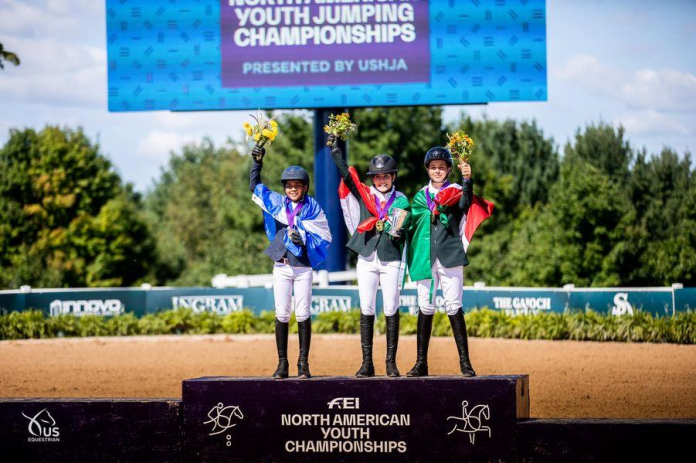 Two rounds of stiff competition would take place throughout the morning, leading only six of the original nine zero-fault riders to produce two more clear rounds to force a jump-off. Hudkins was the first in for the tie breaking round, knocking an unfortunate rail to leave the gold up for grabs. Perez Facusse was next to take on the 1.25m course, setting an incredible time of 33.73 seconds without knocking any rails. His blazing time would prove to be difficult to beat, with Neumann Priess trying his best to overtake Perez Facusse, but falling short on a clear time of 34.57 seconds. Carrillo Watanabe was next to challenge with First Time LS, a 13-year-old CCDM stallion. The young athlete put the pedal to the metal, turning and burning her way through the course to put in a speedy time of 32.93 seconds, leaving all fences fully intact and overtaking Perez Facusse’s lead. Gibbs would be the final athlete on course, but unfortunate faults on course would lead Carrillo Watanabe straight to the winner’s circle.

“It is just amazing! I could not believe that I won. After I jumped the last jump, I knew I had the best time because all of Team Mexico was screaming,” exclaimed Carrillo Watanabe. “[First Time LS] and I have been together for three (3) years. We have obviously had our ups and downs, as I think that everybody does, and it has definitely been a journey. I hope that we can continue to stay together.”

As the only individual rider for Honduras, Perez Facusse rode to the Individual second place honors. The 12-year-old athlete was thrilled with the performance of his 13-year-old KWPN mare, Di Vadine, owned by Jorge Loria, Annette Lora and Diego L. The experience was an emotional one for Perez Facusse, crediting his horse for helping him reach this level and achieve the silver medal.

“I am very proud to represent my country here and the medal is a bonus as I am the only individual rider here. I am very proud and I cried after my round,” shared Perez Facusse. “Two months ago I was jumping .85m, so it was very exciting to jump this today and it is going to be an amazing journey with [Di Vadine].”

Neumann Priess rounded out the top three aboard Corlinus, a 14-year-old KWPN stallion owned by Ralf Neumann. Also representing Mexico, the young athlete was thrilled with his top three finish and spoke highly of his three-year partnership with the stallion. After coming back from an injury, Neumann Priess and Corlinus’ bond is stronger than ever and the pair looks forward to a bright future riding for Mexico.

“We have had [Corlinus] since he was eight years old. He was my brother’s horse before and then sadly he needed to have surgery. They gave him to me to rehab but I kept the horse and we have a connection now – It is a great story. I have had the ride on him for two years now and I have been riding for ten years,” Neumann Priess concluded. “It went great. It always can be better but this [experience] could not be possible without my dad and my mother. They always support me and they always give me advice on how to go forward.”

Immediately following the Children’s competition, the Pre-Junior competitors had their shot at a medal. This is the first year of the Pre-Junior section being offered at FEI NAYC, and all of the competitors were hopeful to take the section’s inaugural gold medal. The United States’ Albelo was the only athlete to begin Saturday’s competition on zero faults, so she knew the pressure was on to remain consistent throughout the final two rounds of competition in order to keep her top spot. She managed to keep her cool during the first round and continue her faultless streak, with Caroline Mawhinney (USA) sitting in the silver position and Mexico’s Xaviera Carrillo Watanabe seated in the bronze-medal spot before the final round.

As the last rider to try her hand at the track and following a streak of clear riders from those sitting behind her, the pressure built up for Albelo to clear the timers with all of the rails intact. In the end she would rise to the occasion, emerging victoriously as the only athlete to ride a fault-less week aboard her very own Cocominka EST, a 10-year-old Rheinlander mare. Riding under the tutelage of show jumping legend Margie Engle, Albelo has been able to learn from her vast experience competing on teams for the United States.

Albelo said, “When Margie [Engle] and I talked [before the second round], she said ‘Get everything out of your head and ride each jump like a single jump. When you cross those timers you keep cantering because anything can change in a single moment.’ That was exactly the plan we rode, especially in the second round where there were even more nerves. Going through those timers and keeping all of those rails up was pretty emotional for me knowing that I had won the gold and would be wearing the gold proud today.”

The top three from the first round would remain the same at the conclusion of the second round, with Mawhinney riding double-clear Saturday to finish on a total of 1.46 faults to receive the silver-medal honors aboard her own Stella Levista. On the 13-year-old Hannoverian mare, Mawhinney said, “Stella [Levista] is best described as ‘tiny but mighty.’ She is so small but tries her heart out in every competition. She is fast, brave and careful – everything you could want in a horse and I could not love her more.”

Rounding out the top three was Mexico’s Xaviera Carrillo Wanatabe, taking home the bronze medal after also riding a double-clear afternoon and finishing on a three-day total of 2.37 faults. She was thrilled with her top-three result, saying, “This was my first time competing at the North American Youth Championships. I have done three or four Nation’s Cups representing my country, but this one was my first time competing at this championship and I am just so very grateful for everyone. Especially Salvador Oñate Barron for letting me ride Con Rouet, and giving me the opportunity to ride such an amazing horse. I am just so grateful to be here!”

Albelo concluded, “We can all agree that this is an incredible opportunity and we are so fortunate to be here and compete here. It is truly unique to give the youth the opportunity to compete as a team. Thank you to all the sponsors who put this on for us, because we really, really appreciate it.”