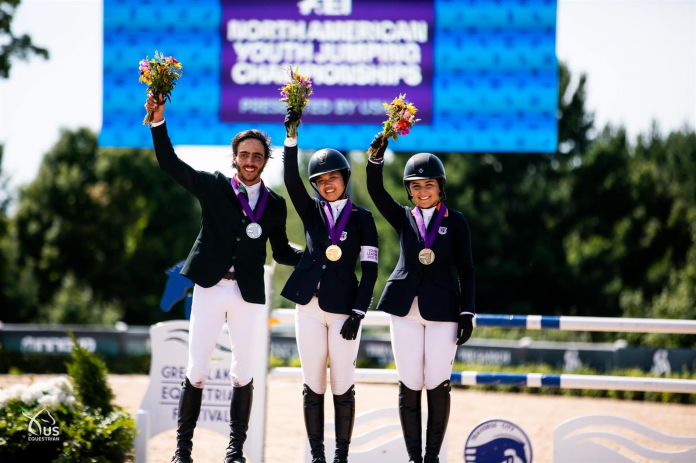 The 2021 Gotham North FEI North American Youth Jumping Championships concluded Sunday afternoon in Traverse City, Michigan at Flintfields Horse Park. After postponement due to the COVID-19 pandemic in 2020, the young athletes were eager to once again participate in the unique opportunity to represent their nation on an international stage. It was Zayna Rizvi and Mimi Gochman who took home the final individual medals of the week, emerging victorious in the Junior Individual Championship and the Young Rider Individual Championship, respectively. With her win, Rizvi secured a quota place for one U.S. athlete to join the North American Team at the 2022 FEI Youth Jumping Competition in Aachen, Germany.

Taking to the International Ring first, 21 Junior athletes had their chance to vie for the top spot on the podium. Ansgar Holtgers Jr. (USA) lead the way headed into the Gotham North FEI North American Youth Jumping Championships $10,000 Junior Individual Championship, sitting on 0.54 cumulative faults from throughout the week. Daneli Miron (USA) followed closely behind on 1.10 faults, while Lea Rucker (CAN) and Zayna Rizvi shared the third place position on 2.46 faults.

As the 18th pair to try their hand at the first round track, Rucker would tip one rail to the ground, putting their third palace position in jeopardy. Rizvi was the next to challenge, crossing the timers without knocking any rails to the ground. Miron would follow, accumulating an unfortunate eight faults to drop out of podium position with Holtgers still left to be seen. With the pressure building for Holtgers to ride another clear round, the young athlete saw one fence drop to the floor, leaving the gold medal up for grabs before the start of Round 2 with Rizvi sitting on top. Rizvi commented, “Coming into the second round, I was definitely nervous and I wanted to go clear really badly. I had to put my nerves aside in order to ride like I know how to ride.”

Returning in reverse order for Round 2, Rucker was the third-to-last on course. Riding her 12-year-old KWPN mare, Rucker put her best foot forward, making it to the finish line without adding to her score. Holtgers entered the arena aboard Elina, Gut Einhuas LLC’s 12-year-old KWPN mare. Replicating Rucker’s impressive ride, Holtgers and Elina would also break the beam without any additional faults, placing them in the leading position with Rizvi still left to be seen. Riding Excellent, a 12-year-old KWPN gelding owned by Peacock Ridge LLC, Rizvi felt the pressure rising as she entered the International Ring. However, her vast experience and partnership with Excellent would not let her down. The pair would leave all the fences intact, naming themselves as the only pair to complete four rounds of competition without acquiring a single fault, and taking home the gold medal at the conclusion of the class.

“It is amazing to be on the podium with two amazing riders here,” shared Holtgers. “I was in the gold medal position and I made a mistake, but I could not think of anyone more deserving than Zayna [Rizvi]. We have been neck-and-neck all year, competing in the same shows and she really deserves this win. I look forward to the rematches!”

Holtgers would ultimately receive the silver medal for his efforts with Elina, who he credits for being a mare that always tries her best. Settling for the third place position, Rucker looked back fondly on her Gotham North FEI North American Youth Jumping Championships experience with Evita. Rucker added, “She is the best horse that I could have ever asked for! I got her in California this year, from Spruce Meadows. We were not really looking for a horse but she came along and it was the best decision that we could have ever made. She wins more than I could hope for and she gave it her all today and she is the best horse that I could ask for.”

With two gold medals now to her name after earning the Junior Team Competition gold with Zone 4, Rizvi is looking forward to the future with Excellent, who she describes as having the perfect amount of blood. Hopeful to compete on more teams in the future, Rizvi was thrilled with the experience and grateful for the opportunity to compete at the Gotham North FEI North American Youth Jumping Championships.

“I made a lot of new friends and I think that we bonded as a team really well. I love doing events like this, where you can practice for bigger things in your future, and this was a great experience for me,” concluded Rizvi. “My horse is so amazing and he always tries his hardest for me.” I want to say thank you to North Run and Arturo [Vidal] and my parents for supporting this dream, Kim [Land], of course, for being the best Chef d’ Equipe and everyone at USEF.”

As the final show jumping event of the afternoon, the $25,000 Young Rider Individual Championship took the spotlight in the International Ring for the last chance to ride for a medal. Leading the pack throughout the entire competition, it was Mimi Gochman (USA) and Celina BH, an 11-year-old Holsteiner mare owned by Gochman Sporthorses LLC, who wore the gold as the only combination to complete all five rounds with no faults to their names.

Prior to the final day of sport, Gochman sat on zero faults with Celina BH. Canada’s Lauren Esdale and Viamdios d’Avril sat in the second place spot on 3.23 faults, and Violet Lindemann Barnett (USA) and Alanine de Vanis followed closely behind on 3.28 faults. The first round of competition would see a shake up in the order, with Mexico’s Daniel Rihan Goyeneche rising near the top for their clear effort, leaving them on their previous 5.18 total. Lindemann Barnett would acquire two time-faults, putting her score at 5.28 right behind Rihan Goyenche. However, Gochman and Esdale would both ride clear rounds, placing them on 0 and 3.23 faults, respectively.

Gochman commented on her headspace going into the final round, saying, “I think since I’ve been riding from such a young age, I’ve been able to handle the pressure pretty well. I’ve always tried to just focus on the actual jumping and not too much of the atmosphere. It’s really exciting here and your blood get’s pumping. I tried to focus on my horse, the jumps, the course and the steps in-between, just really hone in on the actual jumping.”

Keeping focus was the name of the game for the second round of competition, with faults occurring for many throughout the course of the second round. The door would be left open for those lower in the ranking to move up into a medal position. Mexico’s Rihan Goyeneche showed his determination to earn a spot on the podium after piloting La Cantera Stables Inc.’s Chousa Sho Z to a clear and tidy finish. Though Rihan Goyeneche and the 11-year-old Zangersheide mare started the day on 5.18 faults, they would not add any more to their score. Immediately following, Leahy was among those to succumb to the pressures of the second round, incurring 4 faults to leave them her of contention for a medal.

Lindemann Barnett would step up to the plate, learning from her fellow competitors’ previous mistakes and going in confidently to put in fault-free effort. It was up to Esdale and Gochman to decide who would receive the three coveted spots on the podium. Esdale would suffer the same fate as Leahy, slipping down in the ranks after knocking a rail to the ground, ultimately opening medal spots to Rihan Goyeneche and Lindemann Barnett. It was Gochman’s gold to lose, but she closed out the afternoon on a high note, continuing her perfect-streak aboard Celina BH with another impressive clear ride to ultimately clinch the gold medal.

Rihan Goyeneche was ultimately awarded the silver medal for his stellar efforts in moving up the ranks over the three days of competition. He said, “I was really excited and I was really happy with the result. Honestly I just wanted to have a clear round and everything else was a bonus. I feel like it’s a team effort and I’m really happy. It’s the best part of all, having all your friends and family gather around you for special moments like this, it’s amazing.”

Lindemann Barnett would ultimately don the bronze medal around her neck after also moving her way up the ranks, riding the 11-year-old Selle Francais mare Alanine de Vains, owned by AS Sporthorses, E.J. Peeters & Abdel. Just Friday, she was a part of the gold-medal Young Rider team from Zone, and her third-place finish Sunday concluded a successful first time competing for the U.S. at the FEI NAYC. She commented, “It’s incredible. It’s my first time at [FEI NAYC] and I hoped that maybe I would get a medal, but I never imagined two. I owe it all to my horse [Alanine de Vains], I’m thrilled and over the moon.”

Following in the footsteps of her older sister Sophie Gochman, who earned the Young Rider Individual gold medal in 2019, Gochman now owns another gold of her own, after winning gold at the 2019 FEI NAYC Junior Individual Final. Gochman also adds a silver to her collection as well from earlier in the week after giving a strong performance in the $40,000 Young Rider Team Final as a member of the Zone 2 team. To further sweeten her win, Gochman will look forward to competing for the United States on the North American Team at the 2022 FEI Youth Jumping Competition in Aachen, Germany.

The future is bright for Gochman, and she spoke fondly of the team behind her that has gotten her to where she is today. She said, “I have the best team and my horse is phenomenal, I don’t know what I would do without her. She’s literally insane. And my trainer, I would never be here without Ken [Berkley]. It’s exciting to be back [to FEI NAYC], and I really enjoy coming back to learn and grow from all the riders that come as well.”