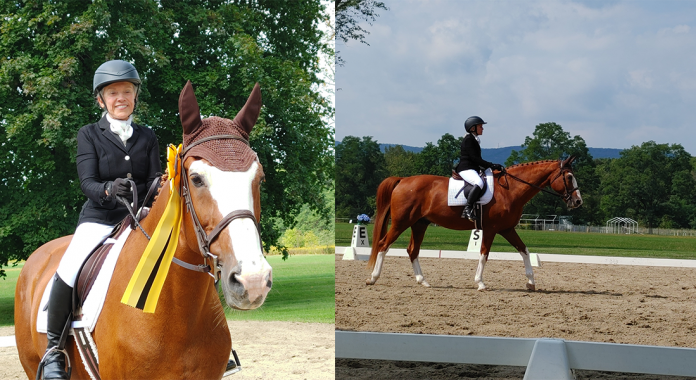 Schenectady, NY—September 20, 2022—A good coach, a great horse, and a top-notch support system added up to a winning equation for adult amateur dressage rider Suzann Bobley, of 18 Karat Farm in Saratoga Springs, NY, who rode Fargo, owned by trainer Laurie Lynn Scott of Squid, Inc., to the highest dressage score of the day (73.125%) for an English rider after their TDF Century Club Introductory Test A on Sunday morning, September 18, at the Stockade Fall Schooling Dressage/Combined Training Show at the historic Stockade Polo and Riding Club in Schenectady, NY.

“It was a wonderful experience and Sue had the biggest cheering section I’ve ever seen at a horse show,” said Scott, who provided her neighbor with her own horse to assure Bobley qualifying for the class, plus some coaching leading up to the test. The morning of the big event, nearly two-dozen friends, fans and family members, including Bobley’s husband, Peter, were ringside to support and celebrate her achievement.

“All the hard work,” friend Erika Guthinger said, “paid off.”

“Fargo carried me in every way,” said Bobley, “as did my friends. I felt really comfortable [throughout the test]. He was so perfect and responsive that he gave me confidence. I was on a super steady horse and I could feel that.

“Laurie’s got all these other classes planned for me now! I’ve got the clothes, so why not?” Before moving upstate from Long Island, she had sold her custom Vogel boots, so the Century Club ride required cobbling together show clothes from something old and something new.

“Laurie lent me her stock tie and found the white breeches for me online. I’ve never shopped on my computer,” she continued. “The jacket I found – in my size – on sale at The Cheshire Horse, and the half-chaps came from Dover.”

The night before her test, Bobley turned to a good book for inspiration: Sally Swift’s Centered Riding. “She has a dressage scale model that helped me go over my own test in my head, not just using my finger in the air, you know?!”

End your test as you began it, with a careful and respectful salute to the judge, writes Swift in her 1985 classic. The quiet, free walk out is important but there is nothing to prevent you from wearing the happy smile you feel inside yourself or from patting your horse to tell them what a dandy job they did even if, by chance, you both had a few not quite perfect moments. They are forgotten. You have ridden a presentable test.

The Dressage Foundation® Century Club, sponsored by Platinum Performance®, recognizes dressage and western dressage riders and horses in North America whose combined ages add up to 100 years or more. At 107 years, the 23 year-old chestnut gelding and his rider comfortably hit that mark, as well averaging collective marks of 7 or better at each letter of their test, and an especial nod on their scorecard for “regularity” in gaits.

This was the second Century Club ride for the Stockade in 2022. At the Summer Heat Show, Nancy Sherbrooke (age 77) moved up to Third Level and earned her USDF Bronze medal on Absolutely Fabulous, aka Hondo (age 25) while completing her Century Club test. A Century Club entry may perform a test of any level and be scored by the judge at the schooling or recognized show. The idea originated with The Dressage Foundation in 1996 at the urging of Max Gahwyler who, riding Prinz Eugen, joined Lazelle Knocke and Don Perignon, as inaugural “Centurion Class” riders.

“The Century Club ride has evolved into a serious endeavor that encourages and rewards senior riders,” said TDF executive director Jenny Johnson. “This club has no dues, no meetings and no agenda except to enjoy the occasion. While we stress the serious nature of riding a test, we want Century Club riders to have fun.”

For newly minted TDF Century Clubbers like Bobley and Fargo, that’s a score measured in miles of smiles.

How CBD Can Help Your Horse Feel Its Best

Find the Secret Behind What Makes Horse Races Exciting