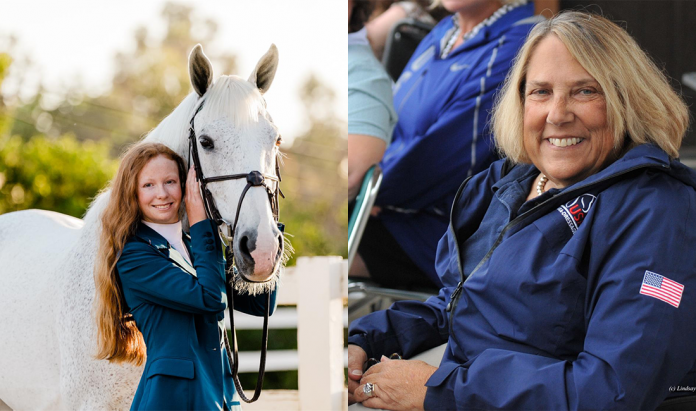 Hope Hand began riding at age 10. She didn’t discover para dressage until she was an adult, when her daughter Amy learned about the sport as part of a school project on the Paralympics. That opened the door to Hope Hand’s life work and lasting legacy in equestrian sport, as both an elite athlete and as a sport leader.

Hand was first alternate to the Atlanta 1996 Paralympic Team and competed at the British Invitational in 1997, earning gold, silver, and bronze. In 1998, she was one of four para dressage riders competing on four separate teams with their able-bodied peers at the USEF Festival of Champions. Hand’s freestyle score broke the tie, earning her team the Bradshaw Challenge Cup. The following year, as a member of the U.S. Team competing at the 1999 World Dressage Championships, she won a bronze medal. Hand also competed at the 2000 Paralympics in Sydney, Australia, finishing fifth in the overall standings.

In addition to serving on the USEF board and on numerous committees, Hand also was president of the United States Para-Equestrian Association. Without her, para-equestrian sport would still be struggling for recognition, funding, and a place on the world stage. She was instrumental in transitioning para dressage into an FEI and USEF sport, and she never missed an opportunity to educate, recruit, or mentor participants, from the grassroots to the elite.

Hand’s tireless support for para dressage and its athletes contributed to the growth of the sport and the success of the U.S. program, including the U.S. Para Dressage Team’s outstanding results at the Tokyo 2020 Paralympic Games.

Hope Hand, a true, lifelong friend of horses and equestrians, passed away on June 12, 2022, leaving a great legacy in para-equestrian sport.

In addition to her impressive results, Wireman demonstrates a strong work ethic, dedication, and willingness to help others. She takes excellent care of her horses and focuses on the enjoyment she gets out of competing rather than blue ribbons. Wireman is known for helping others in a variety of ways, such as loaning her horses to other competitors, cheering up someone having a bad day, and even helping change horse trailer tires when needed.

In addition to the above awards and the Equestrians of Honor, the Pegasus Awards are made up of numerous honors for a renowned group of equestrians.

Reel to Real: 8 Inspiring Stories of Movie Horses You Can...