Home Press Release Brandie Holloway and Any Given Sunday Nab the 1.40m Open Jumpers at... 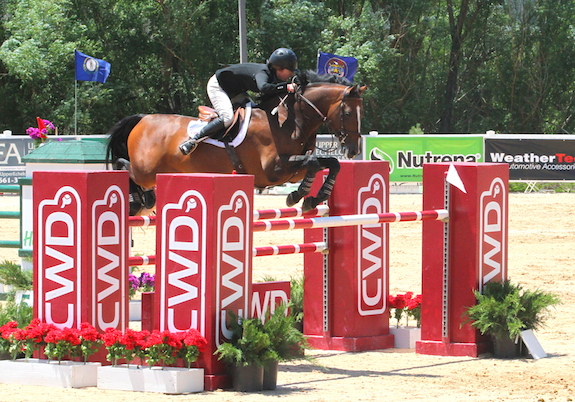 Parker, Co – July 2, 2013 – Colorado Horse Park’s Week IV of Summer in the Rockies got underway today and the Kathy and Brad Coors Family Grand Prix Arena was rocking with show jumping action. The show is a sell-out for the next few weeks, with large numbers of competitors choosing to enjoy the undeniably ideal Colorado weather and the wonderful amenities of the Colorado Horse Park.

In the $2,5001.40m Open Jumpers, Brandie Holloway earned the first place prize despite many weeks without riding her grand prix horse, Any Given Sunday. First she took time to go to Devon where her daughter, top young rider Hunter Holloway, showed her junior hunters and her grand prix horse. Then, their busy schedule took them to Europe where the younger Holloway competed on the Nations Cup Team. Hunter Holloway was accepted into the Gladstone Program with George Morris in Chicago. Since all her horses were still in quarantine on return from their trip to Europe, Hunter Holloway rode her mother’s horse, Any Given Sunday in the week-long program. It turned out to be a fantastic experience for both mother and daughter.

“That program- I cannot say what a great job Diane Carney did and how amazing it was and what a wonderful trainer George is, said Holloway. “He helped Hunter the whole week. George even rode him!”

So, after being out of the saddle for three weeks, Holloway and Any Given Sunday won the 1.40m with a fast and effortless round almost two and a half seconds under Hannah Holik and Cupido de Laubry.

“When I got on him he was like butter.” Holloway said. “Despite my being rusty, my horse was not. He is very capable and covers up what might be harder for an average horse.”

Brown’s track included a vertical / vertical then six or seven-strides (depending) to a triple bar early in the course and a tight turn to a vertical four-stride to a huge CWD oxer late in the course.

“Buddy Brown always sets really good courses,” she said. “He always asks you to ride. You’re not going to get it done by accident. You need to know what you’re doing.” Holik, of Jackson Hole, WY has had Cupido de Laubry since last year and won a 1.40m during Week III of Summer in the Rockies.

“It’s my first week back from an off week that he deserved,” said Holik. “I liked the course. It was pretty straightforward nothing too demanding in scope. It was a nice course to get back in the groove.

For a large horse Cupido de Laubry is amazingly handy, making tight inside turns with ease.

“We’ve been together now for over a year so he can tell, that we’re going to turn,” Holik said. “I can tell him a little bit before and he predicts it. He is getting lighter on his feet.”

In the $2,500 1.30 Open Jumpers, Kim Barone from Watertown, MN and Rival were fifth to go out of 30 and laid down a deceivingly fast round that held the lead for the lion share of the class.

“He can be a little slow because he takes time in the air but he’s so comfortable at that height,” said Barone who travels regularly with her clients to the Colorado Horse Park. “I wanted a good school for the Welcome and the Grand Prix. I just wanted to be efficient. So I wasn’t crazy.”

“He’s been in the money almost every time I’ve done him in the last year,” said Shepherd about Skymiles. “He is ultra careful, ultra fast. He had a little break for the month of June. He feels ready to go. Hopefully he’ll do the Grand Prix, but for sure the Welcome.”

“I think Buddy Brown always does an amazing job,” Shepherd said. “His courses make the horses jump good. If you ride well, the course goes well. The jumps were beautiful.

“I thought the course was super logical,” said Barone. “It made a lot of sense.” Shepherd also took the first place prize in the 1.20m Open Jumpers with Copy Cat also owned by Loretta Patterson, a mare out of the stallion Quilnes.

“I call her my beauty queen. She’s stunning and she nickers every time she sees you. She’s a big talker and she’s the most adorable mare, I’ve ever had. Her name should have been Priceless.”

Shepherd plans to show Copy Cat in the 1.30m on Thursday then, step her up by the end of the circuit. She credits owner Loretta Patterson for her support as an owner and for helping the Accolade business in general.

Holly Shepherd hasn’t been to Colorado in eight years.

“I’ve missed Colorado and I’ve heard nothing but good things, she said. “It looked like the best decision to come out here this year. The footing has been very nice and they have taken care of it really well. The weather couldn’t be nicer.”