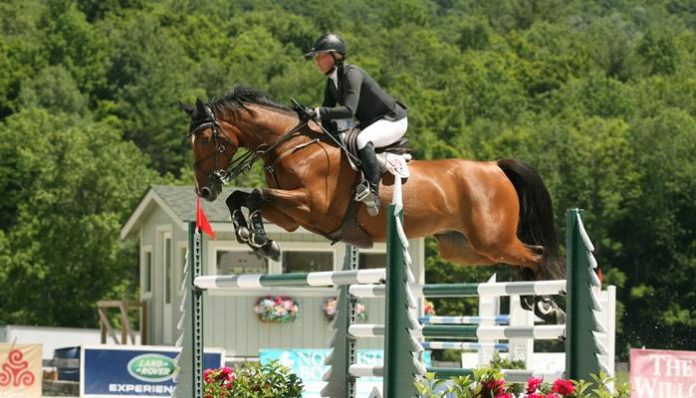 Flint of Long Meadow, NJ, was riding a winning streak into Saturday’s main event, having placed first and second in Thursday’s $10,000 Open Welcome, presented by Manchester Designer Outlets, with Newlight VDL and Chester VDL respectively.  However, it was yet another mount, Superbad, that stole the spotlight to win the first grand prix event of the 2014 Vermont Summer Festival. A total of eight entries found their way to a clear round over the track set by Irish course designer Alan Wade to advance to the all-deciding jump-off.  Jackie McQuade took the early lead with a clear round aboard her big grey gelding, Copilot, to set the time to beat at 41.08 seconds.  It held up until Catherine Tyree shaved almost two seconds off, stopping the timers in 38.90 seconds with Sandor de la Pomme, a 12-year-old Belgian Sport Horse gelding owned by Mary and Joseph Tyree.

Tyree’s lead would be short-lived, however, as the last pair to challenge, Amanda Flint and Superbad, set off to tackle the shortened jump-off track with lightning fast foot speed.  They galloped between fences and tightened up the turns, and when they flew through the timers in 36.01 seconds, the crowd roared in appreciation of their impressive winning effort.

“I just let him go!” said Flint of her key to victory with the 10-year-old German Sport Horse.  “We’ve knocked on the doors a few times, been second and third a couple of times, but he’s never actually pulled through to win anything.  This is the only class he did this week, so maybe he’s just fresh.  He’s got a huge stride, and it was easy for him.”

Flint continued, “We’ve had him since he was six and when he was seven, he was actually second here in a grand prix.”

The Vermont Summer Festival offers a full schedule of hunter, jumper, and equitation competition.  The $10,000 Open Welcome Stake Series, presented by Manchester Designer Outlets, is held each Thursday while the week’s feature event, the $30,000 Grand Prix, takes place each Saturday at 1 p.m.  The $50,000 Vermont Summer Celebration Grand Prix will be held during the sixth and final week on Saturday, August 9.