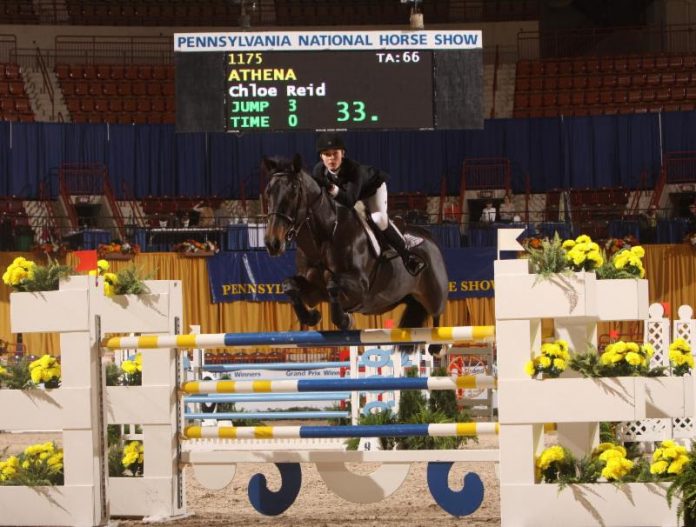 Harrisburg, PA – October 11, 2014 – The third and final phase of the Randolph College/USEF National Junior Jumper Championship got underway this afternoon at the Pennsylvania National Horse Show, which decided the overall Individual Champion and the winners of the gold, silver, and bronze medals.

In Phase III, the top 60% of competitors from Phases I and II who had not been eliminated during either Phases were eligible for Phase III. Each Individual’s faults from Phases I and II were combined together and the starting order of Phase III was held in reverse order of that calculation. The Individual Champion is the competitor with the lowest number of combined penalties after Phases I, II, and III.

20 riders and horses competed over the course designed by Michel Vaillancourt, which was set at 1.45m high and included 13 jumps that required 16 jumping efforts.

Overnight leader Chloe Reid, of Washington D.C., was last to enter the arena with ATHENA, and the duo from Zone 3 jumped a beautiful clear round to clinch the Individual title and the gold medal with a final score of 3 faults.

“This is a goal that all juniors try to qualify for all year long, and to be able to win it is amazing!” said Reid with a grin from ear-to-ear.

“It was definitely a challenging course today compared with the other two days, but I was actually more nervous the first day than today,” said Reid who has just recently moved to Joe Fargis’ facility and trains with Marcus Beerbaum when he is in the country.

With two riders on four faults each and the silver and bronze medals still to be decided, the course was adjusted for the jump-off which included six jumps and seven jumping efforts.

Victoria Colvin of Loxahatchee, FL, was first to attack the jump-off with DON JUAN. The pair produced a fast round in 32.566 seconds, but unfortunately they dropped a rail which added four faults to give them a final score of 8 faults and the bronze medal.

“It’s so exciting because I’ve never made it to the podium in the Individual Championship before!” said Colvin  who helped Zone 4 win the gold medal in last night’s USEF Prix de States Team Championship.

Lucy Deslauriers, of New York, NY, and HESTER kept their cool in the jump-off, and although they had a slower time of 37.635 seconds they left all the rails in place to complete on 4 faults which ensured second place and the silver medal.

“It’s really incredible to be here and to be second – especially to one of my good friends – which feels really good,” said Deslauriers with a smile.

The William C. Steinkraus Style Award, sponsored by Karen Healey Stables, is awarded to the Prix de States Junior Jumper Rider who best exemplifies the American style of equitation, and the respectful, dignified, courteous and workmanlike manner of a true sportsman. Victoria Colvin was honored this year, and she was presented the award by famed Lt. Colonel John W. Russell, who competed at the very first Pennsylvania National Horse Show in 1940 with a horse he bought from the circus. Colonel Russell was a pioneer of the sport of show jumping internationally. He was on the last official U.S. Army Olympic Team in 1948 (London), and on the first “civilian” U.S. Equestrian Olympic Team in 1952 (Helsinki). Colonel Russell was inducted into the Show Jumping Hall of Fame in 2001, and is still very much involved with horses at age 94, and continues to run his 60-horse equestrian center in Texas.