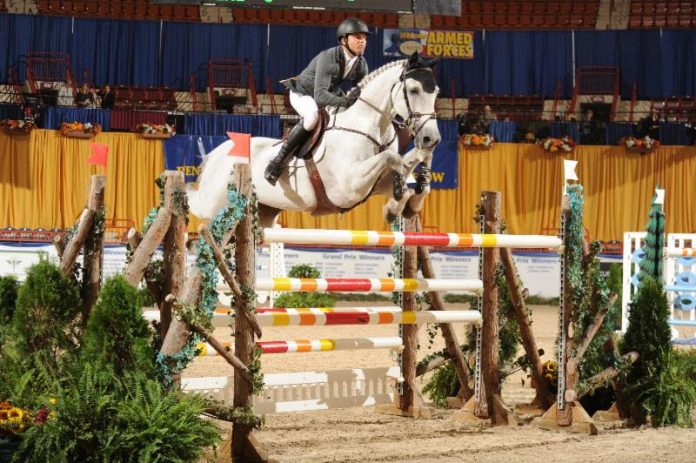 Designed by Michel Vaillancourt, the course was set at 1.50m and included 12 fences and 15 jumping efforts in the first round, which weeded out quite a few competitors as only six riders made it through to the exciting jump-off.

Kent Farrington, top ranked US rider and number four in the world, was first into the ring and set the pace with WILLOW, jumping clear and in the unbeatable time of 35.05 seconds. Farrington took home the $13,200 first place prize money as well as the Second Cannabis Challenge Trophy.

“I was really pleased with him tonight,” said Farrington.

Olympic champion Beezie Madden and her World Cup Champion SIMON also jumped clear but were not quite quick enough, crossing the timers in 36.67 seconds for second place. Ali Wolff and CASALL also produced a clear round, but their jump-off time of 37.39 seconds put them in a final third place.

Prior to the start of the class, the show inducted Irvin ‘Irv’ S. Naylor, into the Pennsylvania National Horse Show Hall of Fame in recognition of his leadership, service, wisdom, and guidance through the years. ‘Irv’ has been an integral part of the PA National for decades, and he has been a member of the Board of Directors since 1989. Irv is considered a ‘Steeplechase Great’ and he has been the National Steeplechase Association’s leading owner by earning for the past three years, and is well on his way to a fourth title.