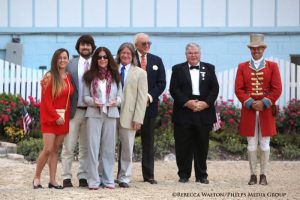 Lexington, KY – June 3, 2016 – The Show Jumping Hall of Fame held its annual induction ceremony on June 2 at The Devon Horse Show. Elizabeth Busch Burke and Katie Monahan Prudent were formally inducted. Susan Hutchison, who was also elected this year, will be inducted in a separate ceremony onJune 12 at the Blenheim June Classic Horse Show in San Juan Capistrano, CA.

The annual induction ceremony pays tribute to select individuals whose contributions to the sport have set them apart and whose influence has had a significant impact on the sport of show jumping and the equestrian community. It is because of the talents, efforts and accomplishments of Burke, Prudent and Hutchison, and what they have brought to the sport, that the Election Committee, comprising some of the nation’s top riders, trainers and officials, voted them as this year’s inductees.

Each Hall of Famer received two specially inscribed items commemorating the occasion – a Tiffany crystal bowl and a specially commissioned silver pin with rubies, sapphires and diamonds. Formally inducting the two inductees at Devon was Peter Doubleday, Chairman of the Board of the Show Jumping Hall of Fame and Museum, Inc. Accepting the honor on behalf of Elizabeth Busch Burke was her daughter Lysa Burke Hutton, an avid rider and equestrian enthusiast herself, and her grandchildren Anthony and Brittany. Walter J. “Jimmy” Lee was present to represent Katie Prudent during the ceremony. Lee served as Prudent’s trainer and mentor during her highly successful junior career and they remain close friends. Elizabeth Busch Burke, daughter of 1988 Show Jumping Hall of Fame inductee August A. Busch, Jr., and wife of 2001 inductee Bobby Burke, was a dedicated competitor, owner and businesswoman. She combined qualities found in both her father, President of the Anheuser-Busch brewing company, and her husband, a highly respected horseman. She was a rider, owner, and leading force in promoting the sport. Her passion for horses and the sport of showing jumping was almost unparalleled.

Elizabeth worked tirelessly to help build show jumping in the United States, leveraging the Anheuser-Busch name to open doors and develop sponsorship and media opportunities. Among the biggest classes that benefited from her support were the American Invitational, AGA Championships, Grand Prix de Penn National, Grand Prix of Devon and the 2000, 2003 and 2005 FEI World Cup Finals in Las Vegas.

In addition to her sponsorship efforts, Elizabeth used her influence to gain unprecedented TV coverage for show jumping on ESPN and other networks that helped expand interest in the sport. Elizabeth also tapped into her creative side by working with Steve Stephens to design the iconic Budweiser bottles and Sea World jumps that drew widespread attention and which spectators still enjoy to this day.

Over the course of her life, Elizabeth was the proud owner of many successful horses, including several hunters shown to championships by her daughter Lysa and by Hall of Fame rider Rodney Jenkins. But it was a Grand Prix show jumper, however, that was the most famous of the horses Elizabeth owned. In 2001, Elizabeth bought Authentic, a 1995 Dutch Warmblood gelding, for Beezie Madden to ride and it proved to be one of the most successful partnerships the sport has ever seen. Among their many victories together was an Olympic team Gold Medal in 2004 in Athens, an accomplishment they repeated in 2008 in Hong Kong after Elizabeth had sold Authentic.

Elizabeth was also a driving force in the creation of the Show Jumping Hall of Fame and she served on its Board of Directors from its inception until her death in 2011. She was instrumental in securing the Hall of Fame’s first home at Busch Gardens in Tampa, Florida.

For more than two decades, Katie Monahan Prudent was one of show jumping’s most successful riders. Her riding career began at age five when she started showing in leadline classes. At first, she competed primarily in hunter and equitation classes where she excelled. In 1969 at the age of 15, Prudent achieved the dream of many junior riders when she won the ASPCA Maclay Finals, one of the youngest riders ever to win it. She then won the AHSA Medal Finals in 1972, making her one of the few to win both prestigious titles.

Following her junior years, Prudent’s career skyrocketed as she became a true sensation. She rode to dozens of grand prix wins across the United States and was equally successful in international competition. In the first-ever FEI World Cup Final, in Gothenburg, Sweden in 1979, she finished second after tying for first with Hugo Simon before losing a jump-off to him. She went on to ride in five more Finals in the 1980s.

Prudent dominated that decade of the ’80s as few other riders have been able to do. She was selected to the 1980 U.S. Olympic team but was denied the chance to compete because of the U.S. boycott. Instead, she rode on the U.S. Team at the Alternate Olympics in Rotterdam where she helped the team to a fifth place finish. She won the American Invitational three times aboard three different horses – Noren in 1983, The Governor in 1985, and Special Envoy in 1988. Prudent was also part of the United States’ Gold Medal team with Amadia at the 1986 World Championships in Aachen, Germany.

Prudent was named the American Grandprix Association (AGA) Rider of the Year three times in the ’80s (1982, 1986, and 1988) and in 1987 was awarded the Whitney Stone Cup for her superior record in international competition and for serving as an ambassador for the USET and equestrian sports.

Prudent also achieved great success training and preparing young riders for top competition. In addition to her son, Grand Prix rider Adam Prudent, she has helped develop such top riders as two-time Olympic gold medalist and 2013 FEI World Cup champion Beezie (Patton) Madden; USEF veteran Kim Prince, the top U.S. finisher (5th) at the 2005 FEI World Cup Finals; Alison Firestone, 1999 Pan American Games team Silver Medalist and the top U.S. finisher at the 1998 World Equestrian Games; USEF veteran Elise Haas, who won the 1999 Amsterdam Grand Prix; and Reed Kessler, who became the youngest show jumping rider to compete in the Olympic Games when she rode for the U.S. in the 2012 Olympics in London. In 2000, Prudent was named Coach of the Year by the U.S. Olympic Committee.

Prudent maintains her base at her Plain Bay Farm in Middleburg, Virginia along with her husband Henri and son Adam. She has previously been honored with induction into the Show Hunter Hall of Fame.

Hutchison has earned victories at some of the nation’s most prestigious horse shows, winning such events as the Los Angeles National Grand Prix and the Grand Prix of New York at the National Horse Show at Madison Square Garden. She also won the Mercedes Challenge Series in 1989.

In 1992, Hutchison was named American Grandprix Association (AGA) Rider of the Year and was voted Rider of the Year by The Chronicle of the Horse. In 1993, she was the first recipient of the Mark Mullen Perpetual Sportsmanship Award of the Pacific Coast Horse Show Association and was Leading Rider of the Desert Circuit Series in Indio, CA.

In 1994 she was selected to ride for the U.S. in the show jumping World Championships at the World Equestrian Games in The Hague. Riding her longtime partner Woodstock, on whom she had earned more than 20 top three Grand Prix placings, she helped the U.S. to a fifth place finish.

In 1995, Hutchison was nominated for the AHSA Equestrian of the Year Award. She was also voted California Horsewoman of the Year by the California Professional Horsemen’s Association (CPHA).

Hutchison began riding at the Flintridge Riding Club with Hall of Famer Jimmy Williams when she was five years old. As a junior, she competed heavily, winning every horseman final offered on the west coast. At age 18 she became a professional, winning countless championships in both the jumper and hunter rings. She has had a hand in the training of many noteworthy young jumpers, including riders like Olympic medalist Anne Kursinski.

Hutchison has served on the U.S.’s Active Rider Committee and was selected to judge the USET Medal Finals in Gladstone, New Jersey. In her 46th year as a professional, she remains an active and extremely successful Grand Prix competitor. She was honored with induction into the Show Hunter Hall of Fame in 2015.

Further information about the Show Jumping Hall of Fame, including the plaques of all previous inductees, is available on line at www.ShowJumpingHallofFame.net.