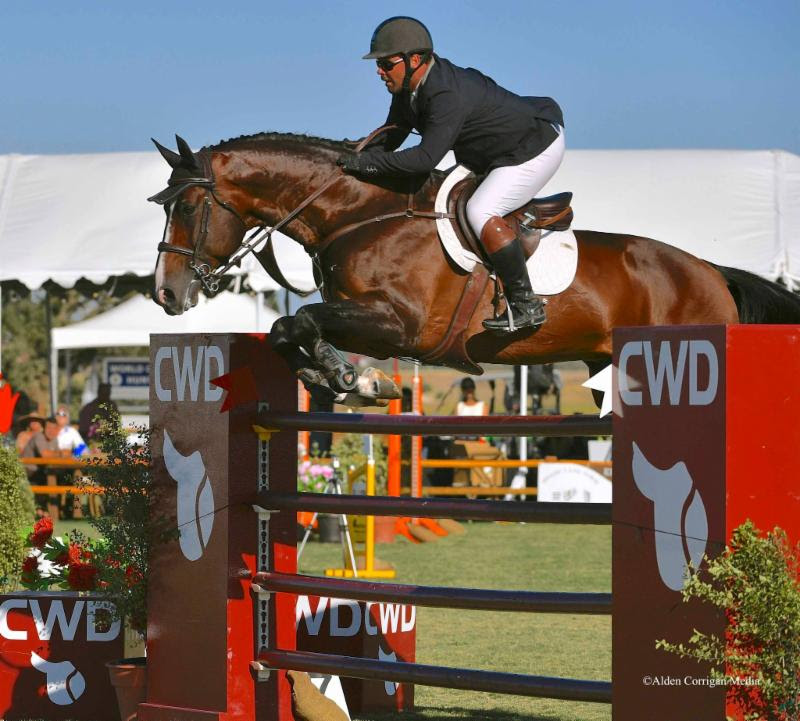 The second week of the Central California Horse Show Series weekend classes wrap up with wins by John French and Small Adventure in the USHJA International Hunter Derby Presented by Cross Creek Farm and Guy Thomas on Jonkheer Z in the CWD Grand Prix of Paso Robles Presented by Travel Paso! “Thank you so much to the Archers, CWD and Travel Paso for their continued support and thank you to everyone who attended the Grand Prix this evening,” said Adrienne Karazissis of West Palms Events. “The weather was beautiful for the event and it was well attended!”

The CWD Grand Prix of Paso Robles Presented by Travel Paso’s course was created by internationally recognized course designer, Catsy Cruz, and took the riders and their horses around the entire Fairway Field Grand Prix on a course that tested speed, stamina and finesse. The course contained 16 efforts including three combinations and long, flowing bending lines.

Kristin Hardin and Nicole Teague’s Firestone S started the CWD Grand Prix of Paso Robles Presented by Travel Paso. Unfortunately, the pair ended up crossing the finish with one time fault to kick off the class. Following Hardin, we saw 13 more horse and rider combinations that acquired faults throughout the trying course. Guy Thomas and Jonkheer Z, owned by Emily Livermore, stepped into the ring and the competition rose to a new level.

The still new team took over the course, clear and in a time of 82.94, putting the first clean ride on the board. It was a full circle moment as Thomas’ father, Butch Thomas, found Jonkheer Z as a seven-year-old for former owner, Karl Cook, and is now back in the Thomas’ care.

In the end, Thomas and Jonkheer Z were the only team to go clean, leaving them with a well-deserved blue ribbon and a happy grin! Congratulations to the team on their impressive ride tonight! Hardin and Firestone S came in second with one time fault and Mattias Ekeroth and Dacarlos rounded out the top three as the fastest of the four faulters.

“Butch has always loved the horse,” said Guy Thomas. “I’m as happy winning this Grand Prix for him (Butch) as I am for myself because he loves this horse so much. He (Jonkheer) is such a gentleman and a pet to have in the barn; I am very lucky to ride such a great horse!”

Results for the CWD Grand Prix of Paso Robles Presented by Travel Paso: The Uryadi’s Village Fundraiser was a hit, with gourmet burgers from Chef Jeffery Scott and supporters pledging money on whether the Uryadi’s Village Jump would be knocked down, or left up, during Saturday’s CWDGrand Prix of Paso Robles Presented by Travel Paso. Exhibitors also enjoyed complimentary tastings from our Official Winery, CaliPaso Winery, and Sculpterra Winery during the fundraiser!

After round one, John French, Hugh Mutch, Hope Glynn, Jamie Taylor, and Jessica Allan made up the top 12 placings to move onto the second “handy” round. A few unfortunate mishaps at the split rail heading back to the Lounge Tent, to a long gallop to their final fence, the high and low natural options, left some top finishers in round one lower in the ranking in the handy round.

John French and Small Adventure, who went first in round one, came out on top after the handy round, with Hugh Mutch taking the second and third placings on Bunistar and Brunswick, respectively! Congratulations to the teams on a marvelous USHJA International Hunter Derby and thank you to our sponsors, Cross Creek Farm for your support!

“Congratulations to John on his great ride and thank you to everyone for supporting the USHJA International Hunter Derby Presented by Cross Creek Farm and the Uryadi’s Village Fundraiser,” said Dale Harvey of West Palms Events.